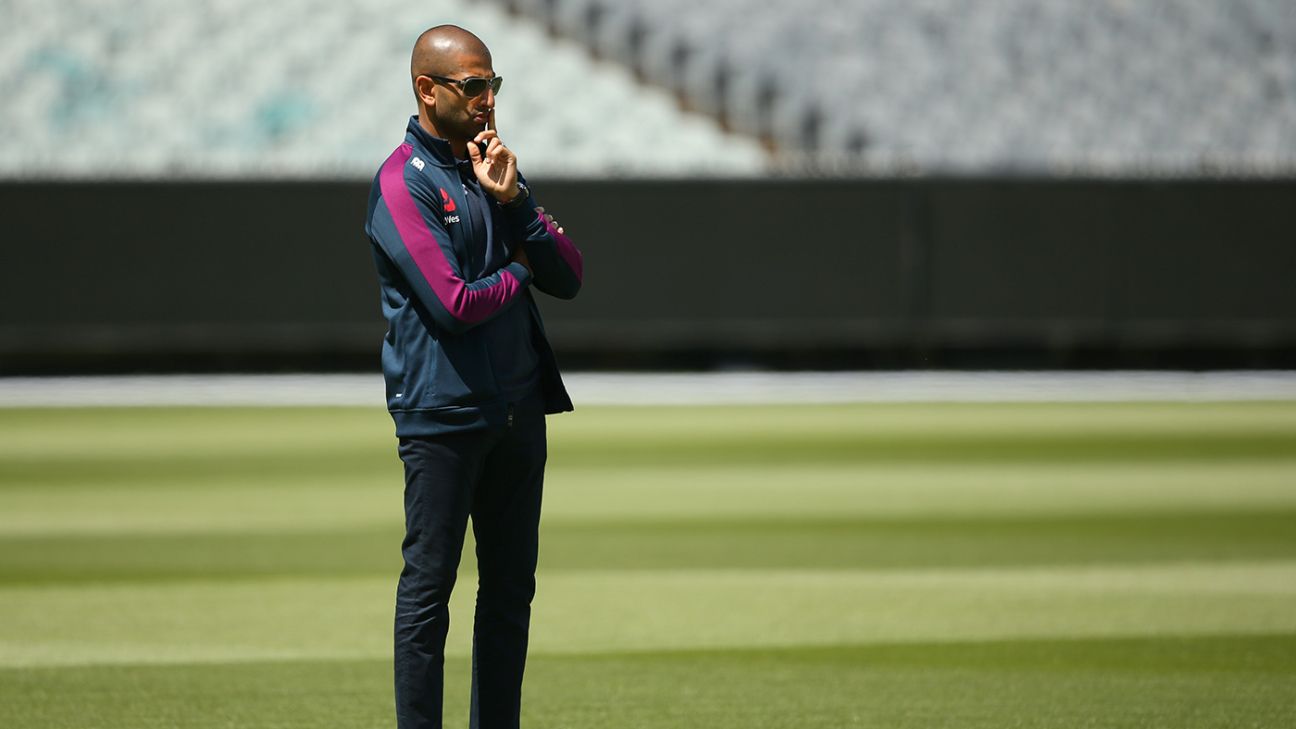 As England’s Test squad assembles for their tour of Sri Lanka – in the wake of a multi-format tour of South Africa, with a home Test summer looming ever larger on the horizon, and with back-to-back T20 World Cups offering a more immediate route to further global glory, it would be easy to park the ECB’s other stated ambition for the current four-year cycle – victory in Australia in 2021-22 – in the file marked “pending”.

And yet, if there’s one lesson to be taken from the abject failure of three of England’s last four campaigns in Australia – and moreover, from the stand-out success of that one campaign to buck the trend in 2010-11 – it is that a failure to get planning months, and even years, in advance is a plan for further failure, full stop.

England have, after all, lost nine out of their last ten Tests Down Under, including a 5-0 whitewash in 2013-14 – the same scoreline by which they were thrashed in the 2006-07 campaign that preceded Andrew Strauss’s stand-out triumph four years later.

And, as Mo Bobat, the ECB’s performance director, pointed out in the wake of a more recent – and equally rare – England Lions triumph over Australia last week, the groundwork that gets laid now will be of fundamental importance to any hope of a repeat success in two year’s time.

For last week at the MCG, an England Lions team featuring a mixture of the tried and the tyros won by an emphatic nine wickets over Australia A, their first victory in an unofficial Test in Australia after seven blank campaigns.

And just as Alastair Cook, Jonathan Trott, Kevin Pietersen et al had batted Australia to a standstill in that famous 3-1 win in 2010-11, it was England’s weight of first-innings runs that proved crucial to their MCG victory. Dom Sibley, fresh from his breakthrough Test tour of South Africa, made 116 out of 428, while Essex’s Dan Lawrence top-scored with 125 – all the while looking as run-hungry as Pietersen himself had been on the England A tour of India in 2003-04 that preceded his own breakthrough year.

For a week earlier in Hobart, Lawrence’s 190 had been the highest of three hundreds in an imposing 613 for 8 declared against a Cricket Australia XI. It seems the virtues of batting time, so alien in the modern T20-dominated landscape, haven’t been completely abandoned by the coming generation.

“I was slightly alarmed when I saw it was the first time we’d beaten Australia A ever,” Bobat said during a briefing at Lord’s after his return from Australia.

“I remember briefing the players at our camp in January. I talked at length about what it takes to win in Australia and the way we wanted to approach getting results. It’s not rocket science, but we talked quite a lot around making the most of first innings.

“Of the four times we had won in Australia over the last 20 years, I think in three of them we scored 500-plus in the first innings, someone had batted for more than four or five hours, and bowlers had put in something like 40 overs in the game – so it was about framing into context what it actually takes to win in Australia.”

Situational experience is a key part of what the England Lions programme has become. As Bobat conceded, their actual playing record in recent years is nothing much to write home about – take the Caribbean tour two winters ago, when a Lions side featuring four members of the current Test squad (Keaton Jennings, Jack Leach, Dom Bess and Saqib Mahmood) were crushed 3-0 in a series that exposed some deep-seated issues with playing and bowling spin overseas.

But as a means of preparing players for the step-up in intensity and expectation that will come at Test level – or to keep them in the bubble between senior assignments, as in the cases of Sibley, Bess and Zak Crawley since the South Africa tour – it offers the sort of finishing school that county cricket, in its current guise, is struggling to provide in its own right, as Bobat himself told ESPNcricinfo back in December.

“In recent years if you purely looked at win percentage, I don’t think our ‘A’ team win percentage would probably be as high as we might have liked it to be,” he said. “But a reassuring thing that I’ve started to communicate this winter, that people have started to get their heads around, is probably moving the Lions from being viewed as a programme that people might pass through on their way to playing for England – which I’m not that keen on as a mantra – to it being a range of experiences and expertise that players can access based on their needs.

“So we might have England players, as we saw this winter, who then drop back down and get a bit more exposure and experience, and then go again.

“Playing a game at the MCG against Australia A felt like something we should try and bank as an experience for them,” he added. “Because we wouldn’t want to get to the Ashes in two years’ time and for them to experience all of that for the first time.

“It isn’t just what you get on the 22 yards, it’s being on that flight for that amount of time, it’s being in that country and dealing with Aussies just in and around the cricket itself. There are a number of things that you get from that that I would put into that relevant experiences category – dealing with the jet lag, walking out of the MCG through the tunnel. All those types of things, to get that first time, when it really matters, is probably asking a lot for a player, so banking some of that earlier is useful.”

For the 2010-11 squad, a lot of that experience came first-hand – meted out by the likes of Shane Warne, Adam Gilchrist and Glenn McGrath in their valedictory triumph four years earlier, and stored away for future reference when Strauss, Cook, Pietersen, Ian Bell, James Anderson et al returned with vengeance aforethought. But it was England’s depth of fast-bowling options, every bit as much as their vast experience, that made the difference in that campaign – giving them leeway to cope with Stuart Broad going lame midway through the Adelaide Test, or for Chris Tremlett and Tim Bresnan to come off the bench for the third and fourth Tests and made fundamental contributions.

“If we fast forward to the Ashes, the period before that we play India twice over five Tests [home and away]. We then go to Bangladesh. Then there’s the World T20 in India. If we think someone is going to play all that, I think that we are probably kidding ourselves”

Having been outgunned last summer by an Australian pace contingent featuring, at various points, such quality quicks as Pat Cummins, Josh Hazlewood, James Pattinson and Mitchell Starc, England know that they have the raw materials to fight back in style in two years’ time, with Jofra Archer and Mark Wood both demonstrating an ability to deliver eye-watering spells of raw pace that can rattle the very best.

But, with both men currently injured, not to mention in high demand in the white-ball formats too, the challenge of broadening England’s fast-bowling stocks is one that Bobat knows cannot be left to chance. In January, the ECB handed the first of a new range of pace-bowling development contracts to Olly Stone, Saqib Mahmood and Craig Overton, a man whose temperament as a Test prospect is rated perhaps more highly than his bowling at present, but whose six wickets at the MCG were a key factor in last week’s Lions win.

“We are making it a judgment on the quality of their current performance and we’re making a prediction on their future potential and all three of those bowlers were deemed to be guys that we thought could add value in the future,” said Bobat. “They are all slightly different, as well. One thing we do know, and we’ve done a huge amount of analysis to understand this, is to be successful all around the world, we need a varied attack.”

Whether that variety needs to be augmented by using the Kookaburra ball in county cricket, however, is a question that Bobat isn’t entirely sold on, despite Joe Root’s recent endorsement of the notion and despite Australia turning to the Dukes in their own preparations for English conditions.

“A personal view is I’m not totally sold on the idea because I don’t think we know how it’s going to behave in this country,” he said. “Our pitches are not as abrasive, so I think we’re making a bit of an assumption. I’m slightly mindful that we play half of our games at home so let’s make sure we are really strong at home, too. If you start to move away from your own strength, there may be some unintended consequences.

“The Ashes isn’t the only thing we plan for, clearly. We’ve got the World Test Championship and we’re very ambitious about what we want to achieve in the two T20 World Cups coming up. “It is my job, though, to help get a broader and richer talent pool, to allow us to be able to select strategically, which will also involve at times giving players a rest.”

Increasingly, those rests appear to be coming in the switch between formats, with England’s Test and white-ball squads containing a range of increasingly specialised players … with a handful of notable exceptions. Key among those, of course, is the kingpin Ben Stokes, a man who produced two of the greatest matchwinning performances of all time at Lord’s and Headingley last summer. On his punishing schedule, Bobat is cautious but clear.

“If we fast forward to the Ashes, the period before that we play India twice over five Tests [home and away]. We then go to Bangladesh. Then there’s the World T20 in India. If we think someone is going to play all that, I think that we are probably kidding ourselves,” he said.

“I’d almost rather not be quoted on this but if we get to a point where Ben Stokes doesn’t have to play in the T20 World Cup because we can prioritise the Ashes that would be a great place to get to.” Planning for all eventualities, even the currently unthinkable ones, is precisely why he’s in his role.