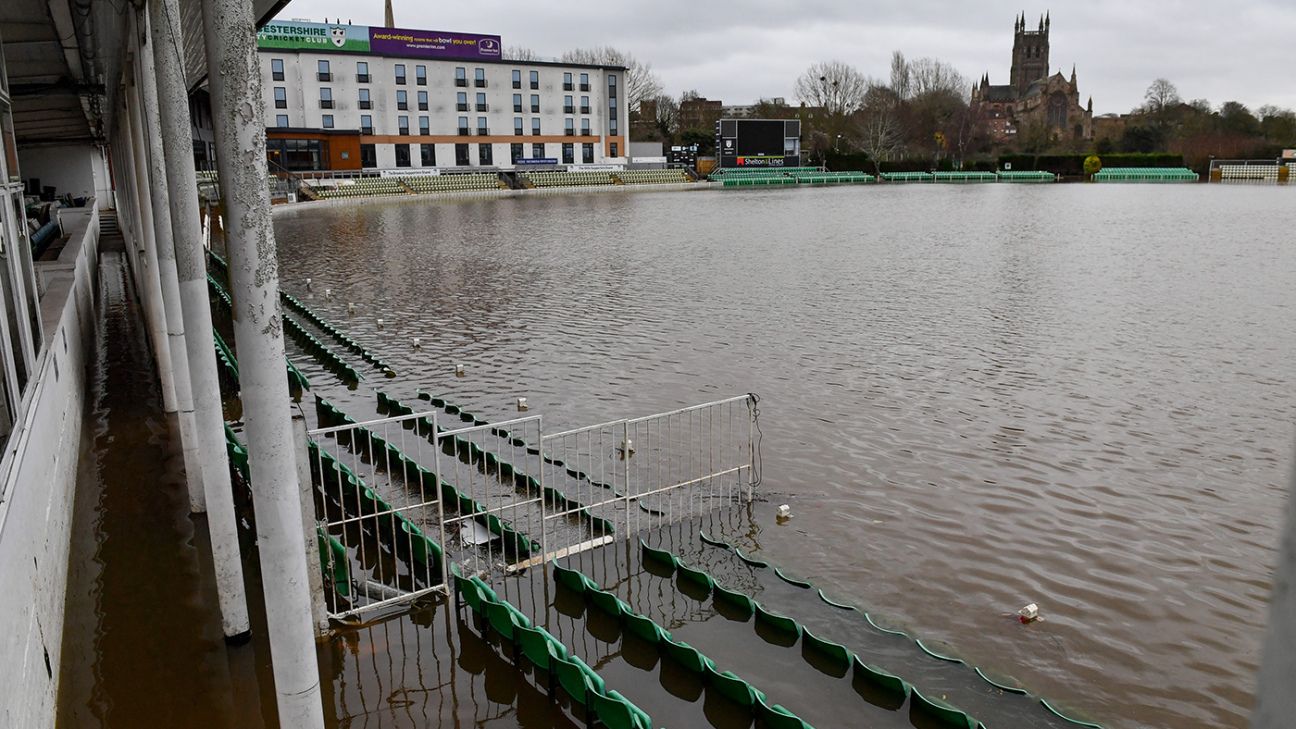 Worcestershire have confirmed that they will play their first County Championship home game of the season at Kidderminster CC, with “unprecedented” levels of flooding leaving it impossible to stage the fixture at their New Road base.

The county played two Championship games at Kidderminster last year after disruption due to floods, and after two more floods since the start of 2020, the first home fixture against Sussex has already been moved to the ground.

Confirmation of the switch came in Worcestershire’s annual chairman’s report, in addition to the news that:

Hira, who was appointed chairman in September 2018, admitted that the increased regularity of floods at New Road was a “concern”, stating that since the end of October 2019, the ground has been under water for 62 days. He also cited the fact that since the start of the 20th century, there have been only three years in which the ground has flooded five times: 2007, 2012 and 2019.

“Due to assistance from the ECB and our insurance policies, our results were not negatively impacted by flooding in 2019,” Hira wrote. “That said we cannot continue to rely upon others to assist us.

“Our focus in the next year is to mitigate the losses of flooding by making sure our cellars, retail, disability access and museum are all above the flood plain.”

The club is also anticipating an extension to the Graeme Hick Pavilion, but does not have plans to install floodlights. New Road is currently the only main county ground not to have floodlights after Taunton installed them ahead of the 2019 season, and their absence led to a farcical exit in the 2015 T20 Blast.

They had targeted an improved year commercially, but Hira confirmed that “regrettably these improvements did not occur”.

Worcestershire recorded a statutory loss (before tax) of £89,000 in 2019, compared to a £124,000 profit in 2018, but after eliminating the impact of flooding, and the positive effects of on-field success in reaching T20 Blast Finals Day to compare like-for-like performance, the club estimated on an underlying basis “that for 2019, the loss increases to £492k which is a very sharp £627k decline in profitability compared to the 2018 results”.

Chief executive Matt Rawnsley left the club without explanation in October 2019, and Hira’s “working assumption” is that he will not be replaced, with poor results leading to a decision to restructure with “more focussed, specific roles and responsibilities”.

With regards to the Hundred, Hira stressed that he did not believe Worcestershire’s financial status was dependent on the new competition being successful.

“One of the key slides I have seen from the ECB is the expectation that all formats of cricket will grow in 2020,” he wrote. “I hope that is the case but this needs to be supported by active marketing and promotion of all formats of the game.

“I do not believe the Hundred is the determinant of financial success for cricket as it is portrayed, it is merely a possible contributor. The often sighted laudable aim is to open the sport up to new audiences. The new TV rights deal secured for 2020-24 at vastly higher levels than the previous agreement (a credit to the ECB) shows that the Hundred accounts for a relatively small component of secured TV revenues (

“The justification often mentioned when discussing the impact of the new Hundred competition is the additional income of £1.3m per year between 2020-24 which all first-class counties like ours are guaranteed to receive. The economics of The Hundred over this period (at least) will not support these levels of payments – it is unlikely to generate enough to pay each county £1.3m.

“Therefore cross-subsidisation is occurring through other income streams secured by the ECB (of which other TV rights accounts for 86% of revenues). My calculations indicate approximately 40% of these additional payments to counties are from other ECB income.

“The largest and most important component of income for the ECB and therefore for ourselves is currently through red-ball, Test cricket. To the purist, hopefully this supports the need and our desire to preserve this format of the game as well as the ongoing need to invest in county cricket.”

With regards to on-field performance, the report lauded Worcestershire’s achievements in white-ball cricket – the club reached the quarter-finals of the One-Day Cup and only failed to retain their T20 Blast title on the last ball of the final – but stressed disappointment at their County Championship struggles.

The club finished ninth in Division Two having targeted promotion, and have won only 23 of 74 games across the last five seasons.

“There are no excuses for 2019 performance but the path to achieving any goal is rarely linear and not immediate especially in sport,” Hira wrote. “The Cricket Steering Group (CSG) led by Paul Pridgeon have reflected and been very self-critical.

“There have been changes and the expectation and hope is of improvement in the coming year.”