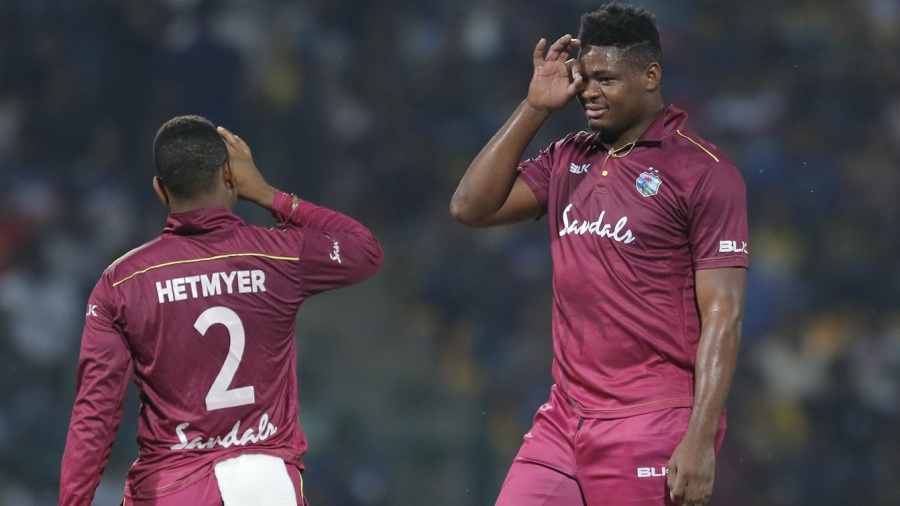 Lendl Simmons batted through the innings, while Andre Russell and Kieron Pollard clobbered Sri Lanka through the middle overs to propel West Indies to a commanding score in Pallekele. Despite a half-century from Kusal Perera, Sri Lanka couldn’t get close – they lost five wickets, all to Oshane Thomas inside the Powerplay. And although Perera and Wanindu Hasaranga did their best to revive the innings, Sri Lanka had lost too much ground against the new ball.

Thomas blasts out the top five

West Indies had an intimidating score on the board, but still there was bowling to be done, and Oshane Thomas settled this match inside the first five overs. It wasn’t the most accurate spell. All up Thomas bowled seven wides. But it was fast and it was hostile, and even on a decent batting track, Sri Lanka’s batsmen (aside from Kusal Perera) could not counter him. Avishka Fernando was the first to be dismissed, by a 140kph bouncer that got big on him, and which he could only top edge to the wicketkeeper. Shehan Jayasuriya was out next ball, chasing a short wide one that he top-edged to third man. Later in that same over, Kusal Mendis would be dismissed as well, when he tried to shovel a leg-side bouncer over his shoulder and could only get glove to it.

Next over, Angelo Mathews holed out trying to bash Thomas over the legside, and Dasun Shanaka went too far across and had his leg stump disturbed by a full delivery. Thomas wasn’t even required to bowl a fourth over. He’d done enough damage with the new ball to swing the game, picking up figures of 5 for 28.

Andre Russell was playing his first T20 international in 20 months. Pollard was playing his 500th T20 game. Together they turned what seemed like it was going to be a good total into a downright commanding one, Russell walloping 35 off 14 balls, before Pollard blasted 34 off 15. So good was the platform the openers had laid that Russell was sent in at No. 4, in the 13th over. He scored only one run off his first three balls, before his innings took off against Sri Lanka’s wristspinners. He smoked two sixes and a four off Lakshan Sandakan, and two sixes and a four off Wanindu Hasaranga in the next over, to seriously raise West Indies’ tempo. He was dismissed by an outstanding Lasith Malinga yorker, but Pollard came in immediately after to ensure no momentum was lost. Pollard was especially good against his Mumbai Indians teammate Malinga, whose last over he reaped three fours from. He hit two other sixes in his innings.

Simmons ties the innings together

Before Dre Russ and Pollard could begin their bruising innings’, Lendl Simmons had laid the groundwork. He was imperious behind square on the offside early in his innings, lacing boundaries between point and third man, before in the final over of the Powerplay, he exploded against Isuru Udana, bludgeoning two sixes over square leg, and two fours through the off side, to reap 20 runs off the over. While Simmons got the innings cooking, Brandon King warmed up too, and joined him for a 74-run partnership off 50 balls, after which a big West Indies score always seemed likely. When the bigger hitters came in, Simmons wisely just strove to turn over the strike. He batted through the innings, but hit his last boundary in the 10th over. Only five of the balls he faced in the second half of the innings were dots, however.

Perera had just got married on Tuesday, but was in the saddle with the Sri Lanka team on Wednesday, producing their best innings. Having opened, he was the only Sri Lanka batsman who seemed to have the measure of Thomas in the early overs, and would hit confident boundaries square on either side of the pitch, to have Sri Lanka in touch with the required rate through the Powerplay.

He eventually joined forces with Hasaranga, who hit sumptuous early boundaries square on the offside, and got settled into a smart innings. The pair’s partnership was worth 87 off 57 balls, but they were dismissed seven balls apart. Perera made 66 off 38 and Hasaranga 44 off 34. There was hope for Sri Lanka while they stayed together, but it unraveled quickly after they were parted.

Powell locks up the middle overs

Part of the reason why the Perera-Hasaranga stand couldn’t quite turn into a match-winning one was down to Rovman Powell, who bowled some cheap overs through the middle. He pitched full – often he didn’t pitch at all, delivering low full tosses. Although his bowling seemed innocuous Sri Lanka’s batsmen couldn’t get him away, his first three overs going for only 16 runs. This meant that although Sri Lanka had a fast start, they couldn’t quite maintain that tempo, despite set batsmen being in the middle. Powell would also pick up the wicket of Thisara Perera in his final over.