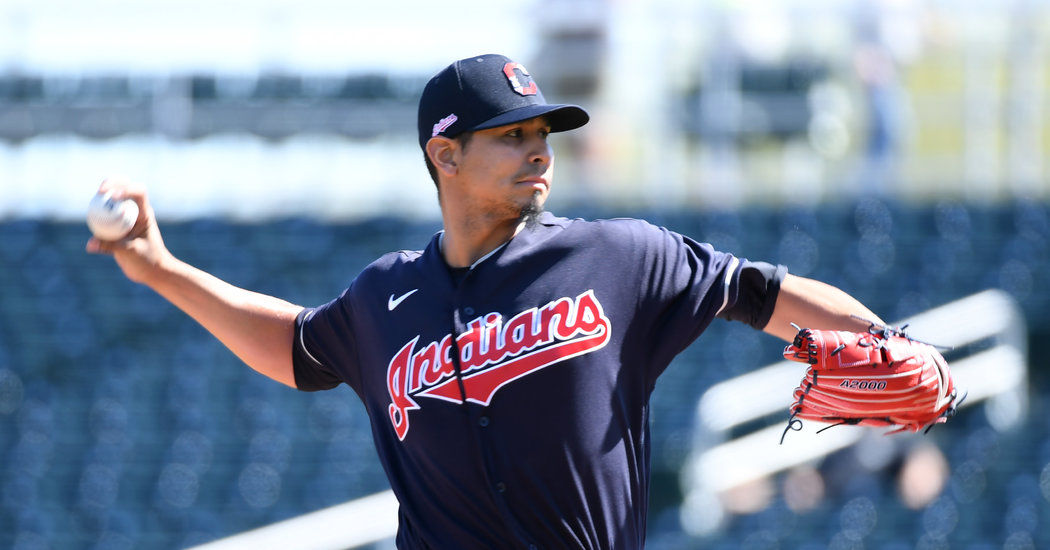 GOODYEAR, Ariz. — Whenever he reaches into his glove for a baseball, Carlos Carrasco sees an image of triumph from a season of trials. Stamped in the pocket of his red Wilson A2000, model B125, is an imprint of himself from Sept. 22, pumping his right fist and roaring on his way to a win in the Cleveland Indians’ final home game.

“I went in in the fifth inning, just trying to get an out, because there was a runner on third base,” Carrasco explained on Tuesday. “I just tried to get a ground ball, and that’s what I did. That’s one of the moments that I feel: ‘This is going on my glove.’”

Carrasco took that glove to the mound on Tuesday at Goodyear Ballpark for his first start since last May, just before he learned the reason for his persistent fatigue: chronic myeloid leukemia. He made 11 relief outings last September after fighting the disease for three months, a stretch that included a stirring on-field tribute at the All-Star Game in Cleveland.

Carrasco, who turns 33 this month, has the longest tenure of any player on the Indians. He arrived as a prospect in July 2009 — when Cleveland traded the ace starter Cliff Lee to Philadelphia — and has been a steady presence on a team that often struggles to keep its stars. He stayed around last summer, too.

“He’d come into the locker room and he was the same happy guy, spreading love and happiness, going to the children’s hospital and making donations, doing all the things he’s always done while still fighting his own fight,” starter Shane Bieber said. “It’s incredible — only Cookie could turn that kind of situation into a more positive situation for others.”

Carrasco’s childlike nickname is part of his appeal, and any team would naturally support a player stricken with cancer. But Carrasco endeared himself to the clubhouse and the community by leaning into his charity work. He met regularly with cancer patients at the Cleveland Clinic, and throughout the year gave lunches to the homeless, scholarships to single mothers and donations to help nursing centers and needy veterans.

He has also donated $300,000 to a Venezuelan refugee camp in Colombia and collected more than 12,000 books to promote literacy for children. Through a foundation he formed five years ago, Carrasco has raised more than $2.7 million, mostly for medical supplies in Venezuela, the Dominican Republic and Puerto Rico.

Concentrating on outreach, Carrasco said, kept him from dwelling on his own plight.

Major League Baseball presented Carrasco with the Roberto Clemente Award at the World Series last fall, recognizing his contributions on and off the field. He was the first player from Venezuela to win the award, which has special resonance among his peers.

“That’s big time,” shortstop Francisco Lindor said. “That shows how good you are on the field but how much better you are off the field. We’re going to play baseball, God willing, for 15-plus years, maybe 20, that’s it. After that, it’s whatever you did off the field, that’s what’s going to represent you. He’s got that on his résumé, and that’s special.”

Carrasco has been something of a hard-luck case for years. In 2012, he missed all of the season after having Tommy John surgery. In 2015, he missed a no-hitter by one strike. In 2016, he broke his hand on a comebacker in September and missed the Indians’ run to the World Series. They lost to the Chicago Cubs in seven games, and the absence of Carrasco — who was 11-8 with a 3.32 earned run average — might have made things different.

Carrasco thrived the next two seasons, going 35-16 with a 3.33 E.R.A. and averaging 10.5 strikeouts per nine innings. He was even better in the playoffs, with a 1.64 E.R.A., but the Indians lost both of his starts and fell twice in the division series. They remain without a World Series title since 1948, an unmatched active stretch of futility.

With Lindor facing free agency after next season — and the budget-conscious Indians unsure if they can sign him for the long term — their best chances might be slipping away. Only six players remain from the 2016 World Series roster, and since last July the Indians have traded the veteran starters Trevor Bauer (to Cincinnati) and Corey Kluber (to Texas).

The Indians’ strength remains their rotation, but if Bieber, Mike Clevinger, Aaron Civale and Zach Plesac join Carrasco — Clevinger is out with a knee injury — Carrasco would have more career starts than the rest of the group combined.

“There’s been quite a bit of turnover; the last three, four years, the clubhouse is looking a lot different, a lot younger,” Bieber said. “That’s not a bad thing — there’s a lot of good that comes with that — but also having that veteran presence, a guy that’s been with the organization for so many years, it’s extremely valuable, especially a guy like that who can lead by example and be the same consistent guy every day. We’re lucky to have him.”

Carrasco has been slowed this spring by a hip flexor strain, but after two innings against the Angels on Tuesday, he said he felt strong and had not been sore for about five days. He lost 18 pounds last year and said he was still a bit light, but believes he can channel his best days.

Carrasco made the best of a trying interlude, an experience that will always distinguish him from others. But on Tuesday he was back to his old job, his past tucked away in a spot only he can see.

“We have an obligation, out of respect to him, to check in with him to make sure he’s doing OK,” Manager Terry Francona said. “But he’s doing everything everybody else is. He looks normal to me.”