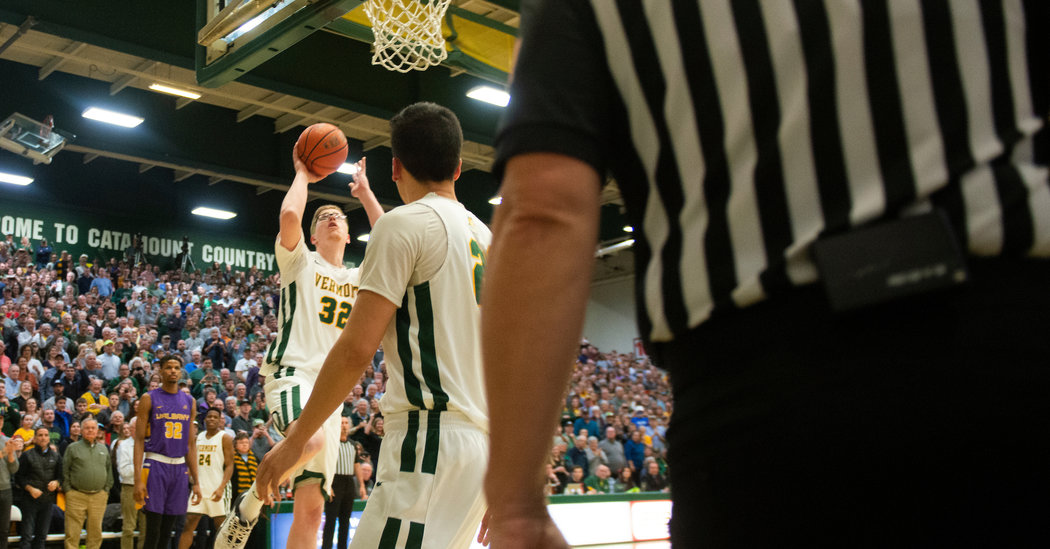 Then there were hugs all around, from players on both teams and Becker. The sellout crowd of 3,266, which included Speidel’s parents, sister Jamie and grandmother Mary Speidel, stood and cheered. Finally, Speidel walked over to thank and hug Brown. Vermont went on to win, 85-62, with Duncan scoring a career-high 22 points and hitting all six 3-point attempts.

“Remembering back to the old days, it meant the world to me,” Speidel said. “I’m forever thankful to Will Brown and Albany for letting me do that.”

Becker said it would have been impossible to envision such a moment when he visited Speidel in the hospital after the accident.

“It’s been five years of him diligently working every day to get better, with the goal of getting back out on the court,” Becker said. “It just fills my heart with joy that that actually happened.”

A 6-foot-7 standout forward at Columbus (Ind.) North High, Speidel’s future changed when a sport utility vehicle crashed into his Honda Accord as he pulled out of a fast-food drive-through in a neighboring town. Neither the passenger in his car nor the adult driver and two children in the S.U.V. were seriously hurt. But Speidel’s head slammed into the door frame, fracturing his skull and leaving him paralyzed on his left side.

After four weeks in a coma, Speidel awoke with no memory of the crash or his entire senior year in high school. He couldn’t walk, talk or use his left arm. With time and therapy, Speidel regained his ability to speak — “Mom” was his first word — and most of his motor function. But he could not play, in part because of periodic tremors in his right arm and short-term memory loss.

Speidel enrolled one year later than his class. He worked out on his own and remained a popular member of the program, sitting on the bench for home games and some road games. Vermont qualified for two N.C.A.A. tournaments in Speidel’s first three seasons, and the 24-7 Catamounts are seeking a third berth later this week as the top seed in the America East tournament.