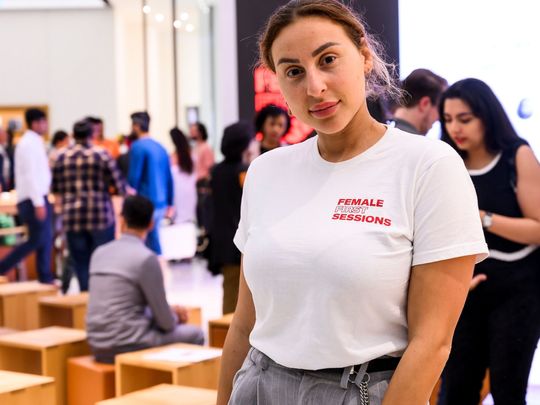 Female First Sessions (FFS) are holding a series of events focused on women creatives this week — and everyone is welcome.

The sessions are set to take place on March 5-8, ending with a night of film screenings on International Women’s Day.

The women-led initiative, which aims to highlight various creatives in the industry, kicked off on March 3 at the Apple Store in Dubai Mall, with a live performance from Sudanese singer Nadine El Roubi and an illustration demonstration by graphic artist Design by Shirls.

“Female First Sessions is a platform that strongly uses the voice of female artists across all different mediums, to create safe spaces and curate positive experiences for everyone,” co-founder Nour Zaghloul told tabloid.

“International Women’s Day and the whole month of March couldn’t be a better time for us to showcase all the talent that we have harvested throughout these past two years in our community platform,” said Zaghloul.

“Last year, we had a lot of local talent. This year, we were lucky enough to expand and see a little bit of growth, including international DJs,” she added.

Asked about the prevalance of all-male event line-ups under the excuse there aren’t enough female creatives, Zaghloul said: “No, it’s not true. There is so much talent. We also have two male DJs on our line-up this weekend, and we have support from both men and women. Generally speaking, it is a heavily male-dominated industry, for no reason, because there is a lot of female talent, and that’s exactly what we’re trying to showcase. It’s up to par, it’s amazing and it should be considered.”

Coming up throughout the week: more music, panels, movies, a poetry slam and one big party to wrap up the festivities.

A panel discussion at Chicago Meatpackers titled ‘The Business of Relationships’ features Alexandra Galani of Investor Dock, Head of FMCG Marketing EMEA at Facebook Naureen Mohammed and founder of SimplyFlawsome podcast Zoe Turner. The session will be moderated by Armin Jamula, the founder and CEO of ItsHERWAY. 2pm onwards. Later that evening, head to Analog Room for night two of the afterparty, featuring seven DJs, including a set by FFS co-founder Quashie (aka DJ Megatronic). (Dh100)

At the first night of Female First Sessions, Sudan-based singer Nadine El Roubi serenaded an intimate crowd with her golden vocals and a mix of hype and low-key originals.

“I’ve always been into music — my dad is a DJ, he came all the way from Sudan [with me], and my mum always played music around the house,” El Roubi said.

Though she brushes off the memory of her first songwriting attempt, she continued writing music discreetly throughout university.

Then she met Sudanese rapper Aka Keyz and recorded her first song at his place. “He looked at me and said, ‘This is what you’re doing for the rest of your life.’”

El Roubi’s musical journey has been most inspired by hip hop, which she now finds ironic.

“I was never allowed to listen hip hop or rap” growing up, she said. “It’s so poetic and beautiful, it should be studied in schools over Eurocentric literature.”

El Roubi has reached more than 11 thousand people with her artistic endeavours on Instagram. She recently uploaded a self-made music video for her track ‘Pac-Man’, writing, “If you ever felt like you might do ANYTHING for something or someone in a way that might not be so healthy, this one is for you.”