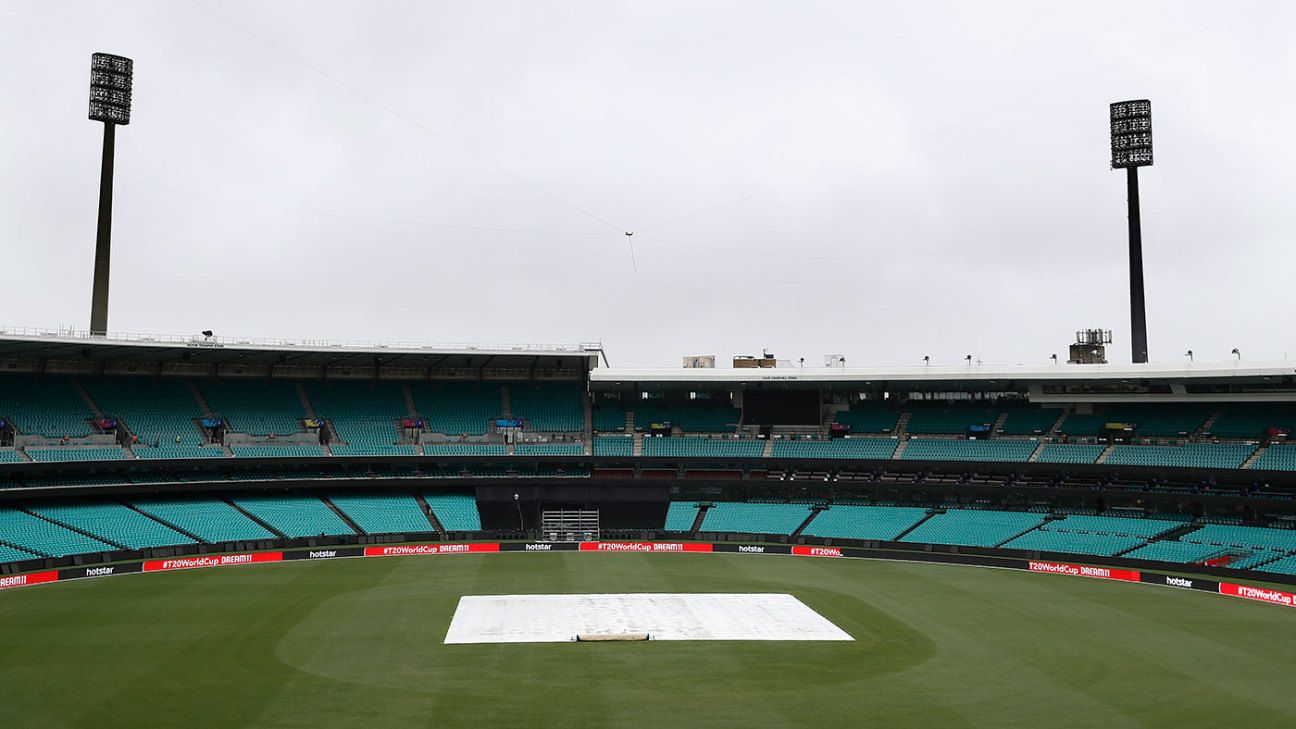 Cricket Australia asked the ICC about whether a reserve day could be added for the T20 World Cup semi-finals with the weather threatening to ruin the double-header day, which would send Australia and England out, but were told it was not possible to alter the tournament playing conditions.

Kevin Roberts, the CA chief executive, revealed the request had been made but understood why it was declined although added that it is an area of the tournament that could be reconsidered in the future.

A minimum of 10 overs per side is needed to make each semi-final a match – up from the usual five-over minimum for T20s – meaning that the weather will need to allow 40 overs for the two games to be completed. If either or both semis are abandoned, the teams that topped the group – India and South Africa – would progress to the final. Australia will play the second game of the day against South Africa and there is a suggestion that the weather may have improved a little by then, following the India-England semi in the afternoon.

ALSO READ: Explainer: What happens if the semi-finals are washed out?

“We’ve asked the question and it’s not part of the playing conditions,” Roberts told SEN Radio. “I respect that because we’ve said the same thing in tournaments that we run in Australia.

“It gives you cause to reflect on how you might improve things in the future absolutely, but going into a tournament with a given set of playing conditions and rules I don’t think it’s time to tinker with that as much as with an Australian hat on I might love that.”

Earlier this season it was thought there was virtually no chance of staging the Big Bash final at the SCG amid a horrendous forecast, but the weather cleared for long enough to play a 12-over match

“We’re optimistic based on the drainage of the SCG, combined with a weather forecast that’s not perfect but not terrible either,” Roberts said. “We’re really hopeful and planning for different scenarios tomorrow night. It reminds me of the lead up to the BBL final a few weeks ago and by way of some miracle we got a 12-over match in. So I think with the drainage of the SCG there’s every chance Australia and South Africa will be playing that semi-final tomorrow night.

“It’d be disappointing for any team for that matter, you want the game to be won and lost inside the ropes rather than won or lost based on the weather don’t you.”

England captain Heather Knight believes that the ICC will be under pressure to add reserve days for future events – there isn’t one for the men’s T20 World Cup either, although there were for the 50-over semi-finals last year which was needed for the India-New Zealand match at Old Trafford – but conceded that the position they are in was largely of their own making after the loss to South Africa at the start of the competition.

“It’s the same for the men’s T20, we did check that this morning, it is strange,” she said. “It will be a shame if it does happen and I’m sure they’ll be a lot of pressure to change that.

“It’s frustrating…it would be nice if we could play in Melbourne. It is what it is, there’s nothing we can do about it. The reserve day would be useful in this situation and it’s a shame for the tournament in general because it’s been great and if both semi-finals are lost it will be a sad time for the tournament. We’d be gutted if that did happen but guess it’s our own fault for losing that game against South Africa. We didn’t top our group and only have ourselves to blame.”

An ICC spokesperson said: “The ICC T20 World Cups are short sharp events where reserve days are factored in for the final. Allowing for any other reserve days would have extended the length of the event, which isn’t feasible. There is a clear and fair alternative should there be no play In any of the semi-finals with the winner of the group progressing.”