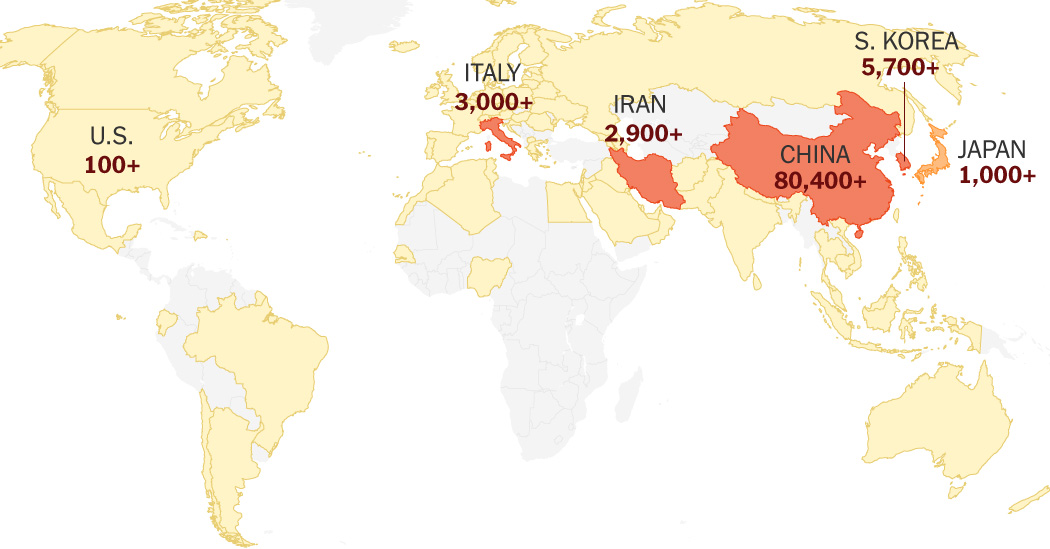 Italy closes all its schools

The country ordered all schools — from day care centers to universities — to shut down until at least March 15 as the outbreak there grew rapidly. Italian students will join hundreds of millions of children who’ve been forced to stay home because of the coronavirus in China, South Korea, Iran, Japan, France, Pakistan, the United States and elsewhere.

The closings are an extraordinary public health experiment, with many ripple effects. The burden is likely to fall particularly hard on women, who across the world still perform most child care duties.

Gao Mengxian, a security guard in Hong Kong, has stopped going to work so she can watch her daughters. Masks are pricey, so she ventures outside just once a week. She spends most of her time helping her daughters, 10 and 8, with their online classes, fumbling through technology that leaves her confused and her daughters frustrated.

A case swiftly becomes a cluster in New York

One coronavirus case, a man of around 50, has quickly led health officials to discover at least nine more infected people around the New York City suburb of New Rochelle. They include the man’s wife and two children; a friend who drove him to the hospital; a friend who was in “close proximity” with the man; the friend’s wife, and three of their children.

Roughly 1,000 people in the area have been told to self-quarantine, including some nurses and doctors at a nearby hospital and people who attended a funeral and a bat mitzvah at a local synagogue.

The man’s daughter’s high school and his son’s college, Yeshiva University, canceled classes; so did New York Law School after a student there reported having contact with the man, who works at a law firm in Manhattan.

Only the man at the center of this cluster of cases has been hospitalized; he was in stable condition and improving on Wednesday. It is unclear how he initially contracted the virus.

Takeaways from the front lines in China

Are cases in China really going down?

I know there’s suspicion, but at every testing clinic we went to, people would say, “It’s not like it was three weeks ago.” It peaked at 46,000 people asking for tests a day; when we left, it was 13,000. Hospitals had empty beds. I didn’t see anything that suggested manipulation of numbers.

Is everyone catching it from everyone?

If you’re in China and think you might have coronavirus, what do they do?

You would be sent to a fever clinic. They would take your temperature, your symptoms, medical history, ask where you’d traveled, your contact with anyone infected. They’d whip you through a CT scan. … Each machine did maybe 200 a day. A typical hospital in the West does one or two an hour.

Who pays for testing and treatment?

The government made it clear: Testing is free. And if it was Covid-19, when your insurance ended, the state picked up everything.

Six Americans who contracted the coronavirus talked about how they’ve coped with the loneliness of quarantines and anxiety over the disease. Here are three tips they shared:

What should you know if you’re pregnant? First, try not to panic: One study found that infants born to women with the disease appeared to be healthy and virus-free at birth.

Going on a cruise? You might be able to cancel, but a doctor’s note could be necessary. If you go, there are stricter hygiene measures onboard. Here are other things to know.

Don’t forget the basics: The most important things you can do are to wash your hands frequently — scrubbing for at least 20 seconds — and avoid touching your face.

I am a school nurse, so it is my job to educate the staff, students and families about the coronavirus. I’m trying to spread information instead of spreading germs! Some people feel that this is not a big deal, some are quite alarmist, and others are spreading misinformation. I’m doing my best to keep everyone calm, but informed.