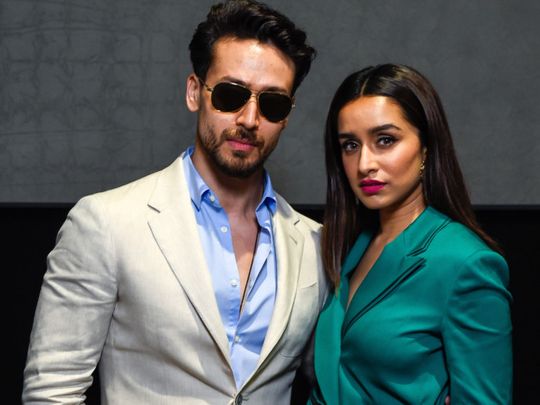 Bollywood action hero Tiger Shroff is back to being a rebel with a murky and worthy cause in ‘Baaghi 3’, out in the UAE cinemas on March 5th. Those who have followed his trajectory as its lead hero of this polarising action drama franchise will tell you that it’s Shroff’s show all the way. In the ‘Baaghi’ (meaning rebel) universe, the men are muscled and the tone is testosterone-heavy.

The hero is back to playing Ronnie, an indestructible force of nature who courts danger and saves damsels in distress. In the original that released in 2016, he took on a kidnapping ring leader, but the stakes have been upped in the latest instalment.

Directed by Ahmed Khan, Shroff takes on Daesh militants in Syria. Accompanying him on his mission is actress Shraddha Kapoor in his third chapter, who returns to the franchise after being away for the sequel. But she’s back in the fold too.

Gulf News tabloid caught up with the lead pair in Dubai last week to talk about their latest film and its long-enduring appeal that critics don’t necessarily get, but his fans lap up. We talked about the evolution of Bollywood action films, their growing fan base among teenagers and more. Here’s what we should know about ‘Baaghi 3’.

1. Tiger Shroff describes ‘Baaghi 3’ as a complete package filled with ‘all kinds of flavours’.

“It’s my first and only film to release in 2020 and it’s a full-on entertainer filled with interesting characters and spectacular action sequences. It’s mounted on a huge scale and has huge action set pieces, but there’s strong emotion in the story too,” said Shroff in a sit-down interview.

2. The emotion that he’s referring to is directed towards his brother, played by Riteish Deshmukh.

‘Baaghi 3’ takes you into the world of Ronnie who comes to his brother’s rescue after he’s kidnapped while on an overseas trip to Syria.

3. The movie was shot extensively in Serbia and the Eastern European country has been dressed up as Syria, a region wrought with tensions and civil strife.

“It was very cold though and we were shooting in minus seven degree Celsius on many days. We shot in live locations mostly, but we also constructed a huge set in Serbia. Whatever you see in this film is real. It’s not a VFX-laden feature. You want the real deal, watch ‘Baaghi 3’.”

4. Shraddha Kapoor plays a feisty woman who has a potty mouth. Kapoor, in the same interview, claimed that it wasn’t easy to swear organically although she had great fun playing this zany character.

“There’s a rhythm to swearing and the trick to make it sound as natural as you can. Her way of swearing is unique,” said Kapoor.

“‘Baaghi 3’ was a great film because I started work on it immediately after ‘Chhichhore’ and my characters were polar opposites of each other. Here, I had to work on my dialogue delivery and how to be feisty,” said Kapoor.

While Kapoor found her role in ‘Baaghi 3’ liberating, Shroff is convinced that ‘War’ and ‘Baaghi 3’ belong to two different worlds.

“In ‘War’, I wasn’t indestructible and my hero [Roshan] destroyed me. I don’t want to outdo ‘War’. My intention is to do something other than what ‘War’ was. That silhouette is very different. ‘War’ was slick and stylised. ‘Baaghi 3’ is very raw and real. It’s man versus machines, man versus man and man versus nature. ‘War’ was more about the clash of the two titans. It was like Batman Vs Superman,” said Shroff.

6. ‘Baaghi 3’ is an ode to the films that crowded the Bollywood landscape in the 1980s and early 1990s, promises Shroff.

“During that era, the audiences were kind enough to give you that liberty to be a one-army hero. They accept you for those spur-of-the-moment action moments. Frankly, I used to look up to those larger-than-life heroes. ‘Baaghi 3’ will spell a return of that 90s and 80s era and appeal to audiences who love such bombastic cinema.”

7. The ‘Baaghi’ franchise, which is high on stunts and daredevilry by the lead hero, doesn’t always curry favour with the critics. But the actors continue to have faith in this universe because they are inevitable money-spinners at the box office.

“My dream is that every film of mine engages and entertains. I want every person in the movie theatres to enjoy the experience of watching ‘Baaghi 3’. We lived an amazing journey while making ‘Baaghi 3’ and what we have expressed so far is just the superficial layer. When you see in the film this week, you will be reacting to the locations and the drama in a hugely different way,” said Kapoor.

8. Both Kapoor and Shroff were born into a family of actors. While Shroff is veteran actor Jackie Shroff’s son, Kapoor is the daughter of actor Shakti Kapoor. But they both take the responsibility of being good actors seriously.

Apart from meeting a bunch of lucky winners who participated in an online Gulf News contest winners for a meet-and-greet with ‘Baaghi 3’ stars, Shroff and Kapoor also made most of their lightning Dubai visit.

As a part of promoting their film, the stars were a part of a meet and greet event at Meydan’s Mohammad Bin Rashid Al Maktoum City in District One on February 28. The stars also enjoyed a boat ride along the world’s largest man-made 7km Crystal Lagoon, before heading for the meet and greet.