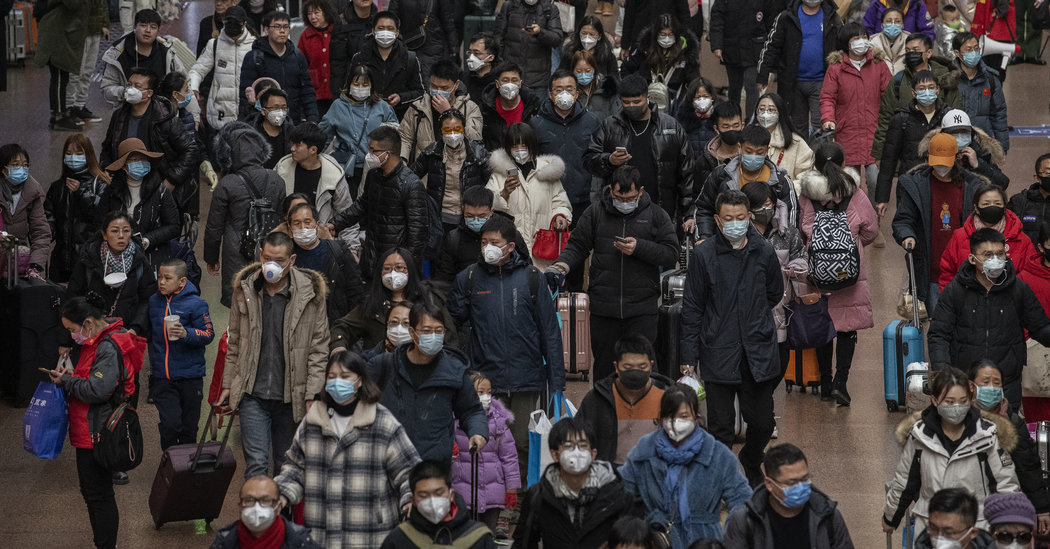 The coronavirus outbreak has radiated to at least 77 countries, killing more than 3,200 people and infecting more than 93,000. It has paralyzed cities and towns, disrupted business, travel and schools. But no place has seen more devastation than China, where the overwhelming majority of deaths and infections have occurred.

The New York Times asked Chinese readers all over the world to share their views on how the country responded to the coronavirus outbreak, which originated in Hubei Province in central China. We heard from readers in Europe, Australia, China and the United States. One was living just miles from the market in Wuhan that is considered by many experts to be ground zero for the virus.

Most expressed serious disappointment in how the Chinese government has handled the crisis. But others argued China, as a developing nation, has responded effectively. Here are some of their stories, edited and condensed for clarity.

‘Government officials are the main culprits that brought about this disaster’

When the outbreak occurred, I was living about three miles north of the Huanan Seafood Market in Wuhan. I must have been one of the first people to have seen and been alarmed by Dr. Li Wenliang’s screenshots on WeChat. That day I immediately ordered masks and disinfectant online for my family, and asked them not to leave our building complex unless there was something urgent. But then because the government dispelled the so-called rumors over and over again and blocked information, almost everyone began to let their guard down, and I was no exception.

No freedom of speech and the misconduct of government officials are the main culprits that brought about this disaster, and made everyone so angry.

‘This outbreak was like a slap in the face’

I came to the United States with my husband, who’s studying here. Now he’s got a job, but I have to stay at home because of a visa issue.

Earlier this year, my husband and I had a serious discussion about our future. He has always felt that the systemic risks in China are too high, so we should not go back. But I’ve felt that for a more comfortable and exciting life there, I’m willing to sacrifice some things, like freedom of speech and internet freedoms. What’s more, I have felt life is short, and in today’s peaceful era, the probability of suffering from systemic risks is so low.

I didn’t expect that two weeks later, an epidemic would break out in China. All the management problems and human-rights issues that have been exposed make me sad and angry. For the first time I realized how important free speech is. This outbreak was like a slap in the face. It totally woke me up and it makes me very sad. I feel that I am growing farther and farther apart from my homeland.

‘China still has the conditions for a democratic revolution’

Before the outbreak worsened, my friends and I all thought that China was a digital totalitarian state that was invulnerable to attack. But all these halos were smashed because of the Chinese government’s chaotic response to the pneumonia in Wuhan.

For me, this crisis exposed the cowardice and recklessness of the bureaucracy of the Chinese government. At the same time, it demonstrated that, in the absence of the bureaucracy, the Chinese people retain strong capabilities to self-govern and self-organize on the grass-roots level. This leads me to believe that contemporary China still has the conditions for a democratic revolution.

‘My parents are deeply brainwashed by Chinese Communist Party propaganda’

As the Chinese Communist Party continuously uses authoritarian means to deal with matters, a humanitarian disaster is happening. I decided to drop everything and escape as soon as possible. But my parents are deeply brainwashed by Chinese Communist Party propaganda. They said that if they are going to die they would rather die here in this land, and live or die with the motherland.

I felt frustrated by this, but at the same time I knew that’s probably what the majority of Chinese people also think. So I bought plane tickets for the next day and decided to leave with my 9-year-old daughter. My wife’s passport is valid for less than six months, and the entry-exit department told us that they’ve suspended all immigration services for Chinese citizens for the time being. So now it’s just me and my daughter here in Thailand.

This epidemic made me sense deeply the split within my family. This division derives from our different views of the C.C.P.

‘The criticisms of China over the epidemic are extremely unfair’

I’m currently a university student in London. I went to Singapore for a job interview. Upon coming back, I developed symptoms associated with Covid-19. As a result, I was tested by the National Health Service and ordered to stay at home. The test results came back negative.

The outbreak has confirmed my belief that when looking at China, one must give it a fair assessment. I believe the critique of China during this outbreak is rather unfair.

When critically analyzing the situation, one must keep in mind, despite all of the development since China’s economic miracle, China is still a developing nation. For a developing country, it has responded quite well. The mobilization of resources in response to the outbreak was only possible in a very centralized government. An infectious disease outbreak, combined with the largest annual human migration, spells a disaster for any country. While critiques of the early handling of the epidemic may be valid, it distorts the picture; no government has ever done so much to contain an outbreak.

Early last year, my wife got accepted to a Ph.D. program at the University of Washington, Seattle. She was pregnant, so she postponed her enrollment from September to March of this year. If it wasn’t for the epidemic, we would have flown to Seattle with our daughter to begin our new life on March 1.

But now because of the ban on travel to the United States, and worries about traveling with our baby, we don’t want to take the risk of going to another country and being quarantined for 14 days. We can only stay home and wish that things improve. We’re facing a dilemma.

‘It is human nature to feel afraid’

I’m a student from Wuhan, studying in Ireland. Ireland isn’t a mainstream destination for Chinese students. There are only two people from Wuhan in this city.

Over Christmas I went back to Wuhan. I returned to Ireland before the epidemic broke out. One week after I came back, Zhong Nanshan announced that there had been human-to-human transmission of the virus. That was right before the Lunar New Year. The Spring Festival gala organized by my school’s Chinese Students and Scholars Association was scheduled for two weeks after I returned. I was a volunteer, and I wasn’t sure if I should go. I sent a message to the chairman of the association, who reassured me. He said I should come since my quarantine period was over. But during the event, I could still sense murmurings of concern. It is human nature to feel afraid, but this still made me feel lonely and sad to be in a foreign land.

‘This is not the most disappointing thing’

I live in the city of Huizhou, in Guangdong Province. But I’m currently in Chiang Mai, Thailand. I had planned to take the Graduate Management Admission Test in February in Shenzhen. But the test was canceled because of the epidemic. So my wife and I decided to go to Hong Kong so I could take the test. I signed up to take the test in Hong Kong, but two days later I was informed that the test was canceled there, too.

We searched for the nearest test site and found it was in Thailand. After our visas were approved, we flew to Chiang Mai. I have taken the test in Chiang Mai, but my wife and I plan to stay here for now.

‘How could you connect me to a virus that originated thousands of miles away?’

I came to Munich from Spain in mid-October last year to continue my studies. Before the outbreak of the coronavirus, I always felt that I was a Spanish resident and emotionally depended on that. After the outbreak occurred, I got a message from my German landlord on the morning of the fourth day of the Lunar New Year. She hoped that I could move out within five days, because her husband was afraid of the novel coronavirus. This was ridiculous. The last time I’d been back to China was last August, and my hometown was not an epicenter of the outbreak. I don’t know how they could connect me to a virus that originated thousands of miles away.

I am currently going to medical school on Long Island, where I am a third-year medical student doing rotation at a hospital. Ever since the coronavirus outbreak, I have heard hospital staff “joking” about pandemics. They taunt about the foods people eat in China, as if all Chinese people are barbarians. They make statements about how Huoshenshan Hospital is actually a concentration camp incapable of taking care of patients. They ignore the Chinese government’s efforts to respond rapidly to the outbreak.

As a Chinese international student, I feel extremely uncomfortable about these false and arrogant comments, and I have personally stood up to one of the nurses, to educate them about what is actually going on.

Media in the United States are not committed to presenting the truth. They usually twist stories in a way that misleads Americans who want to believe China is a horrible place and all Asians have the “Chinese virus.”

I worry from time to time that my patients will refuse to let me examine them just because I am Asian and they thing I am the carrying the coronavirus.