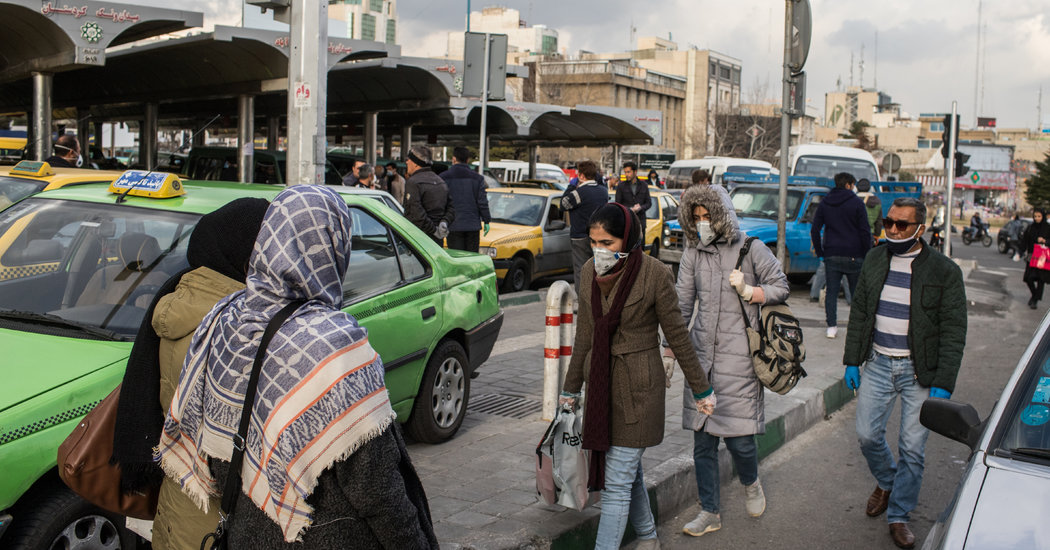 Two weeks ago, Iranian officials predicted the coronavirus would not affect their country — they even bragged about exporting their masks to China and mocked quarantines as “archaic.”

Iran has become the center of the Middle East’s outbreak: The death toll rose to 77, officials said on Tuesday, with the infection count past 2,300 and including nearly two dozen lawmakers. Some officials say even those numbers could be a vast understatement.

Explainer: Here is what to do if you feel sick, tips about how you can prepare and what to know if you’re pregnant. For an informed guide to the outbreak, sign up for our coronavirus newsletter.

What does ‘mild’ really mean?

I caught up with Donald G. McNeil Jr., our infectious-diseases reporter, to ask what it’s actually like to contract the coronavirus, based on what we’ve learned so far from China, which has the vast majority of confirmed cases.

A runny nose only shows up in 4 percent, and that may be people who also happen to have a cold or flu, too.

OK, we’ve been told that 80 percent of cases are “mild.” But you said that can include pneumonia?

Yes. Chinese health officials define “mild” as a positive test, fever, shortness of breath, and possibly even pneumonia, but not so bad that you need to be hospitalized. Once you need oxygen, then you go over into the severe category.

The good news is that a large study from China suggests that less than 1 percent of cases are asymptomatic. Almost all people get sick. But that means that the real fatality rate is something like the fatality rate you see outside of Hubei province, which is between 1 and 2 percent. That’s definitely not good news.

That said, once there’s an antibody test, maybe we’ll get different data.

Facing her ISIS rapist in court

In a historic trial on Monday, a woman from the Yazidi religious minority personally confronted her Islamic State attacker. It was the first time an Iraqi court has brought justice for one of the thousands of Yazidis who were kidnapped, raped and killed by ISIS fighters.

Ashwaq Haji Hamid Talo, above, 20, gave a restrained but searing account. When asked if she recognized her attacker in the room, she replied, “I know him better than I know myself.”

U.S. election: Fourteen states are voting for the Democratic presidential nominee, the largest single day of the primary race. By the time the votes are counted, there could be a clear front-runner to take on President Trump in November. See the latest updates here.

Israel: With 90 percent of the vote counted, Prime Minister Benjamin Netanyahu held a narrow lead in the country’s third election in less than a year, but he was falling short of an outright majority. Here are seven takeaways from the voting.

Russia: President Vladimir Putin proposed a constitutional ban on gay marriage, in what analysts see as a way to raise turnout in a referendum that could help him stay in power.

Germany: Years of warmer temperatures have made German ice wine, produced for nearly two centuries, increasingly rare. This year, industry officials say, there will be none for the first time.

Snapshot: Above, Hideo Kojima, whose bizarre video-game creations have captivated gamers. Our magazine writer explored what gives a game that “Kojima Weirdness”: It “can feel like exploring the deepest recesses of an obsessive and endlessly imaginative mind.”

What we’re reading: From The Guardian, an evening with Mel Brooks and Carl Reiner, who watch “Jeopardy!” and eat dinner together every night. “Still alive, still best friends, still amusing themselves and us,” says Steven Erlanger, a Times diplomatic correspondent in Europe.

Cook: Sam Sifton, our Food editor, is out of town. But, he writes in his latest Cooking newsletter, “I’m looking forward to a return flight, to a run to the greengrocer, to the chance to make Alexa Weibel’s new recipe for creamy Swiss chard pasta.”

Listen: The glossy keyboard chords and layered backup voices of SZA and Justin Timberlake’s “The Other Side” come out of 1980s-vintage Michael Jackson, and haven’t lost their lift. Our critic picks this, and other recent singles.

Read: In “Thin Places,” Jordan Kisner, a bisexual half-Mexican former Christian writer, offers 13 views of the “in between.”

Smarter Living: Follow these steps to create a bedroom where you can get a good night’s rest.

Alexandra Stevenson, a business correspondent for The Times in Hong Kong, has been exploring the global impacts of the coronavirus outbreak. She spoke with Mike Ives, on the Briefings team, about her latest report, on how the shutdown of one of the world’s biggest economies is hurting business around the globe.

Hey, Alex. What was the most striking thing you learned while reporting this story?

How China plays such a big role in the lives of individuals around the world. We read a lot from corporations about how their bottom lines are being hit. We also have heard a lot from policymakers who are worried. But China is the economic center of gravity for so many smaller players, too.

One economist put it this way: We’ve never been here before. Not even in wartime has an economy completely ground to a halt the way China’s did. And the world has never been as integrated as it is today.

You interviewed a truck driver from Mongolia who may need a new job because the border with China has closed. How did you find him?

The truck driver, Battogtokh Uurtsaikh, is someone I met in the Gobi Desert last October. I was reporting a story about how China’s demand for coal plays such a big role in the ordinary lives of Mongolians.

I met Mr. Battogtokh on this highway between Mongolia’s biggest coal deposit and Tsagaan Khad, a dusty border town with China. He was with four other young truck drivers who were working together to fix a flat tire and a broken hub on one of their trucks. They all grew up together and now travel in a pack as truck drivers, each one in his own truck with a walkie-talkie to communicate with each other.

Was he surprised to hear from you again?

Not really. But his circumstances have changed a lot since we found him on the side of a two-lane highway. At the time he was hopeful that this gig would be a temporary steppingstone — a quick way to make good money and pay off his loans. But he hasn’t driven his truck for more than a month.

China’s powerful State Council is introducing measures to help small businesses. Will that indirectly help people like Mr. Battogtokh, whose livelihoods depend on a strong Chinese economy?

China will focus first on fixing its domestic economy, so the money will help businesses in China. Many of these private businesses have suffered for more than a year with difficult cash flow situations because of China’s economic slowdown. It’s hard to see how that financial aid will do much to address the situation for people like Mr. Battogtokh.

It’s the same thing in Thailand, where tour guides say they are thousands of dollars in debt because their Chinese counterparts took off with the deposits paid upfront by Thai tour guides. As the Chicago business owner I spoke with said: “Everyone is desperate for money.”

P.S.
• We’re listening to “The Daily.” Our latest episode is about Super Tuesday.
• Here’s our Mini Crossword, and a clue: Tailpipe emissions (five letters). You can find all our puzzles here.
• The Times received several nominations in the World Press Photo Awards, including Ivor Prickett for his work in Syria and Times videographers for their story on protests in Chile.