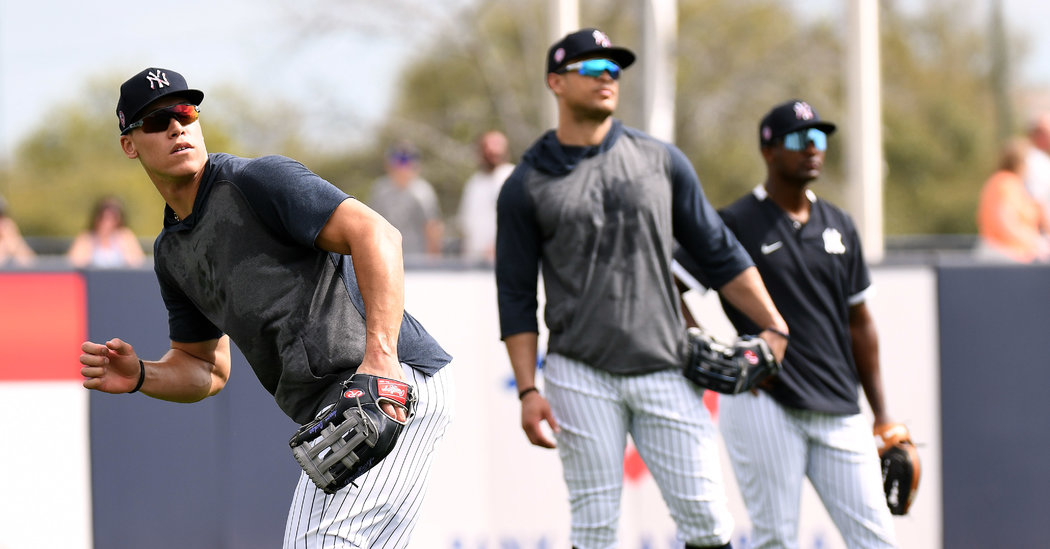 The Yankees are likely to be without two star players, the outfielders Aaron Judge and Giancarlo Stanton, for opening day on March 26 against the Orioles in Baltimore, General Manager Brian Cashman told reporters at the team’s spring training facility in Tampa, Fla., on Tuesday. Both could return as soon as April.

Judge, 27, is the latest key Yankee to be vexed by an injury. What began as right shoulder soreness is now being described as discomfort in his right pectoral muscle. When he began ramping up his throwing and hitting last week, he reported feeling something awry near his chest. The team sent him for a new round of examinations which continued into Tuesday.

Cashman told reporters that Judge was responding well to recent treatments, but the Yankees were still trying to figure out exactly what was ailing him.

Judge’s absence is complicated by Stanton’s continuing health struggles. During defensive drills last week, Stanton, 30, strained his right calf. According to Manager Aaron Boone, it was the lowest grade of a strain on a scale of three, but that didn’t give Stanton much time to be ready for the season’s first game.

The timelines for Judge and Stanton are similar, with the team showing caution for the sluggers, who also struggled with injuries last season.

Judge underwent a magnetic resonance imaging examination last month, when he reported discomfort in his shoulder after throwing and swinging. Boone said at the time that Judge’s test showed nothing abnormal beyond soreness.

After some rest, Judge resumed gradual throwing and hitting programs. But as those increased last week, Judge told the Yankees that he felt something in the area of his right chest. He had yet to take batting practice outdoors or play in a spring training game.

In September, Judge jammed the same shoulder while diving for a ball in the outfield, but he played the rest of the season and postseason. Despite his prodigious talent, Judge has been slowed by injuries. Since being the American League rookie of the year in 2017, he has been limited to 214 games because of a broken right wrist and a torn left oblique.

Things have been worse for Stanton. Since being acquired by the Yankees before the 2018 season, he has struggled to stay on the field. He played in 158 of the Yankees’ 162 regular-season games in 2018, but appeared in 18 last season. In 2019 alone, he dealt with a left biceps tear, a balky left shoulder, a left calf strain, a sprained ligament in his right knee and a right quadriceps strain.

Three weeks into spring training, and the Yankees’ 2020 campaign feels like a continuation of their injury-riddled 2019 season, in which they won 103 games and the A.L. East despite setting a major league record with 30 different players spending time on the injured list. As a result, the Yankees restructured their player health and performance staff, bringing in experts from outside the organization and shifting around some on the inside.

Still, questions about their handling of injuries have persisted. The cause of starting pitcher James Paxton’s lower back pain, which began in September, wasn’t discovered until just before spring training. He had surgery in early February and could return in May.

Luis Severino’s torn elbow ligament wasn’t discovered until a more detailed M.R.I. was performed last week, despite symptoms first appearing during the playoffs in October and persisting enough through the off-season that the Yankees flew him to New York for two examinations. Severino underwent Tommy John surgery last week and will miss all of this season, as well as the start of the 2021 season.

The Yankees’ opening day lineup could be some combination of Brett Gardner, 36; Mike Tauchman, who became a vital player last season but missed the final month of the playoffs with a calf injury; Clint Frazier, who spent most of last season with Class AAA Scranton/Wilkes-Barre because of his defense; and Miguel Andujar, a third baseman who missed nearly all of 2019 with shoulder surgery and is learning to play left field.

Aaron Hicks, another key outfielder, is expected to return sometime this summer from Tommy John surgery.