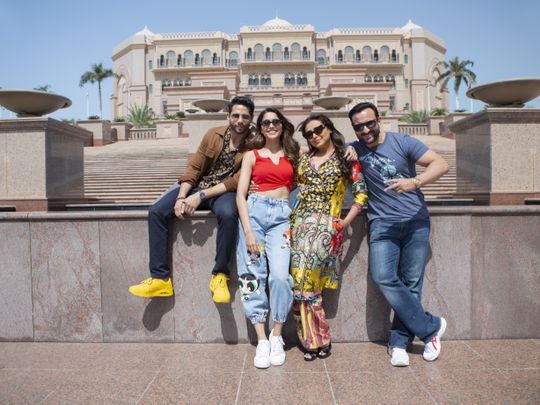 More than 350 cast and crew members were spotted hard at work to make the filming smooth, facilitated by Abu Dhabi’s twofour54 production hub.

The Yash Raj production will introduce Chaturvedi of ‘Gully Boy’ fame as a con man in the much-anticipated sequel. A new face Sharavari, who was discovered two years ago, will also be introduced in the second instalment of this con comedy series that’s high on wit and drama.

The film also reunites Saif Ali Khan and Rani Mukerji and will present them as the original ‘Bunty Aur Babli’ pair in this film. The two have previously delivered blockbuster films such as ‘Hum Tum’ and ‘Ta Ra Rum Pum’.

Produced by Aditya Chopra, ‘Bunty Aur Babli 2’ will be directed by debutant Varun V Sharma, who worked as an Assistant Director in YRF’s blockbusters ‘Sultan’ and ‘Tiger Zinda Hai’.

Abu Dhabi has become a popular destination for Bollywood in recent years, with films including ‘Bharat’, ‘Saaho’, ‘Dishoom’, ‘Race 3’, ‘Bang Bang’ and ‘Tiger Zinda Hai’ choosing the emirate as a filming destination.