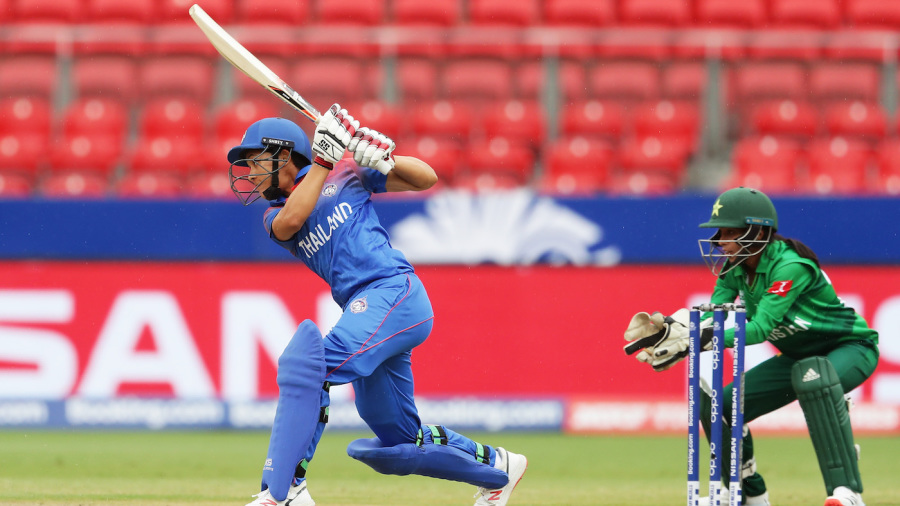 Thailand’s top order put on a blazing display of strokeplay to end their impressive maiden World Cup campaign. They posted their highest T20I score – 3 for 150 – against Pakistan at the Sydney Showground Stadium and then saw the rain come down as soon as their innings ended. It didn’t cease and both teams were forced to split a point each.

That Pakistan had never scored more than 144 while batting second in T20Is had the odds heavily in favour of Thailand, given their strong show while bowling and fielding earlier in the tournament. But they were forced to bid goodbye with only one point from four games.

The Thailand innings was all about their booming and fearless strokes, as Pakistan barely created chances. Diana Baig started strongly after Thailand opted to bat and dismissed Nattakan Chantam with a sharp return catch in her last over but the opener had scored 93 by then. Chantam’s was the team’s first half-century at the World Cup.

The show-stoppers were openers Chantam and Nattaya Boochatham. Even though Pakistan stifled the openers with Baig’s swing and left-arm spinner Anam Amin’s angle from around the wicket, the batters suddenly switched gears after being 0 for 9 in three overs, of which only five came off the bat.

Chantam targeted Amin with four fours in the fourth over that summed up her innings: two caressed beautifully through the covers along the ground and two to clear mid-off. Boochatham took on Baig, who conceded three runs in her first two overs, at the other end with a stylish pull and a loft over mid-off and the two openers didn’t look back from there.

They focused on the ‘V’ down the ground, marked by flourishing drives that cashed in on the fuller lengths and the room the Pakistani bowlers offered. They collected another 14 runs off Aliya Riaz to end the powerplay on 0 for 49, as Javeria Khan was forced to make several bowling changes. By the halfway mark, the openers had scored 76% of their runs down the ground.

As Thailand’s audacious shots continued in the second half, Pakistan’s fielding also came under pressure. After dropping Boochatham at first slip in the second over off Baig, they fumbled a few times both in the ring and in the deep to allow a few extra runs.

To add to that, Boochatham also showed her deft batting against legspinner Syeda Aroob Shah by first driving her against the turn through the covers for four and then sweeping her with the spin next ball when a deep cover was put in place. Chantam, on the other hand, took tiny steps out of the crease to reach the pitch of the ball for her drives and even rocked on the back foot to punch short-of-length deliveries.

Boochatham eventually holed out to long-on off Amin for 44 of 40 that ended the opening stand of 93, Thailand’s second-highest in T20Is. Chantam brought up her third T20I fifty in the next over by whipping a four off her hips behind square on the leg side for her 10th four.

Thailand ensured they didn’t lose any momentum after Chantam’s wicket in the 16th over, for56 off 50. Chanida Sutthiruang and Nannapat Koncharoenkai put away full tosses, and Koncharoenkai’s consecutive fours in the penultimate over off Amin, the second one an unorthodox whip-sweep when she was almost yorked, showed Thailand’s batting approach was well-planned and not a flash in a pan.

They finished on a fighting score but rain spoiled their plans of not being able to defend it against a side that had crossed 120 only once this tournament.