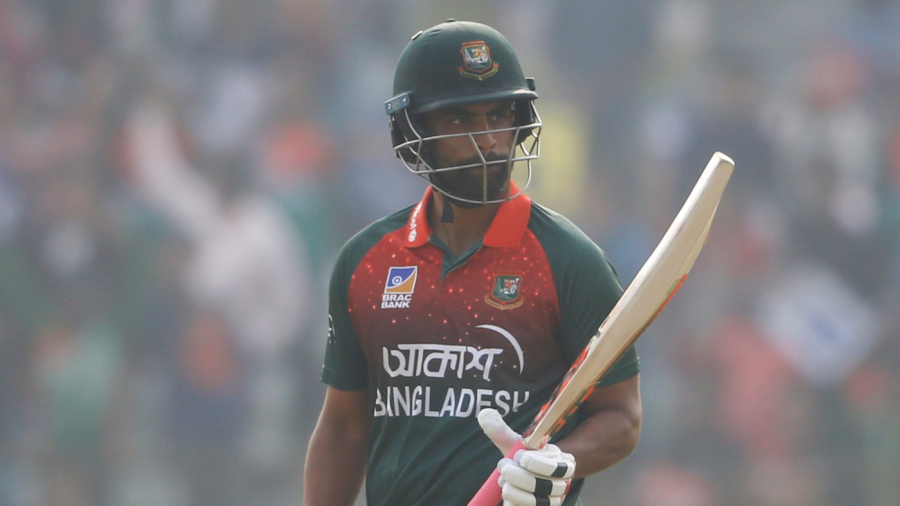 Tamim Iqbal slammed a boundary-laden 158, his first hundred in almost two years, to lift Bangladesh to an imposing 322 for 8 in the second ODI against Zimbabwe in Sylhet. Iqbal spanked 20 fours and three sixes in his innings, a career-best effort for him and also a record high individual score for Bangladesh in this format. Having reached their highest total against Zimbabwe with 321 in the series opener on Sunday, Bangladesh surpassed their efforts on the back of Iqbal’s ton, and Zimbabwe once again face a stiff challenge in their chase under lights.

Iqbal’s approach this afternoon stood in contrast to his approach in the first ODI. On Sunday, he took his time to settle and struck just one boundary in the powerplay. Today, he burst out of the blocks in vintage style, putting Zimbabwe’s seam attack to the sword with ten rasping fours on either side of the wicket inside the powerplay.

His aggression meant that the early run-outs of Liton Das and Najmul Hossain Shanto barely put a dent in Bangladesh’s plans, and both of those dismissals came somewhat against the run of play. Das was caught out of his ground at the non-striker’s end when Carl Mumba palmed an Iqbal drive back on to the stumps in the seventh over, while it was some thoroughly confused calling between Iqbal and Shanto rather than sharp fielding by the Zimbabweans that brought another run-out four overs later.

Indeed, if there was one fault in Iqbal’s efforts it is that his communication with his batting partners left a little to be desired. There was more than one moment of indecision in his third-wicket stand with Mushfiqur Rahim, but Zimbabwe were not able to capitalise on them and the partnership had reached 87 before Rahim holed out to long-on. Rahim led the charge while he was in the middle, working the angles against pace and driving the spinners to frustration with his innovation to collect six boundaries in his 55.

Given the end result, Iqbal’s iffy calling was only a minor quibble, and he also showed how smoothly he could shift through the gears when the situation dictated. His first fifty came in just 42 deliveries, while his second took 64 as Zimbabwe’s spinners wrested back a modicum of control in the middle of the innings. But there was little Zimbabwe could do to prise Iqbal from the crease, and he progressed steadily to his first hundred since July 2018 with a succession of singles, while also becoming the first Bangladesh batsman to go past 7000 runs in ODIs in the process.

With Mahmudullah settling in at the other end, Bangladesh went 59 balls between boundaries before Iqbal flicked Mumba over short fine-leg to open the floodgates in the 39th over. The next over, bowled by Tino Mutombodzi, brought a whopping 24 runs and the momentum shifted firmly back to Bangladesh.

Iqbal shimmied out to smite Williams over midwicket for his second six, ticked beyond 150 with a quick single, and then broke his own record for the highest score by a Bangladesh batsman with a swat that flew over long leg for his third six. He was finally out in the 46th over looking for a fourth, Mutombodzi holding on to a sharp catch just inside the long-off boundary.

To their credit, Zimbabwe’s seamers struck a couple of blows of their own to ensure that Bangladesh couldn’t run completely rampant at the death. Wesley Madhevere held a difficult chance at deep square-leg to get rid of Mahmudullah, snapping an ominous 106-run stand and giving Charlton Tshuma his maiden ODI wicket on debut. Mumba followed up his dismissal of Iqbal with a quick yorker that saw the back of Mehidy Hasan soon afterwards.

Donald Tiripano then struck twice in the penultimate over of the innings, with Mashrafe Mortaza and Taijul Islam both holing out to catches in the deep, but Mohammad Mithun kept up the pace with a rapid cameo. He struck the final ball of the innings for four to finish with 32 not out from 18 balls, with 83 runs having come from the last ten overs.