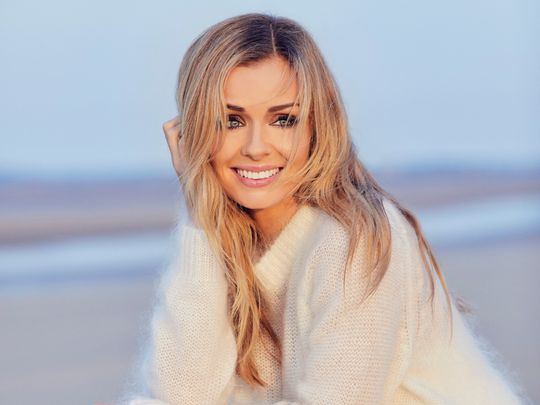 Katherine Jenkins might have some apologising to do to her mum.

Last month, the opera singer cheekily denied she was the Octopus on ‘Masked Singer’, an anonymous talent competition where celebrities compete in disguise and fans guess who’s who.

Days before it was ultimately revealed that Jenkins was in fact the Octopus, she had laughed off the suggestion.

“All I can say is that everybody keeps asking me about this Octopus! I’m like, what is the Octopus? Even my mum asked me on the weekend,” she told tabloid. “She’s like, ‘Are you the octopus?’ I’m like, ‘Mum, I have no idea what you’re talking about!’ My mum is convinced, that’s all I can say.”

Well, Katherine’s mum, it looks like your daughter fooled us all. After being eliminated in the final of the show, Jenkins removed her vibrant pink-and-yellow mask to reveal her identity.

But all is forgiven now, as fans prepare to welcome the bubbly and prolific singer to Dubai Opera on Wednesday night. Her set list includes everything from well-known opera arias, such as ‘Camren’, to Broadway classics like ‘Phantom of the Opera’, and classical renditions of pop songs, including Dolly Parton’s ‘I Will Always Love You’.

Jenkins credits her mum for her persevering work ethic.

“My mum was what they call a mammographer. She screened for breast cancer. She’s still with us, but she doesn’t work anymore; she wasn’t a very ambitious lady, but she was a very hard working lady. She showed my sister and I that you get out of things what you put into them,” said Jenkins.

Coming from a working class background, Jenkins can understand some people’s apprehension towards the exclusive nature of classical music.

“People feel that it’s sort of an elitist art form, which is not welcoming and accessible to them. I have to agree, because when I was growing up, I certainly didn’t see an orchestra until I was in my teens,” revealed Jenkins. “It’s expensive and it can be perceived as an older person thing.”

However, she hopes to change that. After all, she comes from a “very, very normal” background.

“When I got my record contract at 23, it just didn’t seem real. My mum and I didn’t tell anybody because we just didn’t believe it,” she admitted.

“My first performance in public when I was four, at a talent show; my mum taught me a song called Going Down the Garden To Eat Worms, which is a silly song about eating worms three times a day.”

Jenkins says one of her favourite parts of performing today is “having a bit of a laugh” and bantering with the audience.

“For some reason, a lot of people seem to cry at my shows. I don’t set out to make people cry, but you can see that they’re having a moment,” she added.

A moment that has stuck with Jenkins is when the Queen invited her for lunch and nearly sent her into a panic.

“Our family are big royal fans. I’ve been invited to sing there quite a few times, but I was invited one day for lunch,” she recalled/

“When I got there, there were only eight of us, including Her Majesty the Queen and the Duke of Edinburgh. I was the youngest person by far — I was questioning whether my table manners were going to be up to Buckingham Palace standards.”

They brought around the main course, dessert and then a dreaded water bowl that left Jenkins totally puzzled.

“I didn’t know what to do with it. I started to have a panic. I looked to the Queen, and I think she sensed that I didn’t really know what to do, so she very discreetly and kindly showed me that it was a bowl to wash the fruit that they brought around.

“I think I loved her a little bit more after that, because I just thought it was a really kind thing to do.”

Tickets to see Katherine Jenkins in Dubai start from Dh295.