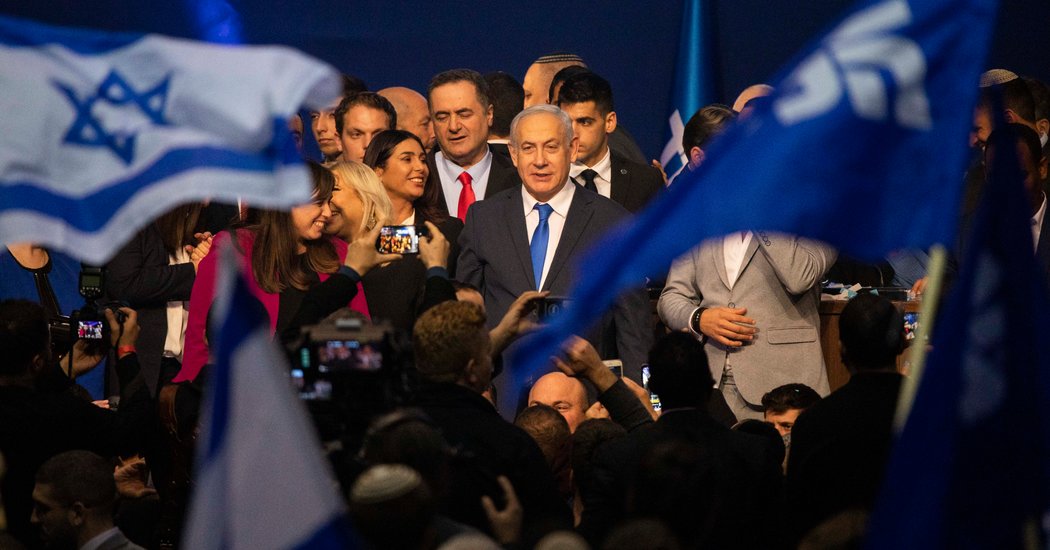 JERUSALEM — With 90 percent of votes counted in the Israeli general election on Tuesday morning, Prime Minister Benjamin Netanyahu was in the lead, but it was still far from certain whether he would win enough seats to form a majority government and end a year of political stasis.

Mr. Netanyahu’s right-wing and religious bloc was projected to win 59 seats — five or six more than that of his main rival, the centrist former army chief Benny Gantz, but still two short of an absolute majority.

The full implications of the election remain uncertain, because the votes yet to be counted could affect the balance of power in Parliament. Here’s what we know so far.

Israel’s political system is still in a logjam.

If the results stand, no bloc has enough seats for a majority in Parliament, not even Mr. Netanyahu’s. All eyes are on Avigdor Lieberman, the leader of an unaligned ultranationalist party that now holds the balance of power.

Mr. Lieberman’s intentions are unclear. As a secular hard-liner, he is leery of entering a coalition with some of Mr. Netanyahu’s ultra-Orthodox allies. He has also previously rejected entering one supported by Arab lawmakers, whose backing Mr. Gantz would require. Yet on Tuesday he ruled out forcing Israel into a fourth election in little more than a year.

“I’m not so sure he knows himself what he’s going to do,” said Abraham Diskin, a politics professor at the Hebrew University of Jerusalem.

Israelis are divided by party, but they lean right when it comes to the Palestinians.

In one sense, the election once again highlighted the persistent divides within Israeli society. Though Mr. Netanyahu emerged slightly ahead, the size of the country’s two main electoral blocs — one mainly religious and conservative, the other secular and comparatively centrist — did not significantly change.

But one theme united many voters: Israel’s approach to relations with the Palestinians.

Both Mr. Netanyahu and Mr. Gantz have declared their support for President Trump’s proposed solution for the Israeli-Palestinian conflict, a proposal that rights groups condemned for neglecting Palestinian interests and annexing large parts of the West Bank.

Mr. Gantz, the leader of the Blue and White party, qualified his support for annexation by saying that it should be completed in coordination with the international community, which largely opposes the move. But as he sought to win over right-wing voters, his stated goal on the issue was broadly aligned with Mr. Netanyahu’s.

Many were willing to vote for a leader under indictment.

Mr. Netanyahu is scheduled to stand trial in two weeks on charges of corruption, in what would be the first prosecution of a sitting Israeli prime minister. Mr. Gantz made those charges central to his election campaign, arguing that Israelis faced a choice between an alleged kleptocrat and a man of morality — one that could make or break the country’s democracy.

But Mr. Netanyahu’s vote share appeared to have risen nearly five points since the previous election in September, suggesting that his court case wasn’t a make-or-break concern for a critical mass of voters.

“The people in the street refused to accept that argument,” David Amsalem, a lawmaker from Mr. Netanyahu’s party, said on a television panel show on Monday night.

A constitutional crisis appears to be coming.

Israeli law isn’t clear about whether someone facing corruption charges can legally form a government.

The Supreme Court delayed ruling on the matter in January, arguing that it was a hypothetical question. But now hypothesis has turned into reality, and the court will almost certainly be sucked into a constitutional crisis that Mr. Netanyahu could frame as an attempt by an unelected judiciary to thwart the choice of the people.

If he does ultimately form a majority government, he may also try to blunt the effect of the trial by decriminalizing the acts he is accused of or by granting himself immunity.

“The big question is: Will he have a big enough majority to avoid a trial?” said Gadi Wolfsfeld, a political scientist at the Interdisciplinary Center Herzliya, a private research college. “If he does get a government that can do that, then we are moving away from what made Israel a true democracy.”

Arabs form about 20 percent of the Israeli electorate but historically have played only a small role in Israel’s Parliament. That changed emphatically on Monday. The Joint List, an alliance of Arab groups, was projected to emerge as the third largest party — with a record 15 seats.

High turnout was reported in Arab-majority areas as residents used the election to express fury at Mr. Trump’s plan, which would cede several Israeli Arab towns to a future Palestinian state.

But the Joint List was also supported by Jewish leftists who felt that the country’s traditional left-wing parties had become toothless.

“I have been voting left for years,” said Judith Posner, 73, a first-time Joint List voter in Jerusalem. “I decided to vote differently this time.”

Mr. Netanyahu is a savvy campaigner.

As a longtime incumbent facing a potentially damning criminal trial, Mr. Netanyahu didn’t have the easiest of hands to play in the campaign. But in the crucial run-up to the vote last week, he managed to prevent Mr. Gantz from setting the terms of debate.

Mr. Netanyahu steered the national conversation away from his corruption charges with insinuations about Mr. Gantz’s personal life, an embarrassing leaked recording of one of Mr. Gantz’s advisers, and a series of eye-catching government responses to the coronavirus.

In the run-up to Israel’s third election in less than a year, there were fears that turnout would plummet amid electoral burnout and anxiety over contracting the coronavirus, of which the country had a dozen confirmed cases by Tuesday.

But turnout provisionally rose to 71 percent, up from 69.8 percent in September and the second-highest rate this century.

Pundits speculated that the coronavirus had convinced more Israelis to remain in the country on Election Day. Others attributed the rise to a spike in Arab turnout.