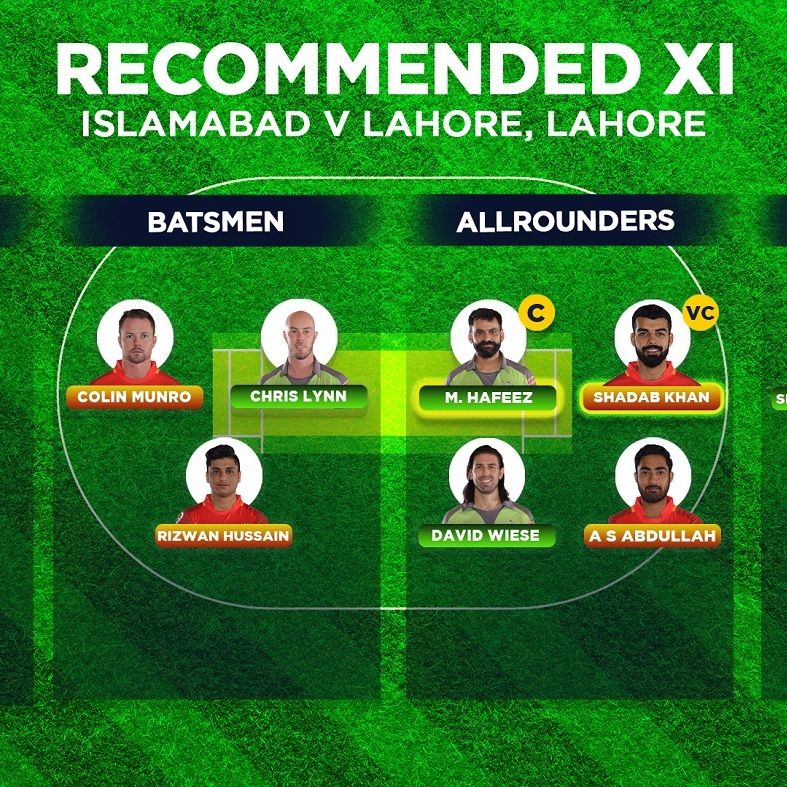 It feels like Hafeez’s 98 not out came so many matches ago, but it was just a week-and-a-half back. Incidentally, it came against the same opponents, so expect him to go well against the same bowling attack again. He can pick up a wicket or two too.

Khan has been in terrific form with the bat in the tournament even though he is primarily a bowler. His average at No. 4 and No. 5 this season is 72.5, the most among all who have played in those positions in PSL 2020. He has also picked up three wickets in the last three games.

Luke Ronchi: Prior to the Lahore v Quetta Gladiators game on Tuesday, the veteran from New Zealand was the highest run-getter in the tournament with 194 runs at a strike rate of 156.45. And don’t forget the dismissals behind the stumps.

Dale Steyn: Steyn started off his PSL campaign with a maiden but went for some runs later. But we are backing the experienced pacer to deliver against Lahore on a slightly better pitch for the bowlers. In his last five T20s, Steyn has picked up six wickets at an economy of 8.00.

Shaheen Afridi: Afridi has picked up the most number of wickets for a Pakistani at the Gadaffi Stadium since 2019 in all T20s – seven in four games at a strike rate of 13.7 and an economy rate of 5.06.

Rizwan Hussain: Hussain looked in ominous form during his cameo of 22 off 14 balls against Karachi Kings in his first game of PSL 2020. He has an impressive average of 33.15 in the format to go with his healthy strike rate of 132.20.

Ahmed Safi Abdullah: The 22-year-old left-arm spinner has been doing wonderfully without getting much credit. He has played three games in the tournament so far and has picked up four wickets at a strike rate of 12 and an economy rate of 8.12.