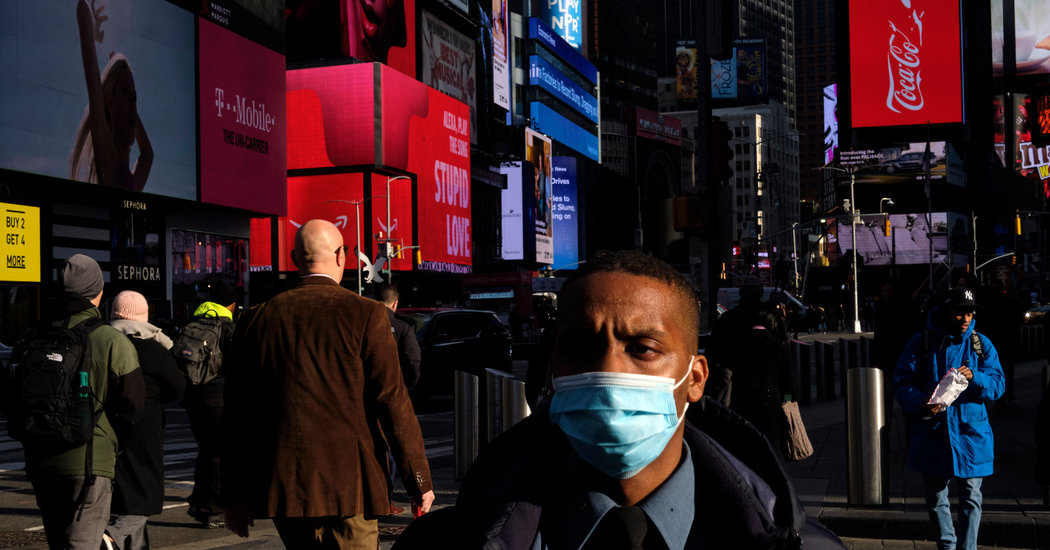 New York officials warned on Monday that the coronavirus was likely to spread in New York City, a day after confirming that a Manhattan woman had contracted the virus while traveling in Iran and was now isolated in her home.

“Community spread is going to be real,” Gov. Andrew M. Cuomo said at a news conference, alongside Mayor Bill de Blasio. “That is inevitable.”

The patient, the city’s first confirmed case, is not in serious condition, the governor added.

She returned from Iran on Tuesday with her husband and was tested after going to Mount Sinai Hospital in Manhattan on Saturday with mild respiratory symptoms; she has been staying at home, Mr. Cuomo said, and it was assumed that her husband was also infected.

The governor and mayor both pleaded for residents to remain calm, noting that the disease, which emerged in China in December and has recently spread to every continent except Antarctica, produces only mild symptoms in many people. Early estimates of the death rate had been around 2 percent, although that number could fall. On average, the seasonal flu strain kills about 0.1 percent of people who become infected.

Still, the news that the coronavirus had landed in Manhattan was sure to raise the level of anxiety across this dense city, where people spend their days in close quarters.

By rush hour on Monday morning, every cough or sneeze on the subway sounded a little louder and closer than it did last week. A few people wore surgical masks; one woman held the end of a paisley scarf to her mouth and nose.

Appearing on “CBS This Morning” on Monday, Mr. Cuomo said the city’s first patient was a 39-year-old health care worker, so “she knew to take precautions and stay in a controlled situation.” He added that she had not used public transportation since returning to New York.

The governor said health officials did not believe the woman was contagious when she was flying from Iran to New York, nor when she took a private car home from the airport.

“But out of an abundance of caution, we’ll be contacting people who were on the flight with her from Iran to New York and the driver for that car service,” Mr. Cuomo said, though he did not have the specific details of which flight she took.

Mr. Cuomo also said the state would institute new cleaning protocols in crowded public places, including schools and busses. “If it smells like bleach when you get on a bus or when a child goes to school, it is not bad cologne,” he said. “It is bleach.”

He said that the public health system was focused on reducing the spread of the virus, but suggested that eliminating it in New York was likely to prove impossible in the short term.

For weeks, the city has been bracing for the virus’s arrival, as it spread across much of the world.

By this weekend, several stores in the city had run out of sanitary supplies such as hand sanitizer, masks and antibacterial wipes. Some people had tried three or four stores in search of hand sanitizer, before admitting defeat. Boxes of surgical masks that sold last month for $20 were going for $75 at one grocery store in Chinatown in Manhattan.

At Costco in Brooklyn, people were stocking up on bottled water, Clorox wipes, cold medicine and cans of food, anxious for the days and weeks ahead.

Emily Kunstler, 41, arrived at the store before it opened on Monday and was shocked to find long lines at the door.

“I assume the news will only get worse before it gets better,” she said. She filled her cart with cans of tuna and canisters of sanitary wipes. She said the teeming scene in the parking lot was more unnerving than the prospect of the virus itself. “I’m not worried about sickness,” she said, “as much as about chaos.”

At least 103 people in the United States have been confirmed through laboratory testing to have the coronavirus. Many had been passengers on a cruise ship ravaged by the virus or had been infected in China and then returned to the United States.

But there have also been several confirmed cases of person-to-person spread in the United States. And researchers say that in Washington State, the virus may have been spreading for weeks, largely undetected, and that hundreds of people may have been infected. As of Monday afternoon, six people had died in Washington after falling ill with the coronavirus.

The new virus, officially known as Covid-19, is believed to have originated in the Chinese city of Wuhan late last year before spreading to more than 50 other countries. More than 86,000 people have been infected, and more than 2,800 have died. New hubs of transmission have emerged in Italy, South Korea and Iran.

Iran, the epicenter of the outbreak in the Middle East, has confirmed at least 987 cases, state news media reported. At least seven Iranian officials have been infected, including a Health Ministry deputy who was leading the coronavirus response.

Over the last month, there have been obstacles to widespread testing that may have limited the ability of the authorities to detect cases. Until this weekend, New York State health authorities could not test patients locally and had to send samples to the Centers for Disease Control and Prevention. Because of the C.D.C.’s narrow criteria on who was eligible for testing, the number of people tested was quite limited.

But testing procedures changed over the weekend, when the state’s public health laboratory in Albany, Wadsworth Center, began administering coronavirus tests after receiving permission from the federal government.

In addition to faster turnaround, New York’s health authorities now have more control over who is tested, which could lead to far wider testing than has occurred so far.

Mr. Cuomo said on Monday that he hoped to soon be able to test 1,000 samples a day.

Mr. de Blasio said that testing in the city would begin Monday, as the city’s health commissioner, Oxiris Barbot, announced a joint effort with the city’s public health system and two private hospitals to create an “early detection system” and ramp up testing.

The mayor also encouraged people worried they might have the virus to contact 311 or to go to a public health facility for testing.

He said the city has 1,200 hospital beds ready, if necessary. There are also likely to be cases like the health care worker’s, in which people not sick enough for a hospital can quarantine themselves.

At 88 Palace, a restaurant in Chinatown, the regular customers — many in their 50s, 60s and 70s — were noticeably absent on Monday.

“Now that New York has its first confirmed case, many elderly people are staying home,” Angel Chen, 40, a manager, said in Cantonese. She added, “Their children are telling them to stay home.”

She expects business to continue to suffer. “No one can predict what will happen, but we’re scared.”

At Grand Central Terminal, Robert Modica, 82, who lives in Midtown Manhattan, was passing through to grab a pastry on Monday morning. He said that he knew he was more vulnerable if he contracted coronavirus because of his age, but that it was too early for him to panic.

“We’ve had one case so far in the city,” Mr. Modica said. “There will be enough time if things get bad for me to overreact. I have lived a good life. I don’t have anything to fear if there’s another life.”