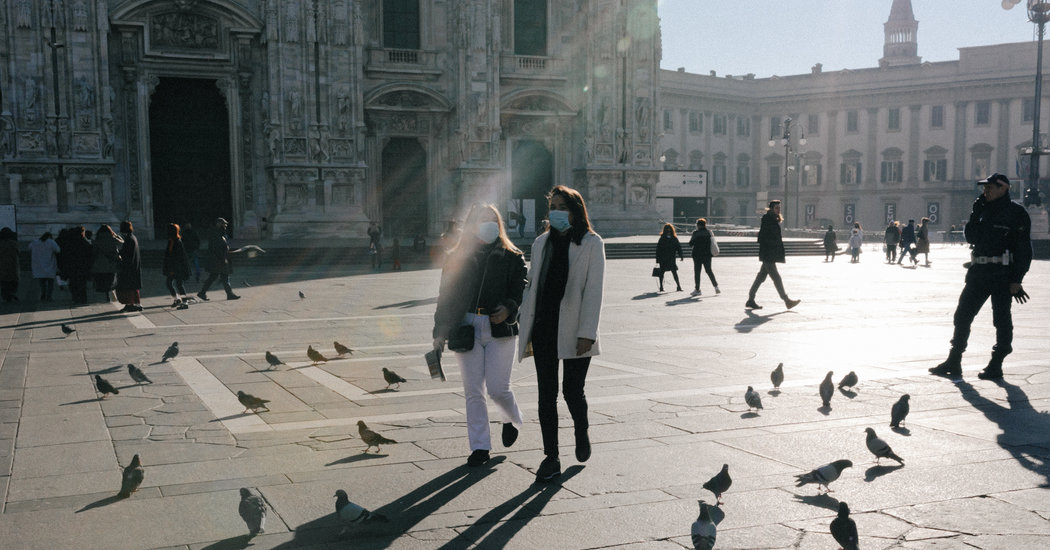 Some residents whose villages are under lockdown feel that they’re being sacrificed for the greater good, just as some countries around the world are trying to protect themselves from Italy.

And in Milan, Lombardy’s capital, some Catholics are questioning whether the cancellation of Mass, a sacred ritual of Italian life, is worth the spiritual cost.

“I’m not an epidemiologist,” said the founder of a Catholic group close to Pope Francis, “but do we really find ourselves faced with such a great risk that we renounce our common religious life?”

What’s happening: There are more than 87,000 coronavirus cases in at least 60 countries, including the United States, where the virus has killed two people and may have been spreading undetected in some communities for weeks. New York City confirmed its first case on Sunday.

Catch up: Here are the latest updates on the virus, and maps of where it has spread.

Another angle: China’s authoritarian government is rolling out mandatory smartphone software that dictates whether a person should be quarantined. But a Times analysis found that the system appears to share information with the police — a new template for automated social control that could persist long after the epidemic subsides.

All our coverage: Sign up here for our daily coronavirus newsletter.

Turkey declared war on the Syrian government for the first time over the weekend, a steep escalation of its involvement in a nine-year war and a retaliation for recent Syrian and Russian air and artillery strikes that killed at least 36 Turkish soldiers.

President Recep Tayyip Erdogan said he was opening Turkey’s border for migrants from Syria and other countries to enter Europe. That is part of his effort to cajole the European Union into supporting his military efforts in northern Syria, where a Russian and Syrian offensive has displaced at least a million people.

Responses: Moscow warned that it could not guarantee the safety of Turkish aircraft over Syria, and Greece deployed military forces to the Turkish border and said that it would suspend asylum applications for a month.

What’s next: Greece’s emergency measures are violations of European Union law, but the country said it would request special dispensation. The bloc plans to hold an emergency meeting this week to discuss the crisis.

After more than 20 people, mostly Muslim, were killed last week in religiously driven bloodletting that gripped the Indian capital, Prime Minister Narendra Modi broke days of silence to urge his “sisters and brothers of Delhi to maintain peace.”

But critics say Mr. Modi, who first ran for prime minister as an economic reformer, has made that peace hard to deliver. They argue that his policies, including a new law that excludes Muslims from a special path to Indian citizenship, have slowly created a Hindu-nationalist ecosystem that fans religious hatred.

The bloodshed may invigorate Mr. Modi’s Hindu nationalist base. Could protests at home, or a backlash abroad, prompt him to change direction?

Democratic primaries: Joe Biden’s victory in the South Carolina primary over the weekend has re-energized his campaign, just as 14 states prepare to hold primaries tomorrow. But Senator Bernie Sanders, the most liberal Democratic front-runner since the 1970s, still leads a shrinking field of candidates.

Afghanistan: The 18-year war entered a new phase over the weekend, as the United States signed a deal with the Taliban that laid out a timeline for the withdrawal of American troops. We have a profile of Zalmay Khalilzad, the Afghan-born American envoy who orchestrated the deal, and a primer on how the war became invisible to the U.S. public.

Slovakia: The defeat of Slovakia’s governing center-left party in an election over the weekend paves the way for a new government coalition, as populists appeal to an aggrieved sense of nationalism. The opposition party that won the most votes had campaigned on promises to fight corruption and promote the rule of law.

Snapshot: Above, voters take pictures with a poster of Prime Minister Benjamin Netanyahu of Israel. He faces Benny Gantz, the former Israeli Army chief, in a general election today, the country’s third in a year. Here’s an overview of what’s at stake, pictures from the campaign trail and a deeper look at Israel’s policy challenges.

Ben Smith: In his debut as our new media columnist, the former BuzzFeed editor in chief writes that The Times’s recent rise from “wounded giant to reigning colossus” is crowding out what’s left of its competition.

What we’re reading: This investigation by the digital editor of Wired’s British edition. Peter Robins, an editor in our London newsroom, says it “maps a labyrinth of stealth hotels and fake reviews, with implications for anyone who uses Airbnb, or who needs a rental apartment to live in a much-visited city.”

Cook: Vegan mapo tofu. “Mushrooms have a lot of umami, the savory taste that also makes Parmesan, soy sauce and red meat taste satisfying,” writes our Food reporter Julia Moskin, in the Five Weeknight Dishes newsletter. “Along with fermented black beans, they’re the key to this version of the Sichuan standard, and I love this video of a skilled home cook cooking the classic.”

Watch: “There Is No Evil,” a drama by the Iranian director Mohammad Rasoulof, about people who carry out executions in the Islamic Republic, has won the top prize at the Berlin Film Festival.

Read: Can’t make it to all the destinations we recommend in our 52 Places column? Read some books about them.

Smarter Living: When was the last time you read a car owner manual cover to cover? Probably never. But you should read this cheat sheet to personalize your car and enjoy it more.

Lessons from the 1918 pandemic

Last week, you might remember that we spoke with Donald G. McNeil Jr., The Times’s infectious disease reporter, about the coronavirus. This week, we’re circling back with his comments on “The Daily.”

Last week, President Trump tried to calm public fears by likening the coronavirus to the flu. But that comparison may not be a happy one.

“I spend a lot of time thinking about whether I’m being too alarmist or whether I’m being not alarmist enough,” Donald, a veteran science and health reporter for The Times, told the Daily podcast on Wednesday. “And this is alarmist, but I think right now it’s justified. This one reminds me of what I have read about the 1918 Spanish influenza.”

The 1918 flu was a very big deal. The U.S. Centers for Disease Control and Prevention estimates that about one-third of the world’s population became infected in 1918 and 1919, causing at least 50 million deaths worldwide. Early indicators are that the coronavirus mortality rate is similar to that of the 1918 flu — roughly 2 percent.

“You know, I take some comfort in the fact that 80 percent of the people have a mild disease,” he added, “and that might be me and everybody I love, too. We might all get lucky. But not everybody we know is going to get lucky if this turns into something like 1918.”

Thank you
To Mark Josephson and Eleanor Stanford for the break from the news.You can reach the team at briefing@nytimes.com.

P.S.
• We’re listening to “The Daily.” Our latest episode is about Joe Biden’s campaign.
• Here’s today’s Mini Crossword puzzle, and a clue: Hair for a hare (three letters). You can find all our puzzles here.
• The Book Review is welcoming Elisa Gabbert as its next poetry columnist.