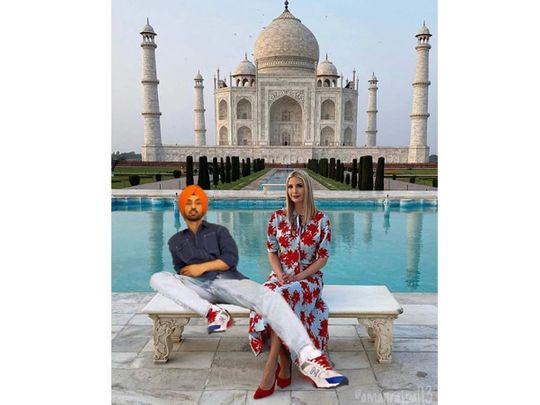 No one can accuse Punjabi pop idol and Bollywood star Diljit Dosanjh of not having a quirky sense of humour. The turban-sporting pop idol took a playful swipe at Ivanka Trump’s recent visit to the Taj Mahal in Agra.

In a hilarious exchange between two unlikely public figures, Dosanjh photoshopped his own image next to her touristy picture.

And the best part? Trump took it like a sport. In our opinion, a virtual world friendship seems to be blossoming.

“Me and Ivanka. Piche hee pey aaee, kehndi Taj Mahal kana, Taj Mahal jana… Mai fer ley geya hor ki karda [She was after my life to take her to Taj Mahal. So I took her, what else could I have done]?”

No sooner had the self-made flamboyant Dosanjh posted it on his Instagram account, Ivanka Trump, with a modest 6 million Insta followers, matched his witty post with: “Thank you for taking me to the spectacular Taj Mahal. It’s an experience I will never forget.” A winky smiley accompanied her post.

Dosanjh, who has 8.3 million followers on Instagram, garnered an avalanche of likes for his image. It got 640k likes and thousands of comments at the time of writing.

Dosanjh is one of Punjab’s most adored pop singers and he isn’t a shabby actor either. His role in ‘Udta Punjab’ with Shahid Kapoor and his recent blockbuster ‘Good Newwz’ with Akshay Kumar has made him a star to reckon with.