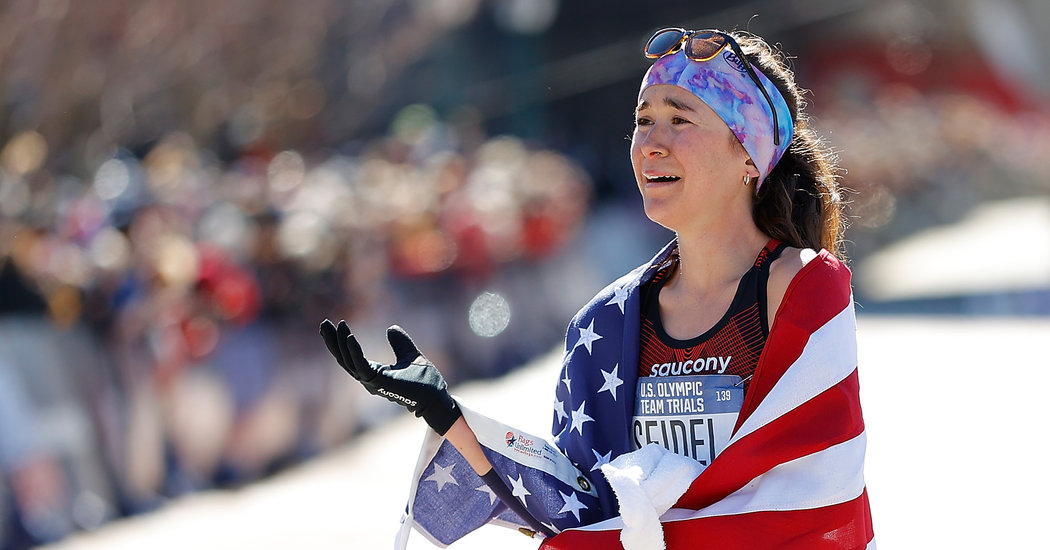 ATLANTA — Molly Seidel was ebullient when she qualified for the U.S. Olympic marathon trials.

She had been a standout athlete in college, but in recent years she had struggled with injuries. She’d started working at a coffee shop in Boston and babysat to make ends meet. She hoped for a good race at the trials in Atlanta on Saturday, but tried not to have big expectations.

It would be her first marathon, after all. She never could have predicted it would lead to the Olympics.

Seidel, 25, ran away with second place at the trials, finishing in 2 hours 27 minutes 31 seconds and securing one of three spots on the U.S. women’s team for the Tokyo Games this summer.

In the hours after her performance, she repeated the same thing a handful of times. “What is happening?” she said, looking upward, shaking her head, struggling to contain the smile stretched across her face.

The description “underdog” doesn’t do her story justice.

Seidel is known for her performances in 5,000- and 10,000-meter races. She won the Foot Locker Cross Country Championship in 2011 and has four N.C.A.A. titles. She qualified for the Olympic marathon trials with her time in the half marathon, a 1:10:27 in San Antonio in December.

The challenging course played to Seidel’s strengths. She called herself a racer, not someone who would thrive in a time trial. And she said the conditions — a hilly course on a chilly, windy day — played to her advantage.

In a race that included some of the biggest names in running — Jordan Hasay, Sara Hall, Molly Huddle, Emma Bates, Des Linden — Seidel flew under the radar until she broke away from the pack along with Aliphine Tuliamuk and Sally Kipyego in Mile 21. When she made the move, she said she knew she would “make the team or spectacularly go down in flames.” All three made the Olympic team, with Tuliamuk in first with a time of 2 hours 27 minutes and 23 seconds.

Here’s what makes her performance — and her ticket to the Olympics — so extraordinary.

She has two day jobs.

While Seidel spent the past two months training at altitude in Flagstaff, Ariz., her life in Boston has been rather ordinary compared to that of some of the competitors she faced on Saturday. She goes to work, shares an apartment with her younger sister and soaks up the gnarly weather conditions in Boston.

“I usually get up, do my main training session, come back, work a couple of hours at the coffee shop or go babysit, then can run later in the day,” she said. Then she laughed. “But things might be changing up a little bit when I get back to Boston.”

Seidel has been able to lie low at the coffee shop, and few customers and co-workers knew her status as an elite runner until recently. “I told them I qualified for the Olympic trials, and they were excited, but they’re also like, ‘You’re a nerd who runs.’”

She said her coach, Jon Green, did not like the two-jobs-while-training-at-an-elite-level thing. “I like the coffee gig,” Green said. But the babysitting? That requires too much driving and sitting in rush-hour traffic.

She gave her sister a high-five at Mile 7.

When’s the last time you saw a professional athlete swerve midcompetition to high-five a family member?

She thrived on a brutal course.

Seidel’s time, 2:27:31, was especially impressive given the course conditions.

One of Seidel’s favorite traditions is to wear a turkey costume at a turkey trot in her native Wisconsin.

“There’s nothing better than beating boys while dressed as a turkey,” she said.

In 2019, however, she ran the Manchester Road Race in Connecticut, a competitive race on Thanksgiving Day that is not conducive to cardboard and felt tails. She finished the 4.74-mile race in 24:43, tying Kipyego, her new fellow Olympian.

“When you’re heading out for the first mile in like 4 minutes and 50 seconds, you don’t want the turkey tail,” Seidel said.

Seidel has dealt with injuries and disordered eating.

Getting to the start line of the trials was a victory in itself. Seidel would not have believed it was possible just six months ago. “And if they told me, ‘You’re going to get second at the Olympic trials marathon,’ I’d be like, ‘OK, that’s funny.’”

Seidel has shared her struggles with disordered eating, and knew that recovery would not be easy. She told Runner’s World that she turned down sponsorship offers four years ago when she was not emotionally ready to turn professional despite her success at Notre Dame.

“Your long-term health is more important than running a fast 5K three months from now,” she said. “For people who are right in the middle of it, that’s the worst thing. It’s going to take a lot of time. I’m probably going to deal with it for the rest of my life. You have to treat it with the gravity that it demands.”

And when asked on Saturday about her injuries, her eyes grew wide. “If I have to list them, we’ll be here all day.” (It is a long list, including a stress fracture in her lower back.)

As she sat on the floor of a hotel hallway answering questions about her incredible day, her chiropractor stopped by to say goodbye. She leapt up. “Thank you for putting me back together,” she said, before asking him for one last hug as she stood in her race kit.

“You deserve all of this,” he said. “Every second.”