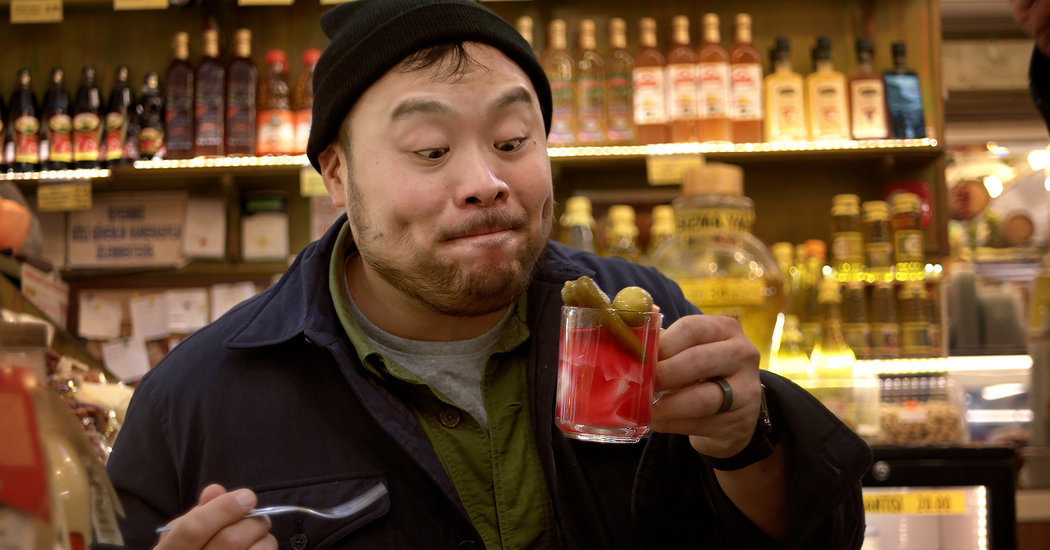 Despite opening to mixed reviews in 2008, Adam McKay’s raunchy buddy comedy has become a highly quotable cult favorite in the years since, pushing the man-child archetype of “The 40-Year-Old Virgin” and many other arrested development comedies to its absurdist limit. Will Ferrell and John C. Reilly star as middle-aged adults who still live at home with their parents — a situation that becomes especially awkward when those parents (Richard Jenkins and Mary Steenburgen) get married and move in together. At first, the two are petulant and violently at odds, but they soon discover they have everything in common.

In the spirt of Anthony Bourdain shows like “No Reservations” and “Parts Unknown,” David Chang’s “Ugly Delicious” is not merely a globe-trotting travelogue for foodies, but is about the cultural context that account for these culinary delights. The Momofuku chef and restaurateur has a sillier, sunnier personality than the late Bourdain, but they share an underlying respect and enthusiasm for the people they encounter. No details have been given yet about what to expect from the second season, but Chang’s method is to highlight a single food item or cooking style per episode — last season touched on pizza, tacos and home cooking, for example — and approach it from myriad angles.

The prolific Alex Gibney may have turned the journalistic exposé into documentary formula, but he’s helped draw attention to large-scale fraud with compelling docs about Enron (“Enron: The Smartest Guys in the Room”), Theranos (“The Inventor: Out of Blood in Silicon Valley”) and Scientology (“Going Clear: Scientology and the Prison of Belief”). The first season of Gibney’s “Dirty Money” offered more bite-size episodes on other white-collar crimes, like the Volkswagen emissions scandal and HSBC’s laundering of cartel money. The full slate of second season episodes haven’t been announced, but they will include an examination of Jared Kushner’s real estate empire.

The state of the cheer-ocracy is strong, thanks to the recent Netflix sensation “Cheer” and now this deliciously sinister series, which originally aired on the USA Network. Based on the book by Megan Abbott, who also serves as a co-showrunner with Gina Fattore, “Dare Me” delves into a hypercompetitive world of high-school cheerleading, focusing on the friendship between a college hopeful (Herizen Guardiola) and a squad leader (Marlo Kelly) with a nose for trouble. Their tenuous bond is upended by the arrival of a new coach (Willa Fitzgerald) who shakes up the team but gets embroiled in blackmail-friendly extracurriculars of her own.

‘Self Made: Inspired by the Life of Madam C.J. Walker’

Eulogized as the first female self-made millionaire when she died in 1919 — in actuality, the figure was more like $600,000, which was still extravagantly wealthy for the time — Sarah Breedlove, a.k.a. Madam C.J. Walker, made her fortune on a line of hair care and cosmetics for African-American women. In this four-part limited series, based on a biography by her great-great-granddaughter, A’Leila Bundles, Octavia Spencer stars as Walker, who naturally faced racial obstacles to the upper class, on top of hostile competitors in the field. The A-list cast includes Tiffany Haddish, Carmen Ejogo and Blair Underwood, and the pilot was directed by Kasi Lemmons, who recently made the biopic “Harriet.”

Joe Maldonado, better known as “Joe Exotic,” was long understood as an eccentric, a gun-toting polygamist and big-cat enthusiast who presided over an Oklahoma animal park and ran two unsuccessful campaigns for governor. Then he was sentenced to prison for 22 months for a murder-for-hire plot gone wrong. Maldonado was convicted of twice putting a hit out on Carole Baskin, a Florida animal sanctuary operator who had successfully sued him for $1 million for trademark infringement and other offenses. The documentary series “Tiger King” gets into the whole sordid affair, which gets stranger and more twisted the deeper it goes.

Though it bears more than a little in common with “Breaking Bad,” another series about a normal suburban family sucked into the drug business, “Ozark” has established a hick-noir seediness of its own, thanks to a Missouri lakeshore setting that’s filled with treacherous schemers. In the first season, Marty (Jason Bateman) and Wendy (Laura Linney) moved their family from Chicago to Osage Beach after Marty’s money-laundering operation for a Mexican cartel went awry. The two have since been squeezed by the cartel and by local criminals who don’t want them impeding on their territory. The new season picks up mid-conflict with the Kansas City mob.