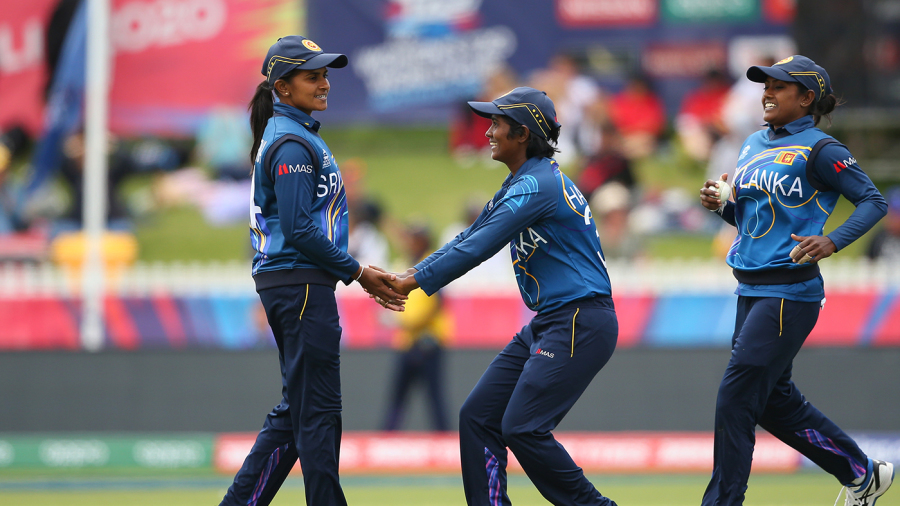 Shashikala Siriwardene held her own retirement party on her final day in international cricket taking a tournament-best 4 for 16 to help Sri Lanka to a consolation nine-wicket win over Bangladesh at the Junction Oval.

Bangladesh suffocated against Sri Lanka’s disciplined and skilful attack, which was led by the crafty off-spin of Siriwardene and the wily left-arm seam of Udeshika Prabodhani. The pair delivered 26 dot balls between them in eight overs, with Sirwardene picking up the spoils and Player of the Match honours. Kavisha Dilhari was equally as frugal while Achini Kulasuriya‘s extra pace picked up two wickets in the powerplay. Nigar Sultana played a lone hand for Bangladesh making a classy 39 as they struggled to 91 for 8 from their 20 overs having won the toss and chosen to bat.

Bangladesh failed to apply any pressure in the chase fluffing two straight-forward chances in the opening two overs. Both Chamari Atapattu and Hasini Perera made their most of their luck blasting a 51-run opening stand before Anushka Sanjeewani joined Perara to finish the job with 27 balls to spare.

Siriwardene sent off in style

Sirwardene received a retirement gift the day before the game from the India team in the form of a signed shirt. Bangladesh joined the Sri Lanka team in giving her a guard of honour as she walked onto an international ground for the final time. They then gifted her the second-best T20I figures of her career through a lack of intent and some odd shot choices with Murshida Khatun falling sweeping to an offspinner in the powerplay for the second successive match. Prabodhani continued her impressive tournament bowling with unwavering accuracy which allowed Siriwardene and Kulasuriya to attack from the other end. Kulasuriya’s extra pace and bounce picked up two wickets in the last over of the powerplay to leave Bangladesh reeling at 26 for 3. Prabodhani bowled her four overs straight with 0 for 13 including 12 dots. Her tournament economy rate was just 3.68 from four games.

Sultana held the innings together with an excellent 39. But it was a strange innings from her. At one stage she had faced 10 dot balls, including leaves and defensive shots to be just 6 off 16, before she unleashed two of the best inside-out lofted cover drives of the tournament. One came off Sugandika Kumari who was bowling left-arm orthodox from over the wicket, the other was from the offspin of Dilhari at the other end. But thereafter Bangladesh went a full 36 deliveries without finding the boundary. It was left to Sultana again in the 18th to club back-to-back boundaries down the ground using the pace of Kulasuriya. Siriwardene returned to pick up two more wickets in the 19th over and finish her career with 4 for 16. Sultana was unjustly run out off the last ball of the innings trying to selflessly run for a second while her captain Salma Khatun was oddly content with one.

Bangladesh’s only chance of winning the game was to remove Atapattu cheaply. They had their chance to get both openers in the first two overs, and like so many catches in this tournament, spilled them. Hasini Perera was dropped by Sultana off Salma Khatun in the opening over attempting a flashing cut shot. Such catches are never easy up to the stumps but it wasn’t a major deflection. Worse was yet to come. Two balls into the second over Atapattu gifted a simple head high chance to mid-off where Fargana Hoque watched it go into her hands and then out. Some of her team-mates slumped to their knees as the ball hit the turf. Perera and Atapattu struck four fours and a six in the next 14 balls to rub salt into the wounds. Atapattu struck a second massive six over long-off in the ninth over to bring up the fifty partnership as Sri Lanka looked on track for a 10-wicket win.

Sri Lanka’s only challenge came when Atapattu departed. Sultana made up for her earlier drop with a sharp piece of work to have the star opener stumped off Nahida Akter. Atapattu was beaten by a nicely flighted off-break and had no part of her heel grounded behind the popping crease as the keeper whipped the bails off. Akter became the youngest to take 50 T20I wickets in the women’s game surpassing Sophie Ecclestone’s day-old record. It left Sri Lanka still needing 40 from 60 balls with every remaining player in the line-up having scored less than 50 runs for the tournament, but Perera and Sanjeewani made light work of the challenge. Both found the boundary regularly with skilful sweeps and classical footwork. The cruised to victory in a risk-free fashion with more than four overs to spare.