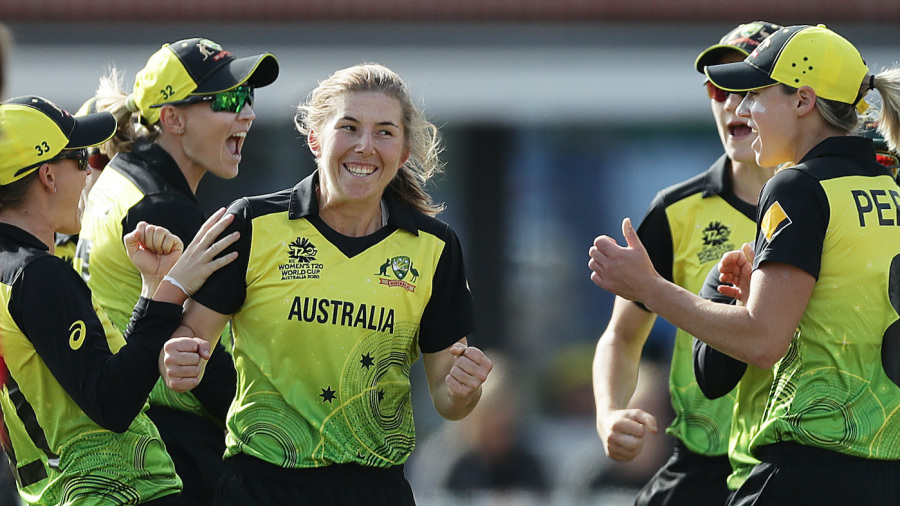 Australia suffered a grievous blow to their chances of lifting the T20 World Cup even as they survived a virtual elimination final against New Zealand, as Ellyse Perry limped from the Junction Oval with what appeared to be a serious hamstring injury.

With the semi-finals slated for Thursday in Sydney and the final at the MCG on Sunday, Perry has next to no time to recover, after already battling shoulder and hip complaints during the early part of the tournament. The worries around Perry detracted from what was otherwise a sturdy display to squeeze out New Zealand, as the hosts put together a sensible innings after being sent in by Sophie Devine, and then defended the target stoutly either side of Perry’s injury.

The pivotal spell was delivered by the wrist spinner Georgia Wareham, who defeated both Devine and Suzie Bates while also plucking out Maddy Green in a performance that suggested she may have been given a bowling berth earlier in the tournament. Wareham’s success also left the Australian selectors pondering whether, should Perry be replaced, they opt for more wrist spin in the squad, having already called in Molly Strano to replace Tayla Vlaeminck on tournament eve.

Australia’s captain Meg Lanning had indicated on match eve that her team enjoyed the chance to take stock after a hectic early schedule, and was endeavouring to bring a greater air of calmness to proceedings after they flirted with summary elimination in their first two matches. To that end, it was Lanning walking out as a traditional No. 3 at the fall of Alyssa Healy’s wicket – the first time it has been Lanning coming in at the fall of Healy instead of Ash Gardner in nearly two years of the pair rotating Nos. 3 and 4.

With Beth Mooney playing serenely at the other end, balancing power and poise, Lanning did not make a big score. But her positive and clear-headed 21 enabled the Australians to build steadily from the start and avoid the loss of early wickets, easing the task for the middle order to maintain and then increase the rate. If Lanning looked disgusted with herself to be out top edging a sweep at Anna Peterson, she had played a useful part in helping set the hosts on her way.

Mooney the spine, Perry the finish

The contrast between Lanning and Gardner was underlined when the No. 4 was tied in knots by Amelia Kerr and then bowled by Leigh Kasperek, having nevertheless played her part in a fruitful stand worth 52 in 43 balls with Mooney. As a top-order platform innings in a high pressure game with the occasional big hit, Mooney’s effort could scarcely be faulted, and it took a sublime catch by Bates, running around in front of the sight screen, to dismiss her.

In doubt before the match, Perry arrived at No. 5, her highest post for the tournament so far, and with Haynes belted the late innings runs that ensured Australia would pass 150 for the second fixture in a row. Together they ensured 41 runs were piled up from the final four overs of the innings, as both found the boundary and Haynes cleared it with one deft paddle over the head of fine leg. Kerr flighted the ball past Perry from the penultimate ball of the innings, but New Zealand’s target would require them to break a national chasing record.

On the slowing Junction Oval pitch, New Zealand could expect some of the biggest questions to be asked by spin bowlers, and Jess Jonassen did not disappoint by finding a way past Rachael Priest. However, at 39 for 1 after the Powerplay, New Zealand were actually a run better placed than Australia at the same stage, with their star duo Devine and Bates plotting a way forward on a sunny St Kilda afternoon.

Enter Wareham, who had not bowled a full four-over spell for the Australians since the tour of the West Indies in September last year and spent more time out of the team than in it. Her wrist spin is not always big on side spin but it is most certainly accurate, and by getting one on line to Bates and then reviewing the lbw decision, she claimed a vital break for her team. Unhappier tidings were to follow when Perry, fielding at mid-off and throwing off-balance, appeared to hurt her right hamstring, leaving the field in emotional turmoil as well as physical discomfort.

There was a brief moment’s shock for the Australians after Perry hobbled off and New Zealand looked to be loading up for a final charge to the semi-finals. But Lanning had the good sense not to persist with Gardner after her offspin went for 11 from one over, recalling Wareham to the attack and immediately reaping the rewards. Generating good dip and just enough turn, Wareham deceived Devine as she ran down the track, giving Healy plenty of time to complete the stumping.

In Wareham’s final over, Green flicked a full toss through square leg for the only boundary the leg spinner would concede, but then fell in similar fashion to Devine, stumped as she charged down to find the boundary but failed to reach the pitch of a leg break. Figures of 3 for 17 from four overs were a handsome reward for Wareham, and opened the question of whether Australia, as they closed things out with some aplomb, might need to consider more wrist spin into the team to replace Perry. They will also have to ponder the overs bowled by Gardner, who conceded 26 from two overs – these could easily have been far more damaging figures on another day.