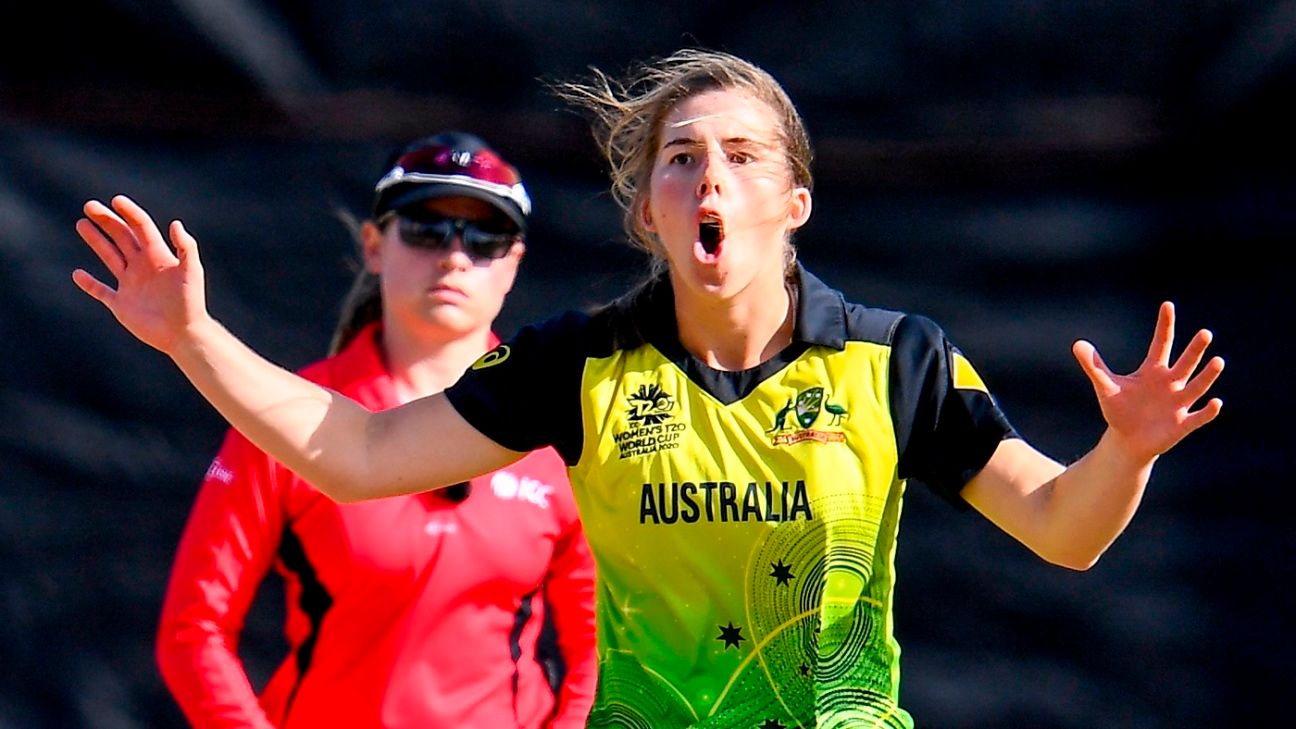 For most of this summer, Georgia Wareham could only have expected the most fringe-dwelling of T20 World Cup roles for Australia. After all, Ellyse Perry and Tayla Vlaeminck were set to blast opponents out with pace, Megan Schutt bewitching them with swing, and Jess Jonassen cleaning up whatever other resistance was left over.

This script was largely followed in Australia’s tournament lead-up, as Wareham played only twice against India and England and then in one unofficial warm-up against South Africa before the tournament began. In a further dampener of expectations, the loss of Vlaeminck to a foot fracture saw Molly Strano vault into the team for the opener against India: unlike her key role in the Caribbean, Wareham was looking squarely at a lot of drinks running.

Meg Lanning called the four-run win over New Zealand in the must-win final group game Australia’s best win of the tournament. The loss to India earlier in the script had put Australia in a spot, and they rode on Beth Mooney’s 60 Georgia Wareham’s three-for to get to the semi-finals after a tight finish in Melbourne.

“Today’s performance was our best of the tournament so far,” Lanning said. “I don’t think we could be better placed for the semi-finals. It’s certainly nice to have a win against a really good team and I thought it was a really good performance. We started well and were able to calm the situation down early with Beth Mooney playing a really good hand.

“We were under the pump with the ball a little bit but I think we dealt with it extremely well to get over the line against a really good New Zealand team. Our first challenge for this tournament to get out of the group stage and to have done that now is certainly a nice feeling.”

Two things happened to change things drastically. First, Australia lost to India, and then nearly coughed up another defeat to Sri Lanka that would have meant instant elimination. Second, the pitches turned out to be far more suitable to Wareham’s art, rewarding spin bowlers who bowl stump to stump while varying their speed and degree of spin, while depriving batters of pace to work with or create angles through the field.

If her first appearance against Bangladesh was not particularly memorable, Wareham produced her most incisive spell of the home season at the precise moment Australia needed it: even more so once Perry had limped out of the match and probably the Cup with a hamstring injury. At 20, Wareham has shown considerable evolution as a spin bowler even from the 2018 World Cup to now, and was too good for New Zealand’s key trio of Suzie Bates, Sophie Devine and Maddie Green as they contended with a steepling required run rate.

Asked how she had summoned up this display with so little consistent cricket behind her, Wareham said she had recalled her important contributions to both the 2018 World Cup and last year’s West Indies tour, when she plucked four wickets while conceding just 46 runs from 11 overs in three T20Is.

“It’s probably something I’ve looked back on and seen how I did things during that tournament and what worked for me,” Wareham said. “I think implementing those little things today helped out, and also I guess knowing that I can play that sort of role in the team because I did that in the last World Cup, it gives me a bit of confidence and it definitely helped out today.”

“I think spin’s played a massive role across T20 cricket for a long time now and when you are under the pump as batters and you’ve got to force the issue a bit, it is more difficult to do it against the slower pace”

Things started to turn for Wareham when she and wicketkeeper Alyssa Healy correctly deduced that Bates was lbw to a skidder after trying a pull shot. “I was confident it was out, but Midge [Healy] had a pretty good say and that usually helps,” Wareham said.

The captain Meg Lanning added: “We were talking about it maybe being too high. As soon as we felt that she hadn’t hit it, it was worth a gamble I guess and it paid off as well.”

Devine’s exit, well stumped off a legbreak outside the off stump just as the game was starting to tighten, was the result of a more concerted plan. “It’s probably something that’s been in the works for a little bit,” Wareham said. “Just planning around if I see the batter coming at me just chucking one wide, it worked out for me today, which was good, but it’s been tough going and it was finally good to get one.”

All this added up to the pivotal spell of the game, and perhaps also a blueprint for Australia to take forward into the semi-final and, if they get there, the final of the tournament they were widely expected to win. Lacking the pace of Vlaeminck and Perry, Lanning will likely need to call on Wareham, Jonassen and maybe even a third spin bowler – Sophie Molineux if fit, or someone like Amanda Wellington coming in from outside the squad – to deny opponents the chance to use pace onto the bat.

“As the tournament goes on I think the wickets are played on a lot more and they become a bit slower and lower, and pace off the ball makes it more difficult for the batters to create it,” Lanning said. “So that seemed to work for us today, and I guess it just depends on where you’re playing – the SCG we’re not really sure what we’re going to get, there’s been no games on there so far, so we’ll have to look at that. But I think spin’s played a massive role across T20 cricket for a long time now and when you are under the pump as batters and you’ve got to force the issue a bit, it is more difficult to do it against the slower pace.

“We’ve got 15 players here who can do a job and you need a squad to win a World Cup. You can’t rely on two players and the same XI each game, and we’re going to have to use the depth we have got, we’ve said we’ve got a lot of depth, I believe that, and we’re just going to have to use it. That’s just the reality of it, in elite sport you get injuries and things like that … I’ve got full confidence that any player who comes in can play a role and we’re just going to have to get through it and play maybe slightly differently, but that’s fine, we’ve got to adapt.”

Having finished second best to Wareham to ensure her side’s elimination, Devine admitted that it had been a different feeling losing to an Australian side relying so much more on spin than speed. “I think it is, and I think as well the pitch conditions certainly haven’t been what we expected when we first came over to Australia,” she said. “As soon as we knew the World Cup was here, we thought we’d get nice, fast, bouncy wickets and probably haven’t had those, although today’s wicket was a lot better, had a bit more carry and bounce in it.

“But spin has played a massive part throughout the tournament and it will continue to do so moving into the finals series. Certainly with Australia losing Tayla early in the competition, I know that was a massive blow fro them, but we also know their depth, spoken a lot about with the bat but certainly with the ball, the way Georgia Wareham stood up today was fantastic.

“Megan Schutt as well – geez, I hate her sometimes! – but they’re world-class players and I think that’s the great thing about Australia, I don’t like blowing them up too much because they’ve got big enough heads already, but it doesn’t matter who on the day, someone always seems to step up for them.”

From the moment they lost Vlaeminck, to the opening loss against India, the near-death experience against Sri Lanka and now the loss of Perry, Australia are becoming accustomed to doing things according to plans B and C. Wareham showed that, in her case at least, the back-ups are ready, willing, and most importantly able.