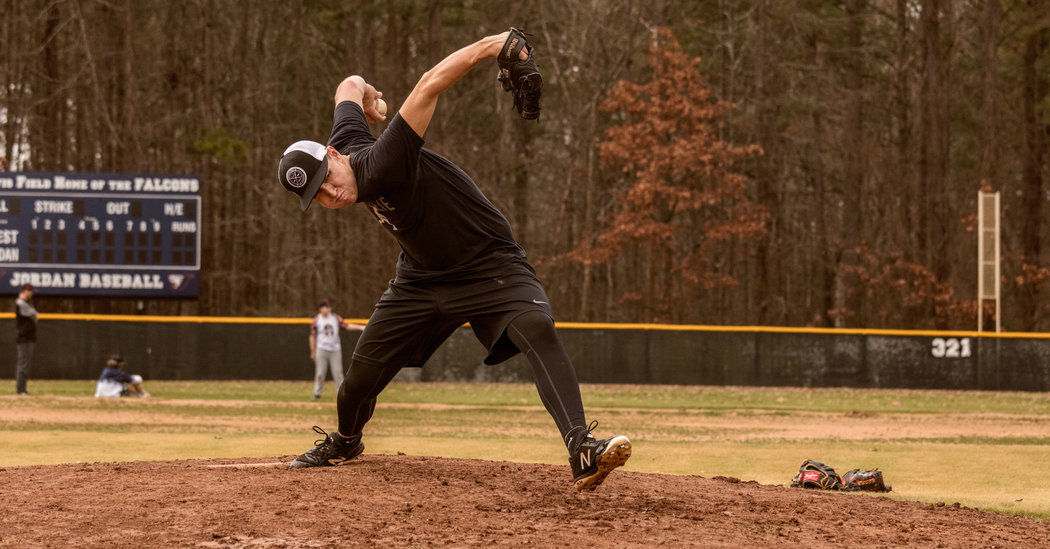 DURHAM, N.C. — Daniel Clark sat in a dugout, his head in his hands, recalling the lowest moments in his effort to recast his identity as a pitcher. Seven months had passed since he switched to throwing submarine style, and the transition had been more difficult than he anticipated.

“You remember the bad days more than the good days,” Clark, 20, said after describing an inning in which he walked three batters. “It’s hard to get over it.”

He was surrounded by people who understood — about two dozen pitchers who had come to a camp at Durham’s Jordan High School field in late December to refine their idiosyncratic craft. They were fellow sidearm and submarine pitchers, apostates in a sport that reveres the overhand throw.

Fewer than a dozen sidearm pitchers consistently worked in the majors last year, and only a handful who threw submarine style. The camp here in Durham was run by Sidearm Nation, a seven-year-old organization dedicated to improving those numbers. It strives not only to help unconventional pitchers develop a skill that is often dismissed, but also to let a group of misfits know they are not alone.

“People have less patience with us because it’s unknown,” said Ronnie Morales, a former submarine pitcher in the White Sox organization and an instructor at the camp. “We’re like the field-goal kickers of baseball,” Morales, 35, added. “We go over to the side and work on our stuff. No one wants to play catch with us.”

Though there have been stalwart sidearm and submarine pitchers — mostly relievers such as Dan Quisenberry, Kent Tekulve, Mike Myers, Brad Ziegler, Ted Abernathy, Gene Garber and, in the current crop, the tireless Joe Smith of the Houston Astros — players tend to be discouraged from throwing that way because coaches believe that it is less effective than overhand pitching and that it increases the risk of injuries.

Tekulve — who retired in 1989 as baseball’s career leader in relief appearances, with 1,050 — said all but two of his minor league coaches had told him that he would not make it to the big leagues throwing submarine style. Like most pitchers of his ilk, Tekulve wasn’t able to throw harder than 90 m.p.h. Scouts look for speed, he said, discounting the bewildering effect of a ball coming at the batter from an unusual direction.

“It took me a long time to get people to believe that I was even worth keeping around,” Tekulve said in a phone interview, adding, “You have to be a little bit nuts to do this in the first place.”

Some of the campers in Durham — including Clark, who pitched for a junior college last fall — lowered their arm angles because they weren’t able to throw overhand with sufficient velocity or accuracy to get to the next level of the game. Others had shoulder injuries and switched because they found that an unorthodox delivery put less stress on their arm.

Most of the camp’s pitchers, ranging in age from 12 to 20, had never met another sidearm pitcher and had never received formal training in the craft. They taught themselves by watching Instagram and YouTube videos, trying to mimic their favorite pitchers.

“It’s a dying breed,” Morales said. “There really is nowhere else to go when it comes to sidearm questions.”

That’s why Geoff Freeborn, the head baseball coach at the University of Calgary and a scout for the Baltimore Orioles, started Sidearm Nation as an online forum. It became a place for the iconoclasts to connect, share tips and read interviews with their brethren who had made it big.

Freeborn, 39, began hosting camps three years later, typically doing four a year in different parts of the United States and Canada. Each lasts two full days and costs $290; for the Durham camp, players came from as far away as Arizona and Massachusetts. Some of their parents watched from the stands, filming and taking notes.

Freeborn switched to sidearm pitching — or “dropped down,” as players describe rejecting the overhand norm — during his first season in an independent professional league after his manager told him that he would be cut if he didn’t make a change. Freeborn was able to play four more seasons.

“It made baseball fun again and gave me a second life,” he said.

Sidearm and submarine pitchers tend to be specialists, typically entering a game to face only one or two batters, and almost always to focus on batters with a dominant side that matches their own. They seldom overpower an opponent, relying more on how much they can make the ball sink — an ability that makes them especially valuable when there’s a runner on first and the manager seeks a reliever likely to induce a ground-ball double play.

“We are just ultimately trying to mess up the hitter’s timing,” Freeborn said, “and really, the big advantage is the deception you have with that arm angle.”

Batters also have a hard time preparing to face them, especially since it is so rare to face a pitcher who has dropped down.

Mets infielder J.D. Davis said that the angle of a pitching machine could be set up to try to replicate the delivery of a sidearm pitcher, but that the machine could not match the way the ball will sink.

Batters usually keeps their eyes on a pitcher’s chest or shoulders as the ball is being released, Davis and some of his fellow Mets explained, but they must lower their focus to the knees or waist if they want to track the ball properly against a sidearm or submarine hurler.

“They’re just weird,” Davis said at the Mets’ spring training facility in Port St. Lucie, Fla. “They are hard to pick up. They look like they are coming at you, then they go sideways.”

As for the presumptions of injury risk, Raffaele Escamilla, a professor of physical therapy at Sacramento State University who has done studies comparing overhand and sidearm pitching, said all pitchers were vulnerable. A sidearm thrower may have a greater risk of labrum injuries, he said, but less risk of rotator cuff problems.

It may become increasingly difficult to drop down successfully, because in recent years batters have been taking more pronounced uppercut swings that allow them to better drive sinking pitches. But much like throwing a knuckleball, another freakish style that is often a last-ditch attempt to carve out a career, dropping down will surely remain an option for the rare characters who can master the skill.

Things are about to get tougher for these specialists, though. This season, in an effort to speed up games, M.L.B. will require relievers to face at least three batters before they are removed. Managers will surely think twice about calling on an offbeat pitcher to escape a jam, because the reliever cannot be promptly pulled from the game when a theoretically ideal matchup yields, say, a line drive into the gap instead of the desired double play.

The Sidearm Nation protégés at the Durham camp didn’t have to worry about that, but at least one of them was still devising a plan that might keep him in games longer: Ashton Sturgell, a Georgia College right-hander, worked on throwing lefty.

“It was a group of people who finally understood,” Hejka said in a phone interview. “It was just like wow, this is awesome that there are other people out there like me who throw like this.”