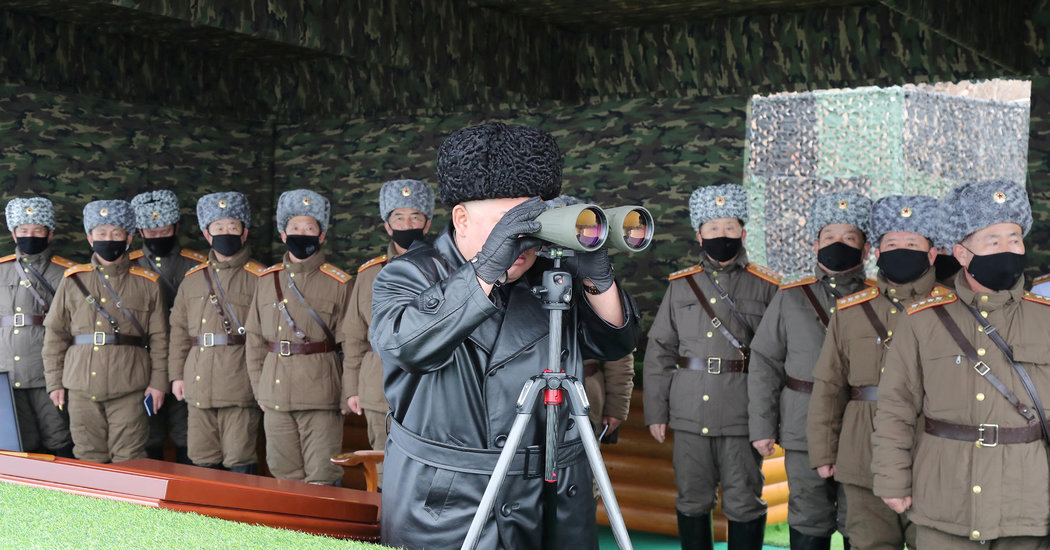 SEOUL, South Korea — North Korea launched two unidentified projectiles off its east coast on Monday, the South Korean military said, in what could be the country’s first weapons test since Nov. 28.

The projectiles were launched near Wonsan, a port town east of Pyongyang, the capital city, South Korean military officials said.

In its previous weapons test in November, North Korea launched two rockets from its east coast, firings that were overseen by the country’s leader, Kim Jong-un. South Korea later said the two short-range projectiles were fired from what North Korea called a “super-large multiple rocket launcher,” a new weapon the North had developed to target South Korean and United States military bases farther from North Korea’s border with the South.

But North Korea had been refraining from any weapons tests since Mr. Kim told a meeting at the end of December that he had all but abandoned hopes for diplomacy with Washington and ordered his country to brace for a prolonged standoff with the United States and endure sanctions. In that meeting, Mr. Kim also said his country no longer felt bound by its self-imposed moratorium on testing nuclear weapons and long-range ballistic missiles and that the world would witness a new strategic weapon “in the near future.”

Mr. Kim has also been keeping himself largely from public view as he locked his country down to prevent the spread of the coronavirus outbreak from neighboring China. On Friday, he appeared to resume his public activities, inspecting a joint strike drill of units of the North Korean People’s Army, according to the state-run media.

Also on Friday, North Korea said that Mr. Kim had fired one of his closest aides for corruption during a meeting of the Political Bureau of his Workers’ Party. The meeting focused on “enforcing top-class anti-epidemic measures to contain the viral epidemic spreading rapidly across the world,” although the North itself has not reported any cases of the new coronavirus.

During the meeting, Mr. Kim excoriated “abuse of power, practices of privileges, indulgence in bureaucracy, corruption and irregularities” among senior officials of the party’s Central Committee and at the party’s cadre-training center.

Then, the rubber-stamp Political Bureau dismissed Ri Man-gon and Pak Thae-dok from the posts of vice-chairmen of the Central Committee, it said.

Mr. Ri was one of the most prominent North Korean officials to fall out of Mr. Kim’s favor in recent years. As vice chairman of the Central Committee, Mr. Ri has helped Mr. Kim in matters of “organization and guidance,” monitoring the loyalty of the party elites and helping Mr. Kim decide whom to promote or demote. Mr. Ri has also led the party’s powerful Department of Organization and Guidance, which does the same work.

The North’s latest launch, the first in three months, came at a time when South Korea was grappling with an explosive outbreak of the coronavirus. South Korea reported 476 new cases of the virus on Monday morning, bringing the total number of patients to 4,212, making its outbreak the largest outside of China.