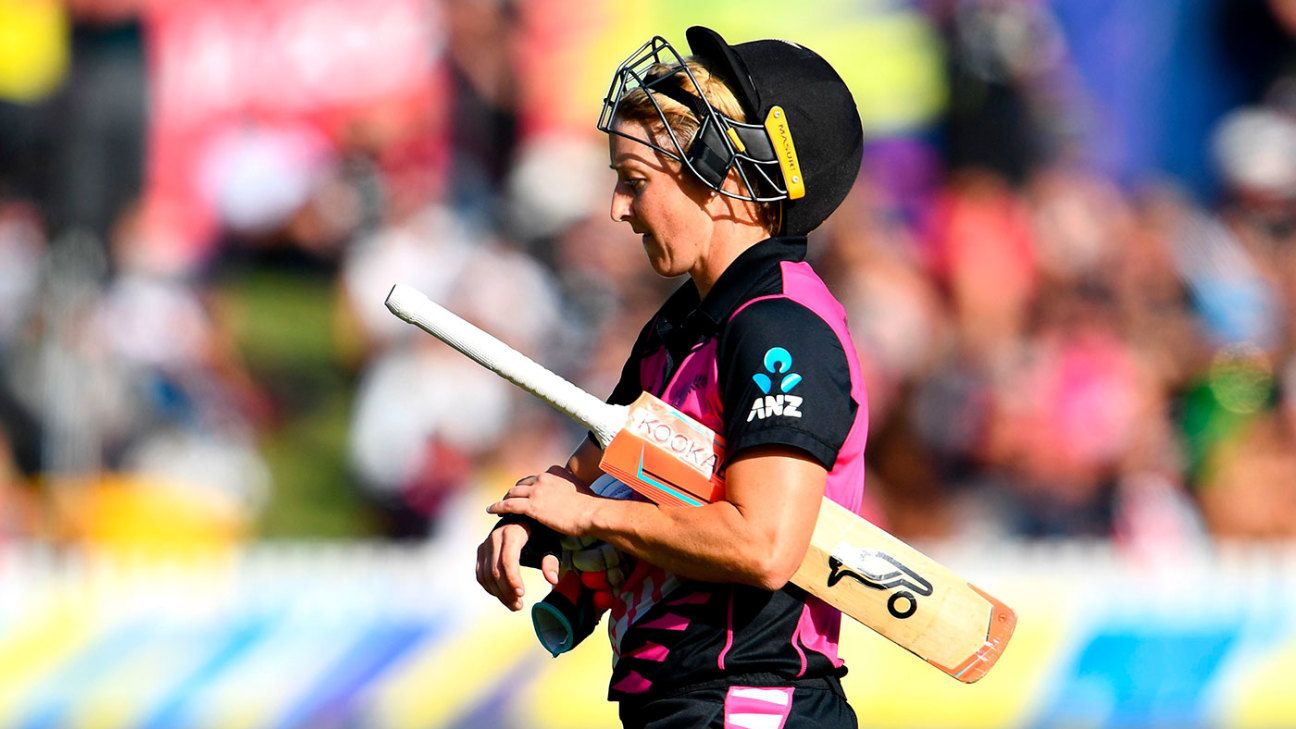 World Cups have become an albatross around New Zealand women’s neck. For a third straight time, under three different captains and two coaches, have they now failed to make the knockouts of world tournaments. The most recent of those came down to a four-run defeat against hosts Australia at Melbourne that dashed their hopes of reaching the last four of the T20 World Cup.

After exiting in the league stage at the 2017 ODI World Cup in the UK under former captain Suzie Bates, and the T20 equivalent the following year in the Caribbean under Amy Satterthwaite, a change in captaincy in light of Satterthwaite’s pregnancy break led to senior allrounder Sophie Devine taking over the role in mid-January.

An overhaul in the coaching staff, meanwhile, lead to Bob Carter replacing Haidee Tiffen as head coach, the latter stepping down from the tour of Australia in 2019 following a review into New Zealand’s disappointing 2018 T20 World Cup, before she decided against reapplying for her position.

With Carter’s contract running up to the 2021 ODI World Cup home in February-March, and Devine taking up the captaincy, New Zealand had hoped a restructuring in the domestic set-up – considered long overdue before the NZC finally carried it out in August last year – could help them turn their fortunes around in world tournaments. That, however, was not to be as a three-run defeat to India last week and Monday’s loss in Melbourne against their Trans-Tasman rivals shoved them into the bottom three in Group A, with India and Australia proceeding to the knockouts.

“We took them within five or six runs. It shows that we are not far but we have got to do things maybe slightly differently in New Zealand because we don’t have the same amount of depth, resources”

“I think skill-wise we are there; everyone knows we are a really talented side and we’ve got the depth,” Devine said when asked to assess their inability to qualify for semi-finals. “We’ve seen today that despite me not firing, Suzie and Rachel [Priest] not firing, we came really close to chasing down a strong Australian side.

“Whether it’s a mindset, whether it’s a mental thing, whether it’s game awareness, whether it’s just experience of playing in those pressure situations. We haven’t played too much international cricket together in the last 12 months, whether that’s something, but when we get back home, we’ll certainly go through everything and nitpick at it because it is a crappy feeling to miss out again. It’s really raw. But we certainly want to keep pushing and showing that we deserve to be there.”

In the lead-up to the tournament, a 0-3 defeat to South Africa at home in the ICC Women’s Championship ODI series marked the start of Devine’s tenure as captain, although New Zealand produced an emphatic turnaround in the five-match T20I series that followed, winning 3-1 with the last game abandoned.

Heading into the World Cup, the environment around the squad, Devine underlined, had been “positive”, with the coaching staff – including Carter, Jacob Oram (bowling coach), and Rob Nicol (spin bowling coach) – focused on helping the players to convert potential into performance.

In addition, a wider pool of contracted players and a significant pay hike for centrally contracted New Zealand women assured by the Women’s Master Agreement, which was reached in principle by NZC and the New Zealand Cricket Players Association (NZCPA) last August, inspired hopes of a more promising performance at the T20 World Cup in Australia.

“There was a big overhaul and it wasn’t just the top group at the White Ferns [New Zealand women]; it was the domestic stuff as well in New Zealand cricket,” Devine said. “And we have also seen in women’s cricket globally, it is coming up by leaps and bounds and we’re no different. To get Bob involved has been huge. [But] we’ve only played two series in that time with him at the helm. We still certainly are trying to figure each other out a little bit, me and Bob. But I think there have been really positive signs there.

“As I said, we were actually really close. The India game and now here [against Australia]; we were really close to [beating] sides with a lot more money, a lot more resources, a lot more player depth, and we took them within five or six runs. It shows that we are not far but we have got to do things maybe slightly differently in New Zealand because we don’t have the same amount of depth, resources; but we certainly have things in our favour and that’s what we keep working with.”

With Satterthwaite expected to return to the side ahead of the ODI World Cup, for which New Zealand have gained automatic qualification by dint of being hosts, the team management must decide whether to persist with Devine or hand the captaincy back to Satterthwaite. Devine, whom Jacob Oram described as an “attacking captain”, though, is game for more.

“Yes, certainly,” Devine said when asked if she would be keen on continuing in the role. “That’s another discussion that needs to be had when Amy returns and what it all looks like. At least for me, I have always been an aggressive player, and I sort of continue that with my captaincy. We’ve had a great role model in Brendon McCullum a couple of years ago, who always took the game on, and I don’t want to be any different with this bunch of female athletes.

“We do want to be really attacking and aggressive and how we go about things – whether it be putting things under the lid or bouncing people out – whatever it might be. We’ve always talked about stepping forward rather than stepping back and that’s certainly what I am going to do with my leadership.”