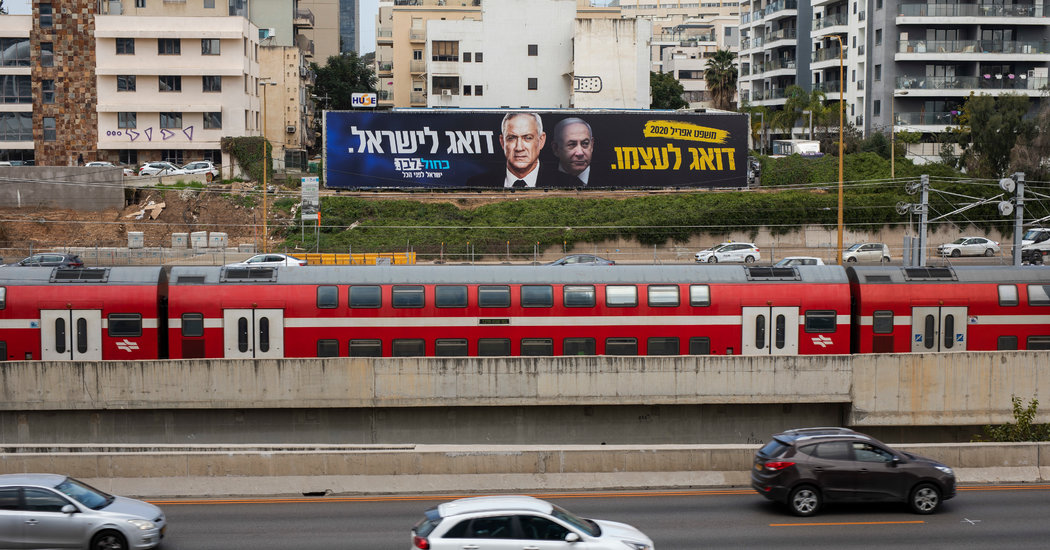 JERUSALEM — Shame. Disgust. And not a little despair.

Heading to the polls for a third time in less than a year is bringing out strong emotions in Israeli voters.

“Everybody is laughing at us,” said Ange Galula, 72, shaking his head the other day over an espresso at a Jerusalem cafe.

A French-Tunisian who immigrated to Israel five years ago from the Paris suburbs, he expressed astonishment that Israelis, who he said were ordinarily gifted at problem solving, seemed incapable of or unwilling to fix their political system.

“It’s the third election, and we’re preparing for the fourth, and yet nobody thinks it’s maybe necessary to define new rules,” Mr. Galula said.

The run-up to Monday’s parliamentary election feels as if nearly everyone involved — candidates, campaigns, voters, the political media — is staggering through the motions like the undead, doomed to repeat the process without cease.

A good portion of the voting-age public seems to have some disturbing thoughts on the brain: Is this election more “Groundhog Day” or an episode of the “Twilight Zone”? A Sartre novel, or a Beckett play?

Twice last year, in ballots in April and then in September, Israels tried to decide whether accusations of corruption against Mr. Netanyahu, their longest-serving premier, were serious enough to run him out of office. A new centrist ticket, Benny Gantz’s Blue and White party, fought Mr. Netanyahu’s Likud party to a draw each time.

But neither man was able to form a governing coalition in Israel’s crazy-quilt multiparty system.

The difference this time is that Mr. Netanyahu has now been indicted on charges of bribery, fraud and breach of trust. So Mr. Gantz, a former army chief and the champion of the just-not-Netanyahu forces, gets another crack at thanking the longtime incumbent for his service and sending him on his way.

Mr. Gantz, however, has been campaigning almost taciturnly, as if all he needs to say is “Netanyahu” and “indictment” to win support. And news of an investigation into a company he briefly ran complicated his squeaky-clean sales pitch — though he is not suspected of wrongdoing.

Polls now show the two men’s parties roughly even, and the vagaries of Israeli coalition politics suggest it is again unlikely that either will be able to assemble a majority government.

“There’s a feeling of desperation,” said Miri Paperni, 45, an accountant getting her nails done in Rehovot in honor of her niece’s wedding.

“We live in a twisted reality, where our leaders don’t do their job,” Ms. Paperni said, picking up steam as she thought aloud. “They don’t care at all that the country is falling apart, that there are no budgets for anything, that nothing really is functioning properly. It feels like we are slipping down a slope and not realizing that this is happening to us. People are living their daily life, but they’re in a free-fall.”

“It’s like the Middle Ages,” she added, “when the church kept the population ignorant so no one would ever wise up and rise up against it.”

Rena Ben Saadon, the owner of the salon, was doing Ms. Paperni’s nails. She said she had voted in April and September, but was considering sitting this one out.

Each Israeli election is a day off for those who want it, at great cost to the Israeli economy as a whole, though the parks are expected to be full of happy picnickers.

But Ms. Ben Saadon said there was a limit to how many days of her own income she could sacrifice to a political system that was not holding up its end of the bargain.

“I see how we’ll end up in a fourth election,” she said, “and this makes me feel like I live in a country that has no father or mother. I’ve never felt this way before.”

“It’s like we’re in a game,” she continued, “and the citizens are being used. We’re little pieces being moved around in a game. We’re being played by the powerful forces, and they don’t even see us.”

So many voters are battling these feelings of alienation that Izhar Carmon, an activist who leads the nonpartisan Social Justice Center, has made it a special pre-election focus.

“We’ve even given it a name,” he said. “It’s ‘acquired political helplessness.’”

Borrowing from the psychology of trauma, Mr. Carmon said that Israelis, who have treasured their democracy, were grappling with the realization that no matter how they voted, the country would still be deadlocked.

“We go to work, pay our taxes, go to the army, and then, like a zombie, you head toward elections,” Mr. Carmon said. “You feel like you’re doing the right thing, but you have zero ability to really make a change with your vote. And that leads to a crisis.”

Not everyone is quite so despondent.

Noam Oren, 26, a philosophy student at Hebrew University in Jerusalem, said he remained hopeful that Mr. Gantz would defeat Mr. Netanyahu, though he admitted to “some wear and tear” to his optimism.

But he said he did not expect turnout on campus to diminish.

“Motivated is a big word,” he said, asked about people’s enthusiasm for voting this time. “They will do it.”

Spirits are comparatively high among Israel’s Arab minority, whose politicians want to improve on the 13 seats in Parliament that their combined slate, the Joint List, won in September.

Among Jewish candidates, however, only one appears to be putting in much of an effort: Mr. Netanyahu himself, who is campaigning like there is no tomorrow. After all, his very freedom may be at stake.

A trial date of March 17 has been set in his corruption cases. A strong showing could bolster his efforts to negotiate a plea bargain, at a minimum.

Still, Mr. Netanyahu has been forced to light a fire under his listless supporters. His Facebook page repeatedly shows him phoning individual voters and cajoling them to do right by him, or appealing for supporters to text him the numbers of people who are not planning to vote, so he can hector them himself.

It has gotten so bad that some are praying, fatalistically, for a decisive outcome of any kind.

Rotem Avraham, a social worker, said she would force herself to vote “even if I had no legs,” but added that there was “a tiny little voice in the back of my head that’s been telling me all along, ‘You’re getting worse — your country is slipping further and further down.’”

Ms. Avraham, 48, said she wanted budgets to get passed and money to flow to the neediest.

“After three elections, all I want is a decision, even if it’s not a decision I hope to see,” she said. “At least the wheels will turn.”