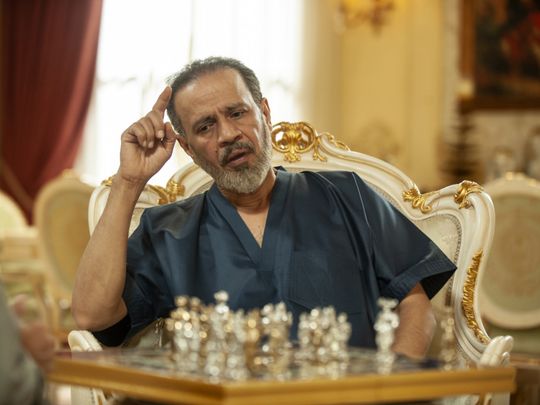 Many, many decades ago, soap operas started on the radio as ‘radio dramas’ sponsored by literal soap adverts.

But, what even distinguishes these dramas? Chiefly, subject matter — melodramatic domestic issues, including family, romance, and betrayal — as well as open-ended narratives that keep stories going for episodes, even entire seasons.

Showing daily from Sunday to Wednesday — and available on streaming service Shahid — the first season will be 250 episodes.

Much like the soap operas we’re used to, there are a lot of new faces on ‘Inheritance’ (‘Al Mirath’ in Arabic) that don’t belong to famous actors — but soap operas are notorious for being Hollywood launching pads: Brad Pitt, George Clooney and Demi Moore got their starts on soaps.

Could ‘Inheritance’ be a star factory? A successful TV experiment? The start of something new? Only time will tell.

But, in the meantime, we toured the sets of the lavishly designed TV series to give you a first person account of just how bizarre it is to navigate a real-life soap opera maze — plus, 11 things you need to know.

Bedrooms — so many bedrooms!

It always feels strange to tour the set of a TV show, because one second you think that you’re actually inside of someone’s home, and the next you walk out of the door into a sterile hallway and realise you’re in a sprawling soundstage.

The scope of ‘Inheritance’ in Abu Dhabi is massive.

But, it’s the first soap opera to come out of the Arab world, so you would expect nothing else.

At around 4pm on Wednesday evening, we make our way over from Dubai and the road is long, dusty and industrial. The studio, which belongs to twofour54, is hidden in a completely inconspicuous spot in Mussafah — so inconspicuous that our photographer drives right past it at first, telling me, ‘There’s no way this is the place — there’s nothing here.’

After a brief mingle on the red carpet, we begin our tour of the set — 90 per cent bedrooms, 9 per cent lavish living rooms, and 1 per cent eerie ‘jail cell’ with a grimy teddy bear propped up sideways on a barely padded metal bedframe.

The number of rooms is seriously impressive. At one point, it feels like we’re going around in an infinite loop, hurrying from one room to another to try and catch what the producer, Fatma Abu Assi, says next.

To be honest, without having seen the show, it’s difficult to match the stories she shares with us to the significance of the rooms we’re standing in.

But, this is what we take away from it: there’s going to be a lot of drama, a lot of conflict and a lot of contrasting personalities, from the nerdy hacker to the gentle ballerina.

Colour is abundant — from ornate blue and purple duvets, to tall, menacingly red candles that twinkle in front of a vanity mirror, and glimmering golden chandeliers that look too imposing to be real.

In case it isn’t obvious: there is nothing subtle about the décor of ‘Inheritance’. In fact, it’s grandiose and over-the-top — which is part and parcel for a soap opera. (I don’t think I’ve ever read the words ‘soap opera’ and ‘subtle’ in the same sentence before.)

There’s drama in the fluffed-up pillows stacked against hefty headboards, the spiral staircases leading to nowhere and everywhere, and the lone black piano that gives off a perfectly ominous sheen.

Set designer Adel Alouni confirms to me that it took them five months to build these sets, but admits that he didn’t rely too much on classical inspiration from Saudi Arabia.

Being human — and having furnished my own comparatively humble apartments in the past — I kept wondering how much it all cost. When I asked, Ali Jabber, the director of MBC Group Television, joked that the production budget for season one — which is still filming — is a “state secret” that he would never divulge.

So, even though the set of ‘Inheritance’ is a loud, bright and in-your-face affair, not leaving much to the imagination — the price tag behind it all will definitely keep us guessing.

WHAT YOU NEED TO KNOW

1. ‘Inheritance’, now airing on MBC1, runs from Sunday to Wednesday at 8pm UAE. Yes, that means four new episodes a week. If you miss the first showing of an episode, you can catch up on streaming service Shahid, where the episodes will become available to watch when and as they air.

2. The first season is a whopping 250 episodes. Each episode is just under one hour long, so if you ever try to binge the entire series without taking a break, it would take you approximately 10 days to finish it. Good thing you’ll have to wait for new episodes each week.

3. The story is about two feuding Saudi families. You’ll witness the tense dynamics that bind them and tear them apart. The show will also explore the “social, economic and cultural aspects” of Saudi Arabia.

4. Okay, so ‘Inheritance’ isn’t actually a tried-and-true soap opera. But, it’s the closest thing we have to one. According to Ali Jaber, director of MBC Group Television, ‘Inheritance’ is more of a ‘long-form TV series’.

5. By episode 50, they will decide whether or not to renew the show for a second season. “When I was studying in America,” said Jaber, “a very, very long time ago, there were shows I watched then, that are still running now. Remember ‘The Bold and the Beautiful’ [on air since 1987]? We have no excuse not to create shows like that.”

6. They will keep an eye out on social media responses to certain characters and plot lines. These can effectively alter the course of the series and character fates.

7. ‘Inheritance’ was filmed 90 per cent onset in Abu Dhabi, and 10 per cent in Saudi Arabia, for external shots. The series is a collaboration between MBC Group, Image Nation and twofour54, and it benefits from Abu Dhabi’s 30 per cent cashback rebate.

8. It took five months to build the sets. “We wanted to move outside of the typical mould of the classic ‘Saudi home’, and we wanted to bring in more colour, props, newer pieces, a slight European style, and the current design tendencies that you see,” said set designer Adel Alouni.

9. The cast is comprised of largely new and unknown actors, rather than celebrities. They were trained for more than four months. Director Abdullah Al Juneiby — one of four directors, alongside Tamer Bassiouni and international directors Christine Melek and Indra Bhose — said he is known for working with young actors and workshopping their talents.