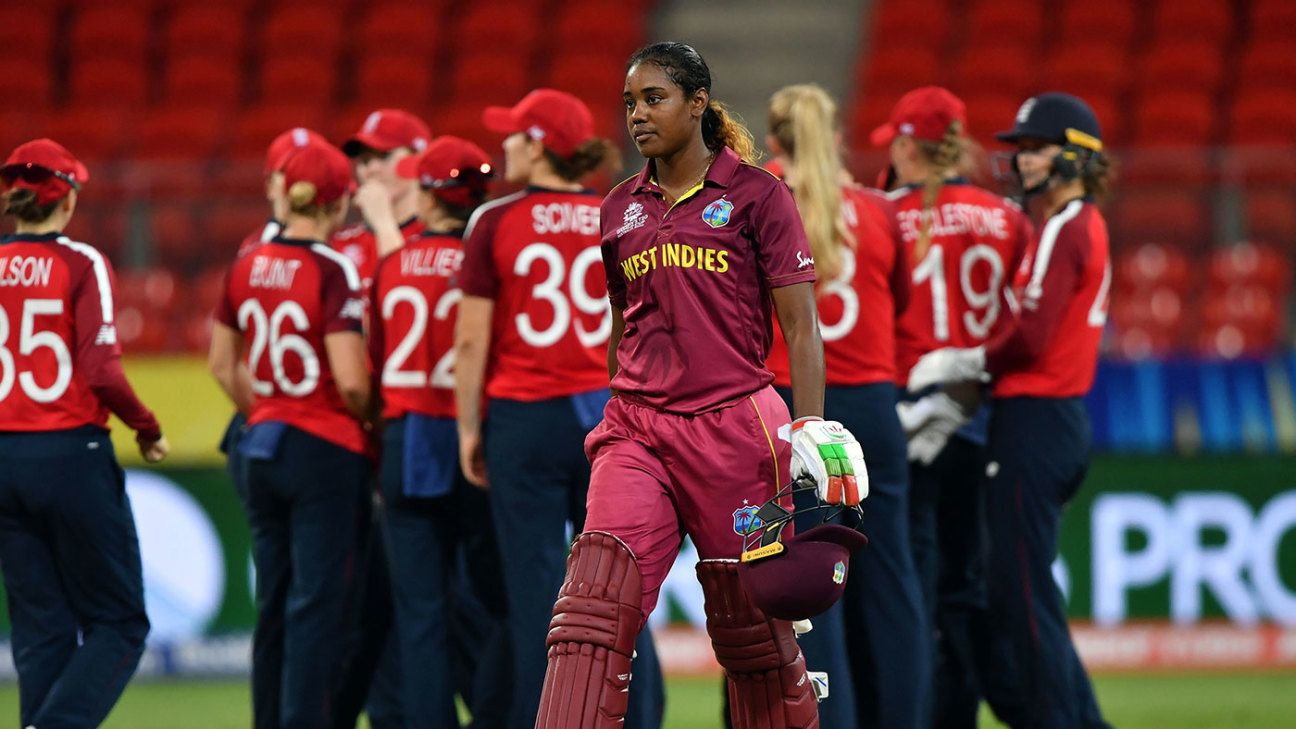 West Indies coach Gus Logie feels that a “fear factor” has been the reason for the team’s poor showing at the T20 World Cup after they were eliminated with a game to go following a heavy defeat against England.

Chasing 144, West Indies were skittled for 97, collapsing in a heap after Stafanie Taylor was stretchered off injured, having previously struggled in a small chase against Thailand and scrapped to 124 against Pakistan, which they couldn’t defend. It has been a far cry from the team that won in 2016 and reached the semi-finals in their home event in 2018.

“I think it went wrong from the start,” Logie said of the performances during the tournament. “It’s T20 cricket, you need show courage, you need to show composure. If you are timid you are not going produce the kind of scores you want to produce and we’ve seen that with our batting, it’s been pretty timid the whole series starting with the first game against Thailand when you have a score of 70-odd to get and it took 16 overs to get it.

“We haven’t been playing well for the last year or so, and I guess it just continued into this tournament. I think the only way is forward. I don’t think we can get any lower than this”

“That tells me, at the end of the day, while the players have some batting ability I think there’s a fear factor in the middle to play their natural game. It’s unfortunate that they wait until they get to the highest level of the game, in a World Cup, to show that lack of courage.”

Logie said that players struggled to translate the freedom they were able to play with at training into the pressure of match situations.

“Batting is an individual thing, you play as well as you can, you have to back yourself. Some of the balls these ladies are patting, you bowl those balls in the nets and they go way, way out of it. It’s not to say they can’t play the shots, I think it’s about believing in themselves under pressure.

“Over the years, we’ve always had good performances, but if you look at the scores they’ve always been about 120-130. We’ve had good bowling performances and defended it in the field. I don’t think we have scored 160s and 170s as regularly as we want to.”

Seam bowler Shakera Selman, one of a group of experienced players who overcame injury problems ahead of the tournament, conceded the World Cup had continued a dismal time for the team.

“We haven’t been playing well for the last year or so, and I guess it just continued into this tournament. I think the only way is forward. I don’t think we can get any lower than this,” she said. “Obviously we expected to get out of the group stage, although many people didn’t have us to qualify. We know what we’re capable of as a team, and I think our next series is so far ahead in June, hopefully we can actually perform the way we know we can.”

Logie defended the decision to bring Deandra Dottin back into the team after a serious shoulder injury, which made her consider quitting the game. Apart from a brief tournament in Trinidad before the World Cup, Dottin had not played for a year, and in three innings in the tournament has made just 12 runs while also struggling in the field and being unable to bowl.

“We tried to give her time to get it together but things happen so quickly,” Logie explained. “She was thrust back in the opening position in this game, but it didn’t work. The medical team cleared her to play cricket. She had a little tournament in Trinidad prior to coming here and did reasonably well, [but] the level of cricket is a bit below [this level]. We’ve been nursing her along and hoping, she hasn’t been bowling, but we felt she’s been batting pretty well.”

West Indies have one game left, against Pakistan, to try and salvage something from the tournament but they are struggling to find 11 fit players after the injury to Taylor alongside concerns over Britney Cooper, who twisted her ankle late in the chase against England, while Chinelle Henry is also doubtful.

“We’ve had a few setbacks on this tour to key players,” Logie said. “We are looking to put out an XI that will stay on the park.”