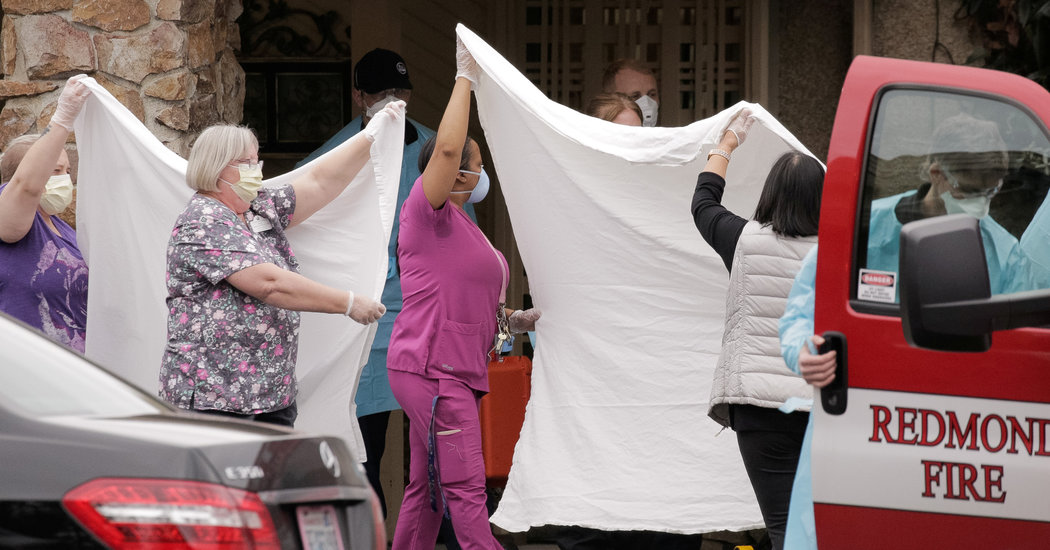 KIRKLAND, Wash. — Officials across Washington State were racing on Monday to assess risks for schools, medical centers, emergency workers and businesses after the deaths of two state residents who were found to have been infected with the coronavirus, and an unfolding outbreak inside a nursing facility.

More testing for the virus was expected across the region as the Seattle suburb of Kirkland became an epicenter of both illness and fear, much of it focused on the nursing facility, where six coronavirus cases have been confirmed and many more residents and employees have complained of illness. One of the two people who died in Washington State — the first fatalities from the outbreak in the United States —  had been a resident of the nursing home. Three more residents from the nursing home were in critical condition.

By Sunday, a quarter of Kirkland’s firefighters were in quarantine because they had been to the nursing facility. A nearby college spent the day cleansing its campus because students had visited the nursing home. The hospital has asked visitors to stay away.

Beyond Kirkland, the King County authorities announced two additional coronavirus cases earlier in the day that were unrelated to the nursing home; those patients were in critical condition at hospitals in Seattle and Renton.

The fear and confusion at the nursing facility and throughout the county presented a vivid and disturbing picture of how much uncertainty surrounds the virus and how many people have the potential to be affected.

Elsewhere in the country, the states of New York, Florida and Rhode Island each reported their first cases, all linked to recent foreign travel. Other states also reported new cases, bringing the national total by Monday to 90.

Globally, the number of confirmed cases climbed above 89,000, including the first cases reported in Scotland and the Dominican Republic and a new spike in Iran. More than 3,000 people have died, most in China.

The nursing facility in Kirkland, run by Life Care Centers of America, is full of elderly residents who can be especially vulnerable to respiratory illnesses. Records show that the center has a recent history of illness outbreaks and of difficulty following infection control precautions.

Relatives who had recently visited the facility said it had been coping with illness among residents and staff in recent days, and told all its residents on Friday to stay in their rooms. For a facility of communal living — with a shared dining facility, group movie nights and friends who visit with one another in the halls — that decision prompted concerns among residents and families.

But even more troubling news followed on Saturday: A resident and an employee had tested positive for the coronavirus. The facility later posted a statement on its website saying it had stopped allowing any visitors, including relatives and volunteers.

Bridget Parkhill said her 77-year-old mother is a resident who has been sick for several days, but has not been taken to the hospital because she does not have a fever or respiratory distress.

More than a month ago, Washington State reported the nation’s first confirmed case of the novel coronavirus. The state then went weeks without any more positive tests, but only a few dozen potential cases were tested in that period.

That has changed dramatically in recent days, after the Centers for Disease Control and Prevention expanded its testing criteria last week to include people with severe and unexplained respiratory illness, and not just people who were very ill and had been to China or in contact with another known patient.

The Food and Drug Administration announced on Saturday that it was giving laboratories and hospitals across the country the go-ahead to conduct tests, and on Sunday, Vice President Mike Pence said the federal government released 15,000 testing kits over the weekend, and was working with a “commercial provider” to distribute 50,000 more soon.

The expansion of testing swiftly turned up new cases. “What prompted us to start looking is a change in the testing criteria,” said Dr. Francis Riedo, an infectious diseases specialist at EvergreenHealth, a public hospital district in northern King County and southern Snohomish County.

Dr. Riedo said that the positive tests among hospital patients in Washington were “the tip of the iceberg” — the most severely ill patients were being tested, but many others with less severe illness could be out in the community with undetected infections.

Dr. Scott Lindquist, epidemiologist for communicable diseases with the Washington State Department of Health, said that he was aware of cases in which physicians suspected coronavirus and could not get the patients tested before the change in criteria, though he did not know how many such cases there had been. Dr. Lindquist said the state laboratory was rapidly ramping up to be able to perform 200 tests a day.

“We’re really aggressively sampling in Washington State now, because we feel like it has been here and we haven’t had the ability to lab test,” Dr. Lindquist said.

Dr. Delaney Ruston, a primary care physician in Seattle, said she had seen a patient last week with a low-grade fever who had been in China about three weeks earlier. She said public health officials told her the patient did not meet criteria for testing because the patient had been away from China for more than two weeks. Even so, Dr. Ruston wondered whether the patient, who wore a mask in the clinic to protect others and had no cough, could have had a mild case of the illness.

“All of us are in dire need for a point-of-care test,” she said, meaning a test that can be performed quickly on site, like those now in use for seasonal influenza.

Genetic researchers said on Sunday that they had found strong indications that the virus has been quietly spreading in the region through people who were not known to be infected. The researchers analyzed the genomes of the virus found in two people in Snohomish County tested about six weeks apart, and concluded that the cases were very likely linked, even though there seemed to be no way that either could have directly infected the other.

The two people were not known to have come in contact, and the second did not contract the virus until several weeks after the first — the initial case detected in the country — would probably no longer have been contagious. The researchers said that based on the time elapsed between the two cases and other factors, whatever chain of infection connected the two cases could have affected hundreds of other people as well.

The more recent of those two cases was not initially suspected to be coronavirus, and was detected through a nasal-swab sample collected to test the patient for influenza and shared with the Seattle Flu Study. The sample was also checked for other illnesses including coronavirus.

Dr. Lindquist said that of about 1,000 Seattle Flu Study swab samples — which were tested in the last week by the Brotman Baty Institute and the Northwest Genomics Center — only one had tested positive for coronavirus. “It’s not like it’s super prevalent,” Dr. Lindquist said.

It’s unclear when or how the coronavirus reached the Life Care nursing facility in Kirkland.

Kenny McMillan, 60, was receiving rehabilitative treatment at the center for a broken foot in February when he started to feel sick. He has long suffered from chronic obstructive pulmonary disease and the physical toll on his body from a lifetime of jobs mulching tree trunks and working in warehouses and assembly lines. So he was particularly vulnerable when he started feeling what he described as “flu symptoms — pneumonia symptoms” that became life-threatening about two weeks ago.

“All of a sudden one night, they came in and they couldn’t revive me, because I was out of it,” Mr. McMillan said. “If they hadn’t have revived me, I probably would’ve been gone. That’s the only reason I’m here.”

He said he was transferred to EvergreenHealth Medical Center in Kirkland and was moved in and out of the intensive-care unit as his oxygen levels and heart rate fluctuated. He said he was moved to an isolation room around when the news broke about two coronavirus cases at the nursing home, and was tested Saturday night for the virus; he was waiting for the results.

As he spoke, he coughed and had to pause to catch his breath. “Hold on, I’ve got to take a deep breath, slow it down a bit,” he said. “It’s been a nightmare.”

Fear and uncertainty quickly rippled outward through the networks of family members and friends of patients and staff at the nursing home. Mr. McMillan’s ex-wife had been there frequently to help care for him and had recently returned to fetch a plastic boot he needed for his broken right foot. She said she was now worried that she and her family could have been exposed. So, too, were friends she had visited over the past weeks, like Michelle Mackey, who said on Sunday that she felt all right but was unsure whether she should return to her grocery-store job on Monday.

“It’s crazy how this thing can be spread around and you don’t even know,” Ms. Mackey said. “I don’t know what to do.”

Ms. Parkhill’s sister, Carmen Gray, said her mother reported Sunday morning that people were now wearing masks and protective gear when they brought her meals, but she had still not been tested for coronavirus.

“Since she has been sick for days and been around all these people, I don’t understand why she’s not being tested, if for nothing else to rule her out,” Ms. Gray said.

The Life Care nursing facility has been cited over infection control issues in the past. In 2019, a state investigation found that Life Care had failed to ensure that its staff was aware of and followed “transmission-based precautions” as required by federal regulations. Investigators said a report issued by the facility in March 2019 showed that it had experienced two influenza outbreaks that sickened at least 17 residents and 7 employees.

Life Care said in response to the state report that it would teach its staff more about transmission precautions, controlling infections and hand hygiene. Two months later, the state wrote to the center to say that the errors had been corrected and that as of June 2019, it was compliant with all regulations.

Pat Herrick said her mother has been at Life Care in Kirkland for seven years. While it was not uncommon for a spreading flu to prompt the facility to take strict precautions, Ms. Herrick said, she was impressed with how Life Care leaders have handled the issues in the past, and appreciated their candor in handling the coronavirus.

Ms. Herrick said her mother has not been sick, but even so, she said she was concerned about what could happen if her mother catches the virus.

“The level of danger for her could be significant,” Ms. Herrick said. “She is 89 years old. It could take her.”