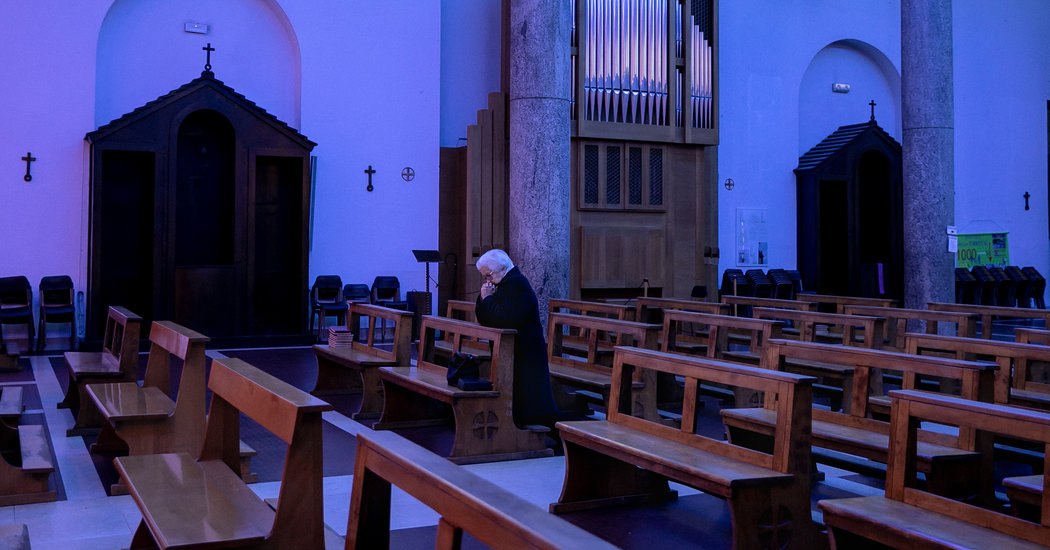 MILAN — The camera focused on a woman reading a prayer for people infected with the coronavirus, and for the doctors and nurses helping Italy deal with the largest outbreak in Europe.

“Lord, hear our prayer,” Julia Kranzelmayer, her husband and three children responded Sunday from the couch of their Milan living room as they followed the Mass on television.

In an effort to prevent the spread of the coronavirus, regional officials canceled the public celebration of Mass throughout much of northern Italy, and upended sacred rituals of Italian life.

Soccer players have held matches in empty stadiums. Milan’s vibrant aperitivo scene has slowed to a halt, and empty trams smell of disinfectant. Ms. Kranzelmayer’s employer, like many in Lombardy, has ordered its staff to work from home, and her children cannot return to school for at least another week.

The coronavirus has infected more than 1,500 people in Italy, with nearly 1,000 of the cases in the Lombardy region in the north, which includes Milan. At least 34 people, almost all elderly or with underlying conditions, have died. Tens of thousands of people in 11 towns are under quarantine in “red zones,” with their loved ones outside forced to drop off cigarettes and care packages for them with authorities, who then deliver the goods.

Amid all that disruption — the uptick in cases and enormous economic damage, including from the application of the United States’ most severe travel warning to Lombardy and Veneto — the loss of church gatherings has shaken a fundamental pillar for the faithful.

Pope Francis has sought in Rome to be close to the sick, even as he shows cold symptoms himself, and church leaders in the north are unhappy about being forced apart from their flocks.

“The difference between participating in the Mass in the church and watching it on TV is like the difference between sitting next to a bonfire that warms up, illuminates, brings joy, and watching a picture of the fire,” Milan’s archbishop, Mario Delpini, said on Sunday as he celebrated a nationally broadcast Mass without congregants inside the crypt of Milan’s empty cathedral.

He acknowledged that assembling could be “dangerous,” but said, “It is painful to celebrate without the people.”

Critics of the closings have argued that the salve of faith, and the clergy’s concrete help, has aided Italians through past epidemics. The Lombardy region’s patron saint, Charles Borromeo, is revered in part for his noble actions during a 1576-1578 plague, they point out.

Church leaders in the north have asked the regional authorities to let the faithful attend Mass. The Roman Catholic patriarch of Venice, Francesco Moraglia, said this week he would ask the regional government of Veneto, which has also closed churches and schools amid the outbreak, to allow the celebration of Mass, citing the assertions of early Christians that without communion, “we cannot live.”

Regional health officials argue that the restrictions are in place to keep people alive. According to the Italian National Institute of Health, one of its top officials, Silvio Brusaferro, has argued that historically, places of worship are where people have gotten infected most easily.

But frustration is spreading in the north, where many suggest that politicians and the media have overstated the virus’ threat.

“I’m not an epidemiologist, but do we really find ourselves faced with such a great risk that we renounce our common religious life?” Andrea Riccardi, the founder of the Community of Sant’Egidio, a Catholic group close to Pope Francis, wrote Saturday in the newspaper La Stampa. “Prudence helps, but maybe we have let ourselves be guided by the great protagonist of the time: ‘fear.’”

He complained that “not even in the time of the bombings” did the churches close. (A sign in the venerable Milan cocktail bar Jamaica expressed the same complaint.) He said that while supermarkets and subways remained open, “churches were treated the same as theaters” and shuttered.

Father Livio Fanzaga, the director of the Catholic radio station Radio Maria, attributed the spread of the virus to Satan and called the epidemic “a warning from the heavens” against materialism.

Around Milan, the faithful could visit churches only for private prayer, and could not sit together in large congregations.

Francesco Ferraro, a sacristan of the Santa Maria Annunciata in Chiesa Rossa church in Milan, said older people did not understand that they could not go to Mass, since even during World War II “they used to gather even more and pray together.” Giovanna Mazzola, 72, said she had watched three separate Masses on television but came to the church anyway, and was saddened to see people “sitting far away from one another because they are scared.”

“I went to say a little prayer,” Michele Lorenzi, 80, said after lighting a candle for his late parents and sick sisters. Only about 10 people were inside with him, and guards in masks patrolled the central naves and empty pews. “It’s very very sad.”

Pope Francis, in Rome, had sought to avoid such disruptions.

On Ash Wednesday, the opening of the Lenten season, he celebrated Mass in the fifth-century Basilica of Santa Sabina, and he also offered prayers last week at St. Peter’s Square.

“I want to again express my closeness to those suffering from the coronavirus and the health care workers who are treating them,” Francis said Wednesday after shaking hands with prelates and the faithful in the front rows of a crowd in which few people wore masks.

When Francis, who lost part of a lung from a respiratory illness in his youth, came down with a cold last week some media outlets drew a connection to the virus. (“Pope Francis sick a day after supporting coronavirus sufferers,” read a headline on Friday in The New York Post.) The Vatican spokesman, Matteo Bruni, said on Sunday, “There is no evidence to diagnose the pope with anything other than the cold.”

Delivering his Sunday blessing from an Apostolic Palace window far above the square, Francis suffered a couple of coughing fits. He announced that, for the first time in his seven-year papacy, he would cancel his participation in a weeklong spiritual retreat.

“Unfortunately, a cold prevents me from participating this year,” he said. “I will be following the meditation from here.”

While hardly any cases have been reported in the Rome area, the situation in the north is much more dramatic.

As the televised Mass began, Ms. Kranzelmayer, 46, called for her daughter to wash her hands and join the rest of the family on the couch. They watched a broadcast from a church in the eastern region of Abruzzo, where regular services were held.

“Surely it doesn’t seem normal that they can go to Mass and we cannot,” Ms. Kranzelmayer said. As her daughter Laura, 9, complained that her older sister had broken one of her toys and her mother-in-law prepared veal cutlets and risotto across the hall, the priest on television talked about not allowing the devil to lead them into “nonsense.”

Ms. Kranzelmayer’s husband, Vincenzo Aglialoro, 47, said that was easier said than done. When he took the family dog out for a walk, the conversation at the coffee bar had become all about “the protein of the coronavirus,” he said. “It’s become nonsense.”

At their home, as the family watched the camera zoom in on the priest raising the communion wafer, they rose and held hands. (Sofia, 15, stayed seated and murmured, “This is ridiculous.”) Minutes later, the screen suddenly went blank.

“They are cutting back to the studio,” Mr. Aglialoro said in disbelief.

Eventually, the connection was restored and the Mass finished. The children went to check on their grandmother, Annamaria Losio, 77, who was breading the cotoletta alla Milanese while she listened to the Mass in her own apartment.

She said that because of health problems she had turned in recent years to watching the Mass from home. She had to be extra careful now, she said.

Her television cut to Rome, where Pope Francis appeared at the window for his traditional Sunday blessing. Ms. Losio and her grandchildren watched silently as he lamented his cold and wished everyone a “Good Sunday and a good lunch.”

“Thanks, Pope,” Ms. Losio said, squeezing her grandchildren and turning back to the stove.