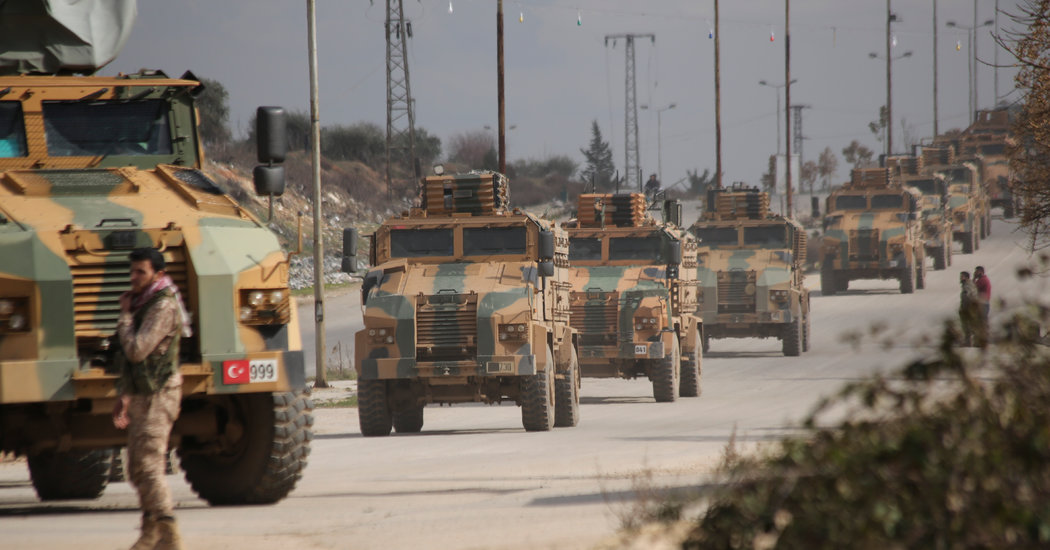 ISTANBUL — Turkey said on Sunday that it was launching a major counteroffensive against the Syrian government, for the first time openly declaring war on the government of Bashar al-Assad and steeply escalating Istanbul’s involvement in Syria’s nine-year war.

The announcement came three days after Turkey suffered its worst military losses in a single attack of the war, with at least 36 soldiers killed and more than 30 wounded in Syrian and Russian air and artillery strikes. Turkey’s president, Recep Tayyip Erdogan, vowed retaliation and demanded that Syrian troops withdraw beyond a previously agreed upon de-escalation boundary.

Turkey’s defense minister, Hulusi Akar, announced the counteroffensive on television in a statement distributed by the state-run Anadolu news agency, saying that the operation in northern Syria was intended to end the war and stop a Syrian government offensive that was displacing thousands of Syrians.

“All of our efforts are primarily to ensure a cease-fire, to prevent migration and to stop the flow of blood,” Mr. Akar said, “and thus to bring peace, peace and stability to the region as soon as possible.”

Although he said that the show of force was not aimed against Russia, which supports Mr. al-Assad’s government militarily, Mr. Akar also called on Russia to take responsibility for the assaults against Turkish forces.

“We don’t intend to confront Russia” he said. “Our only aim there is to stop the massacre by the regime.”

Mr. Akar added, “To speak frankly: We do not find acceptable such a statement from a guarantor country as, ‘We are not responsible for the regime attacks.’”

Mr. Erdogan will meet with President Vladimir V. Putin of Russia on Thursday in Moscow, Turkish officials said. On Sunday, Moscow warned that it could not guarantee the safety of Turkish aircraft over Syria.

Turkey’s escalation of force comes as President al-Assad’s forces are closing in on their goal of retaking Syria’s last rebel-held territory, Idlib Province. The offensive has driven nearly a million residents toward the border with Turkey and led to a landscape of desperation. Many are living in tents or sleeping out in the open in the freezing cold.

Turkey has deployed around 7,000 troops to Idlib in the last month to protect the forces it sent in under a de-escalation agreement made with Russia in 2018. The reinforcements are also intended to support Syrian rebel groups that have been rapidly losing ground against Mr. al-Assad’s forces.

Turkish troops have been engaged directly on the front lines, shooting down at least two Syrian government helicopters and spearheading a counterattack last week to retake the strategic town of Saraqib on the main highway between Aleppo and Damascus.

Since the attack on Thursday, Turkey has retaliated with strikes on Syrian government forces in and around Idlib and farther afield, including on a chemical weapons storage facility south of Aleppo and a government air defense system in Idlib, according to Turkish officials.

Sunday’s announcement appears to be a declaration of what was already underway for days, but also signals a sharp increase in the level of activity, Turkish analysts said.

Turkey has sought support from the United States and other NATO allies in its attempt to thwart the Syrian and Russia offensive in Idlib, but it appears to be conducting the operation alone.

Western officials have ruled out an engagement of NATO troops but have been helping Turkey in other ways, in particular with information. Jens Stoltenburg, the NATO secretary general, said after an emergency meeting Friday that NATO was providing airborne radar surveillance over Syria.

Turkey has asked the United States to provide Patriot missiles to help it against Russian and Syrian air power, but Washington is demanding that Turkey first make inoperable the Russian S-400 missile defense system that it acquired last year from Russia. President Trump said Saturday that a possible sale of Patriot missiles to Turkey was under discussion, Anadolu reported.

The turning point for Turkey may have been the strike last week on its soldiers in northern Syria, the death toll for which may have been substantially higher than disclosed, analysts said. The well-connected military analyst Metin Gurcan described it as “Turkey’s darkest night” in an article on the online outlet Al-Monitor.

He wrote that a Turkish mechanized infantry battalion of about 400 soldiers came under fire Thursday evening on the road between the towns of Balyoun and Al Bara south of Idlib city. Citing local sources, he said two Russian and two Syrian government planes had been active in the area that morning and returned to attack the Turkish convoy in a coordinated action.

The lighter Syrian planes hit the convoy first, bringing it to a halt, then the Russian planes pounded the stranded vehicles, forcing the soldiers to flee and take cover in nearby buildings. The Russian jets then unleashed laser-guided bunker-busting bombs that collapsed two buildings and buried Turkish soldiers under rubble.

More than 60 were wounded, and Mr. Gurcan said the death toll, reported as at least 36, was closer to 50 or 55. His numbers remain unconfirmed, but other analysts said they had heard that the bodies of up to 100 soldiers had been transported back to Turkey.

Russia has denied that its forces were involved in the strike, and says it stopped the Syrian attack when alerted by the Turks. The defense minister, Mr. Akar, says that the attack continued after Turkey contacted the Russians, and that even ambulances came under fire.

In the western city of Izmir, during the funeral for Ahmet Alpaslan, a corporal who was among the Turkish soldiers killed in Idlib, his brother sobbed as he stood next to Bekir Pakdemirli, the minister of Agriculture and Forestry.

“Let no one die anymore,” the brother urged. “Let soldiers not die. Do something. It’s enough.”

Emotions ran high throughout Turkey as funerals were held for soldiers over the weekend, and the Turkish government has mounted a concerted information war to handle popular anger over the strike. Drone footage of Turkish attacks on Syria was replayed repeatedly on television.

Turkish officials also announced the opening of its border to Europe, precipitating a mass movement of migrants toward the western borders.

On Sunday, state-run Turkish Radio and Television reported from Idlib that Turkish forces had shot down two Syrian Sukhoi jets and started intense rocket strikes on government positions south of the city of Idlib.

Syrian State TV confirmed attacks on two warplanes, and said both pilots had managed to land safely. Syrian social media chat rooms shared footage of the planes in flames plummeting from the sky.

Mr. Akar spent the night with his generals at a military command center in Hatay, on Turkey‘s border with Syria, and was shown in conference with servicemen.

“Our main goal is to ensure a permanent cease-fire and stability,” he said. “Within the scope of legitimate defense, our target will only be regime soldiers and their members attacking our troops.”

“It is our historical, humanitarian and conscientious responsibility to protect the right to life of our neighbor Syrian brothers,” he said.