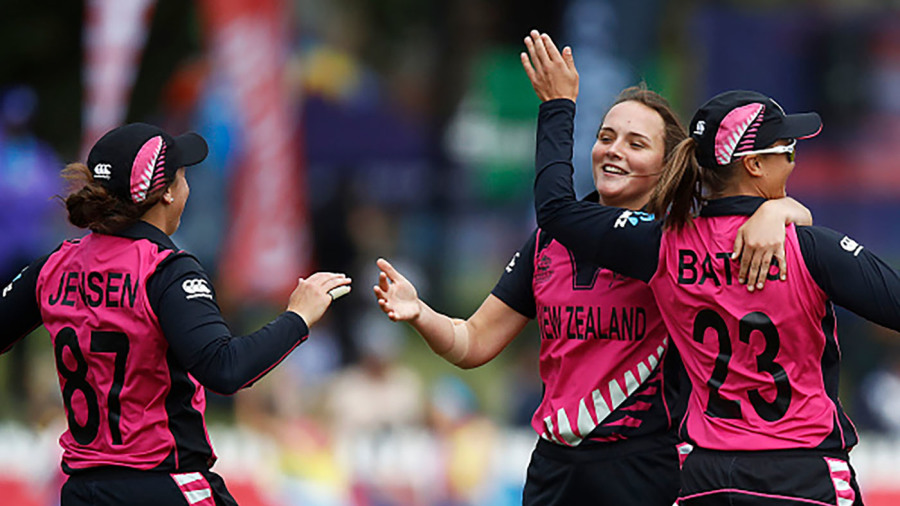 Barely months into her international career, New Zealand teen allrounder Amelia Kerr was billed as “a star of the future” by Australia captain Meg Lanning. On the eve of New Zealand’s virtual quarter-final clash against hosts Australia at the T20 World Cup, former New Zealand men’s allrounder Jacob Oram, who has been working with the women’s national team as bowling coach since 2018, described her as a “future captain”. The prediction from Oram came only days after Katey Martin, a senior team-mate, identified Kerr, who now has 60-plus international appearances, as a “once-in-a-generation type player for New Zealand”.

So swift has Kerr’s growth been as a legspin-bowling allrounder that, at just 19, and only into the fourth year of her career with New Zealand, Kerr is often mentioned in the same breath as the world’s best or the most experienced. And there’s evidence enough why she’s rated so highly by colleagues and opponents alike.

Kerr’s unbeaten 232, a record for the highest individual score in women’s ODIs, and a five-for in the same match against Ireland two years ago became testament to her appetite for all-round excellence – if against an error-prone side wanting in experience. Last week, in the penultimate over of New Zealand’s bungled chase against India at the T20 World Cup, her jaw-dropping onslaught against the highly regarded India wristspinner Poonam Yadav was further proof of her ability to soak up pressure.

“It was nice to prove I could play like that at the international level,” Kerr told ESPNcricinfo on the sidelines of a training session at the Albert Cricket Ground in Victoria, Melbourne. “It was nice to give us that chance to getting close to winning it, but it was obviously very disappointing to not be able to get the last ball away for a four and turn it into a Super Over.

“I looked at the field, and made sure I made my decision as early as I saw the ball leaving her hand as to whether I go backward or I come out of my crease. For me, it was about keeping it simple and not overthinking too much, and just having a couple of options, so I could make those decisions.”

Kerr, though, has been no stranger to pressure or handling with maturity the expectations that come with thriving in challenging situations. Much of it is down to her pedigree and the conditioning she’s had in the years preceding her New Zealand career. A native of Wellington’s northernmost suburb Tawa, Kerr, born to former Wellington cricketers Robbie and Jo, inherited her cricketing genes from maternal grandfather Bruce Murray, the former New Zealand Test cricketer.

Having grown up looking up to Kane Williamson and fellow Tawa native Sophie Devine, her precocity found early expression under coach Ivan Tissera as she ditched her dreams of becoming a “scary fast bowler” to realise her natural gift for being able to spin the bowl.

Barely a month past her 16th birthday, she would graduate from playing boys’ grade cricket in school to making her international debut, in a home ODI against Pakistan. By the time she turned 17, she had already played in an ODI World Cup and had become the youngest female cricketer to bag a central contract with New Zealand Cricket.

“She debuted later [in 2016], so she wasn’t in the side when I was with them,” Oram recalled of his previous coaching role with New Zealand women in 2015-16. “But I remember hearing about this Amelia Kerr and I knew her dad, Robbie [a former Wellington cricketer], and also played against him. So, I would hear about Amelia Kerr, you know, she’s this little guru.

“But since her debut, she hasn’t turned back … I see Amelia captaining within the next few years, maybe even before she is 25. Because she’s been playing since she was a teenager, she has a wealth of knowledge and experience to call upon, and because of the skill she has, she’s already earned the respect of her team-mates.

Oram, who’s been working closely on Kerr along with spin-bowling coach Rob Nicol, believes the teenager’s “batting at the moment is probably a level lower than her bowling, but she’s got the skills to be a genuine allrounder”.

“I know she got a double-hundred against Ireland in a one-dayer, but [she still has a long way to go] in terms of getting more consistent with those performances, especially against the top sides in the world,” Oram said. “It will come with age because batting seems to be more of an experience-gathering thing.

“But she’s an amazing talent and we’ve got to manage her well with everything she’s doing overseas – WBBL, and even with the IPL [Women’s T20 Challenge] thing. You let her do those things but you need to make sure she’s fit and firing for New Zealand as well because that’s the No. 1 priority.”

A sought-after name in domestic franchise leagues, Kerr, who plays for Wellington Blaze alongside her older sister and New Zealand quick Jess in the home domestic T20 Super Smash competition, has plied her trade across several countries. Her first taste of an overseas league came in the UK, where she represented the Southern Vipers at the 2018 Kia Super League, followed by a runners-up finish with the Mithali Raj-led Velocity in the Women’s T20 Challenge in May last year. Most recently, she enjoyed a memorable title-winning campaign with Brisbane Heat at the 2019-2020 WBBL in Australia.

“Playing overseas for Brisbane Heat and winning the title – that was pretty special,” Kerr said. “These leagues are awesome and it’s great development for the women’s game. It helps us learn to adapt to different conditions.

“The 13,000-odd crowd we had there [at the Women’s T20 Challenge final in Jaipur] as amazing as well. I love being put in such situations and put under pressure. That’s what you train and work hard for – to be put into those situations. Kind of every game I have played in overseas leagues has gone down to the wire, and these games are like international cricket: you share the dressing room with the world’s best, the training is top quality and you keep improving your skills so much.”

Among the other “most fulfilling learning experiences” in her career, Kerr counts the 2017 ODI World Cup, a confluence for many firsts for the then 16-year-old. “At that age, you’re definitely not in your full potential, so you end up learning a lot that can shape your perspective towards cricket and life,” said Kerr of the first of her three world tournaments across formats so far, one in which she became the youngest New Zealander to represent the country in a World Cup.

“That tournament did something similar to me,” she added. “For me, getting fitter was a big thing, watching how the consistency of my bowling, batting and athleticism in the field could be better, that was important. A part of it was already there, but I have worked on it and also on the power and just getting older and stronger has really helped me with my game. Also, learning to have access to different areas of the ground with different field-sets has been another important thing.”


For me, getting fitter was a big thing, watching how the consistency of my bowling, batting and athleticism in the field could be better, that was important

Aside from her growing understanding of street-smart batting, Oram said a stand-out feature in Kerr’s repertoire of all-round skills remains her potent wrong’un. “It is a huge, huge weapon,” said Oram, explaining how her pace through the air gives extra bite to her googly, compared to India’s Poonam Yadav, another hugely acclaimed exponent. “Amelia is a lot quicker”, he added, “which creates a lack of time for batters to respond to it.”

“The googly is something I’ve had since a young age,” Kerr said. “I naturally started bowling it by accident and then my coach Ivan Tissera kind of taught me how to get it consistent. It took a few years of practice to start bowling it in games consistently and Poonam Yadav is one of the best bowlers in the world. It’s cool getting to watch her play as I developed. She is a quality bowler, but with her height and her pace she is a completely different bowler, and much slower through the air than I am.”

Many of New Zealand’s most experienced players, including veteran allrounder Suzie Bates, captain Sophie Devine, and Martin believe that it is this versatility in Kerr’s batting and bowling as well as her temperament that have so far defined the might in her fight against the most formidable opponents. Add to that her precocity and enterprise, it’s a combination that only augurs well for New Zealand and the women’s game at large.

“Melie [Kerr] is probably once-in-a-generation type player for New Zealand,” Martin said after the India game where Kerr carted Poonam for 18 in the penultimate over but failed to avert a three-run loss. “She works really hard at her game. She has a lot of support outside of cricket.

“And she’s someone that takes her responsibility – she feels pressure like we all do but she really takes it with a mature outlook. And you don’t expect someone 18, 19 to have the cricket knowledge that she does…She’s an exceptional young talent and someone that I think will have a long successful career.”

Annesha Ghosh is a sub-editor at ESPNcricinfo