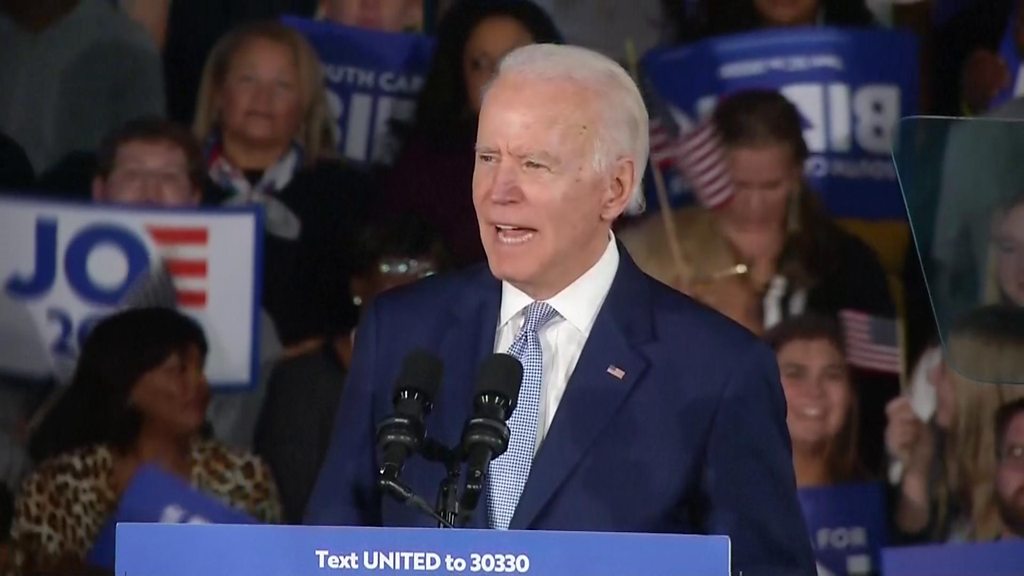 Joe Biden has been handed a huge boost in the race to challenge President Donald Trump in November’s election.

Mr Biden, a former vice-president, won decisively in South Carolina’s primary, where voters chose which Democrat they want to be the party’s candidate.

Left-winger Bernie Sanders came second in South Carolina – the fourth state to vote in the months-long primary season – and remains in the lead overall.

Another 14 states vote on Super Tuesday this week.

By the end of Super Tuesday, it could become much clearer who the nominee will be.

This is Mr Biden’s first-ever victory in a primary in what is his third run for US president.

In his speech welcoming the result, the 77-year-old said: “Just days ago the press and the pundits had declared this candidacy dead. Now, thanks to all of you – the heart of the Democratic Party – we just won, and we’ve won big.”

What happened in South Carolina?

Mr Biden won 48.4% of the share, ahead of Mr Sanders on 19.9% and billionaire hedge-fund manager Tom Steyer on 11.3%. It is Mr Steyer’s best performance of the primaries, but he will now end his campaign, leaving seven candidates in the running.

Mr Biden had been pinning his hopes on a strong result in the southern state, after performing poorly in Iowa, New Hampshire and Nevada.

Victory allows Mr Biden to make the case that he is the best-placed moderate Democrat to take on Mr Trump.

Candidates who have won more than 15% of the vote in South Carolina are awarded delegates, who will then go to the party’s convention in July to support their Democratic candidate.

In his speech, Mr Biden attacked Mr Sanders without naming him.

“Folks, win big or lose, that’s the choice,” he said. “Most Americans don’t want the promises of revolution. They want more than promises. They want results.”

Super Tuesday is the most important date in the race to pick the nominee.

Democrats in 14 states will vote (as well as American Samoa and Democrats Abroad). A massive 1,357 delegates will be distributed – almost a third of all those available through the entire primary season, and the two most populous states, California and Texas, will be voting.

The entire picture could change in one day. Or we could see Mr Sanders cement his lead as the front-runner – and even extend into a near-unbeatable lead.

This will also be the first time that New York billionaire Michael Bloomberg will be on the ballot. The performance of moderates like Mr Biden on Super Tuesday will be determined to some degree by that of Mr Bloomberg.

We’ve pulled together a guide on what to look out for in each state on Super Tuesday.

How did Biden win?

South Carolina had been billed as Joe Biden’s last stand – where he poured time and resources into securing a positive result. Just a few weeks ago, as his poll numbers sank across the nation, it also appeared it would be his campaign’s final resting place.

Instead, after a week of furious effort, South Carolina gave Biden his first primary victory of the year – his first win in any of his three presidential bids, in fact.

Biden may have one man in particular to thank for his success: Congressman James Clyburn, a powerful voice in the state’s black community, who endorsed the vice-president on Wednesday. Exit polls indicate Clyburn’s backing was an important factor for about half of the primary voters – and probably one of the reasons Biden posted such a dominating performance among the state’s black voters.

If he can match that kind of showing in states to come, he’s going to give Bernie Sanders a tough fight.

Biden is going to have to hope his success in South Carolina translates into a surge on Super Tuesday without much assistance from his campaign, however. He only recently began advertising in the upcoming states, and a Saturday afternoon trip to North Carolina was the first time he left South Carolina in almost a week.

He’s still running on a wing and a prayer, but at least for one night and in one state, those prayers were answered.