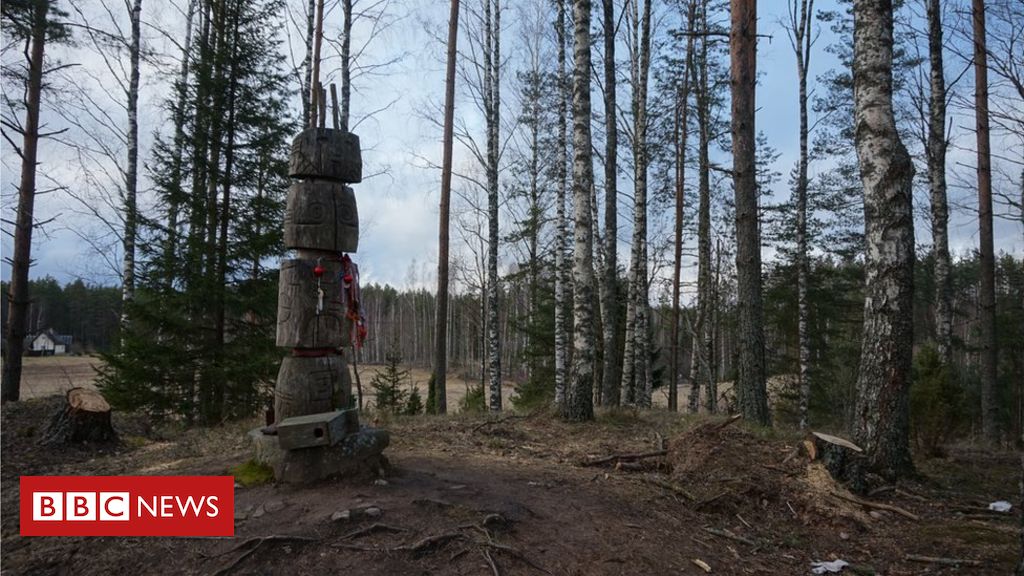 “It’s much more than a frustration, it’s a very strong feeling,” says community leader Oie Sarv, who spent much of her childhood in Russia. “It’s like your roots have been cut through.”

She is one of the people of Setomaa, a traditional region that straddles Estonia and Russia, but who now struggle to maintain their way of life because the border is becoming increasingly hard to cross.

For a while a visa agreement between the EU and Russia made it relatively simple for people living in the border region to visit either side. But since the start of 2018, the Russian authorities have greatly restricted the number of visas issued.

Relations have always been fraught between Russia and its Baltic neighbour, but worsened in recent years. For the Seto people, the inability to cross the border can be heartbreaking.

Eevi Linnamae lives in the tiny hamlet of Serga where she looks after a small Orthodox chapel. She laments that, because of the border, her mother and father are buried apart, which she says is “very tragic for the family”.

Over the years, the difficulties of living in the border area have led many families to move away, leaving a succession of “ghost villages” with 10 or fewer inhabitants.

Setos have a unique culture with their own language and traditions. Seto Leelo, a type of polyphonic singing specific to the region, is listed as a form of Intangible Cultural Heritage by Unesco.

Seto ancestral territory covers an area of around 17,000 sq km (6,550 sq m), which nowadays is split between south-eastern Estonia and Russia’s Pskov Oblast (region). At least two-thirds of the land is on the Russian side, along with the historical capital of Petseri.

But around 4,000 people live on the remaining Seto land in Estonia, with just 300 in Russia, according to a 2013 census. There is also a sizeable Seto diaspora, with around 10,000 Seto-speaking people elsewhere in Estonia and worldwide.

Unlike most of Estonia, which is nominally Lutheran and mostly atheist, Setos are overwhelmingly Orthodox Christian. But some of their beliefs and customs predate Christianity.

One crucial custom is visiting the burial sites of ancestors, including sharing food at the graveyard on holidays.

The land is integral to Seto identity. “For the Seto people, and also for Estonians, they don’t say that home is just anywhere,” says Helen Kulvik, a tour guide and co-leader of the Seto Institute, which co-ordinates and promotes research into Seto culture.

“The soil and [physical place] matter,” she insists.

Setos also have their own king, Peko – a god of crops and fertility. Peko is said to sleep beneath the monastery, over the border in Petseri.

Why is the territory split in two?

Until Estonia’s independence in 1918, all of Setomaa was part of the Russian Empire.

In 1920, the Treaty of Tartu was signed, demarcating the two states so Setomaa was ceded to Estonia.

After Estonia’s independence was restored in 1991, a formal border split Seto communities, farms and church districts in two.

As well as creating difficulties for families, the border is a problem for business owners.

Reika Horn runs a restaurant in the town of Obinitsa and serves traditional Seto food.

Many of her ingredients can only be bought in Petseri and, even though she has a commercial visa, they cannot be brought back across the border.

Where it all went wrong

In the 1990s, crossing the border remained straightforward. Estonian and Russian municipalities drew up lists of people living in the region, who could then move freely.

Even so, many Setos on the Russian side took advantage of a resettlement program offered by the Estonian government.

When Estonia joined the European Union in 2004, border crossing became more complicated, requiring the use of visas.

An agreement for multi-entry “cultural relations” visas for local people was drawn up and accepted by Russia in 2009.

Cultural relations visas were officially used for school and museum visits, and for performances by singing and dancing groups.

Unofficially, they were also used by many people to visit family, friends and graveyards, says Andy Karjus, a visa co-ordinator for south-eastern Estonia. “[It] worked really well until the beginning of 2018,” he explains.

Then the Russian consulate began asking for extra documentary proof, including references from “cultural group” leaders and evidence of the groups’ official registration, despite the EU-Russia agreement clearly stating that only a letter of invitation was required.

Russian authorities also began rejecting applications, even when all the requested documentation was provided. The BBC has approached the consulate but has not received a response.

Where we are now

In a typical year, says Mr Karjus, around 2,000 cultural relations visas were issued.

In 2019, however, only 430 came through the system. In the last four months of 2019, all multiple-entry visas applications made through the visa co-ordination service were rejected.

As well as the heightened political tensions, another reason for the sudden restriction is probably financial. Cultural relations visas must be free, but the Russian state can charge for commercial and tourism visas.

Many Setomaa residents have now given up on obtaining cultural visas.

Eevi Linnamae cannot get hold of a commercial visa as she is a pensioner, so now she is faced with either buying a tourist visa or not crossing the border at all.

Even though for the moment much of the Setos’ ancestral territory is out of reach, interest in Setomaa is seeing something of a resurgence. Tourism is on the rise and some of the Setos who live outside the region are buying holiday homes to reconnect with their roots.

More stories from the Baltics and Russia