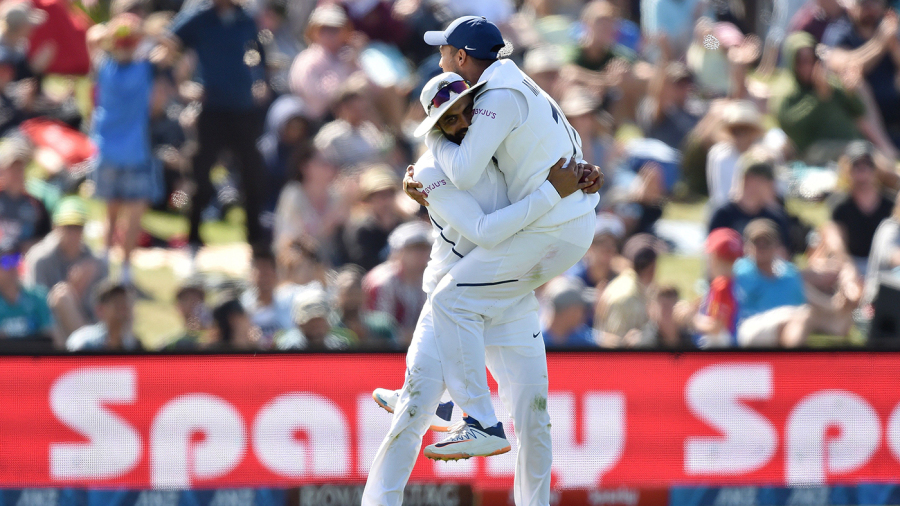 India began the second day needing a big effort just to stay alive in the Christchurch Test, but so big was their bowling effort they ended up with a first-innings lead of seven runs. However, another lower-order rally by New Zealand followed by yet another varied and special bowling performance brought them right back into the contest. After a 16-wicket day, India were 97 ahead with four wickets in hand. One of the six wickets lost was nightwatchman Umesh Yadav.

There was a bit of everything to enjoy for bowling enthusiasts: Mohammed Shami and Jasprit Bumrah looked unplayable for three hours with their seam and swing, Trent Boult swung the ball, Tim Southee used the surprise bouncer, Colin de Grandhomme mixed swing and seam, and Neil Wagner and Kyle Jamieson found disconcerting bounce. Throw in two wickets and a superman catch for Ravindra Jadeja, Jamieson’s innings of 49 and 51-run partnership with Wagner, Virat Kohli’s pumped-up reactions to New Zealand’s players and crowds followed by another early dismissal to end a personally dismal tour, and you had a day bursting at the seams with action.

This was a pitch unlike any seen in New Zealand in recent times. It quickened up from day one and allowed more seam movement, which brought Shami and Bumrah right into the game. However, it is one thing to have conducive conditions and quite another to barge through on the back of them from so far out of the game. India had toiled for 23 overs on the first evening for no wicket, and began the day just 179 runs in lead.

They were handed a lifeline through the prodigious seam, but they also corrected their lengths accordingly from the first evening. It was also their skill and pace that made life difficult for the batsmen. They also had to show fitness: Bumrah had to bowl a spell in each of the four hours that India were on the field, Shami bowled 12 overs unchanged either side of lunch followed by another spell after a half-hour break.

While it was Yadav who got India the first breakthrough, Shami and Bumrah were the ones who tortured the batsmen with their seam movement. Bumrah’s seam movement accounted for the early dismissal of Kane Williamson, who played at a wide ball he would have left alone otherwise. Kohli, looking away from his team, evidently let out a Hindi expletive but didn’t get in the personal space of the batsman. This was not even close to the most pumped up he would be on the day.

Ross Taylor and Tom Latham batted with better intent, adding 40 in little over 10 overs, but Taylor perished trying to dominate the weak link on paper, Jadeja. He stepped out in premeditated fashion, and didn’t have a bail-out option when Jadeja pulled the length back. Yadav then took an amazing catch running back from point, despite over-running the ball a little.

It was still not panic stations as Latham and Henry Nicholls got into a partnership. The heart of the resistance, Latham had been excellent in his judgement until he left one ball too full from Shami, and it hit his stumps. Moments later, Kohli dived in front at second slip to send Nicholls back. He was so pumped up he was asking the crowd to “shut the **** up” by now.

The lunch break came at the right time for India as Bumrah and Shami came back well rested, and unleashed hell. They were now bowling 145kmph legcutters regularly, hoping at times that it would seam less so as to take the edge. That wasn’t needed with BJ Watling and Tim Southee, who fell in the same Bumrah over. Watling, tied down for no run off 15 balls, tried to break the shackles with a big drive, but found a diving Jadeja at point. Southee could be forgiven for just poking at one; the bowling was just too good.

de Grandhomme and Jamieson then started to play their drives, and as both the main bowlers came off they saw an opportunity. Only for Jadeja to rip one past the outside edge and into the off stump of de Grandhomme for 26 off 44. At this point, India’s high-risk batting in the first innings looked like a masterstroke. New Zealand had survived for only two overs fewer than India, but they were 65 behind. It didn’t look like they would last much longer as Shami drew a top edge from a Wagner, which Hanuma Vihari dropped at fine leg.

That catch would have made it 190 for 9, but instead Wagner went on to frustrate India even as Jamieson looked like the most comfortable batsmen on either side. Wagner finally nailed one hook after the partnership had crossed 51, but Jadeja intervened with an absolute stunner 20 metres off the deep backward square leg fence. It went flat and fast, but Jadeja moved sharply to his right, leapt up with his legs sort of cycling through the air and stuck his left hand out over his head to stun Wagner. Shami soon drew another top edge from Jamieson, one short of his fifty, to get India the lead.

Nobody knew how the pitch would be on day three so every run was vital now. This is where the quality in New Zealand’s attack shone through as they attacked India from various directions. Boult got early swing after angling one across to repeat Mayank Agarwal’s first-innings dismissal. India’s lead 15 for 1. Southee repeated Prithvi Shaw’s dismissal from the second innings in the first Test with a short ball that cramped him up. India’s lead 33 for 2.

Kohli walked in at seemingly the perfect time as both Southee and Boult were towards the end of their spells. He got the better of wide lines, and comfortably drove the full ones. However, de Grandhomme bowled the perfect ball to an attacking batsman. Kohli committed to his outswing, but then got done in as the ball seamed back in to repeat his first-innings dismissal. India’s lead 58 for 3.

Now New Zealand shut down India’s scoring, and began to bounce Cheteshwar Pujara and Ajinkya Rahane from both ends. Wagner’s angles and unpredictability, and Jamieson’s steepling bounce made life difficult for them. Rahane top-edged one soon enough only for de Grandhomme to drop him at deep backward square leg. However, it brought Rahane a world of pain as both bowlers kept peppering his knuckles and helmet. All for an extra 10 runs added to the partnership across six overs of pure torture. Eventually a bouncer that kept low was played on by Rahane, but these first signs of variable bounce would have given India hopes if they were to get some sort of defendable lead.