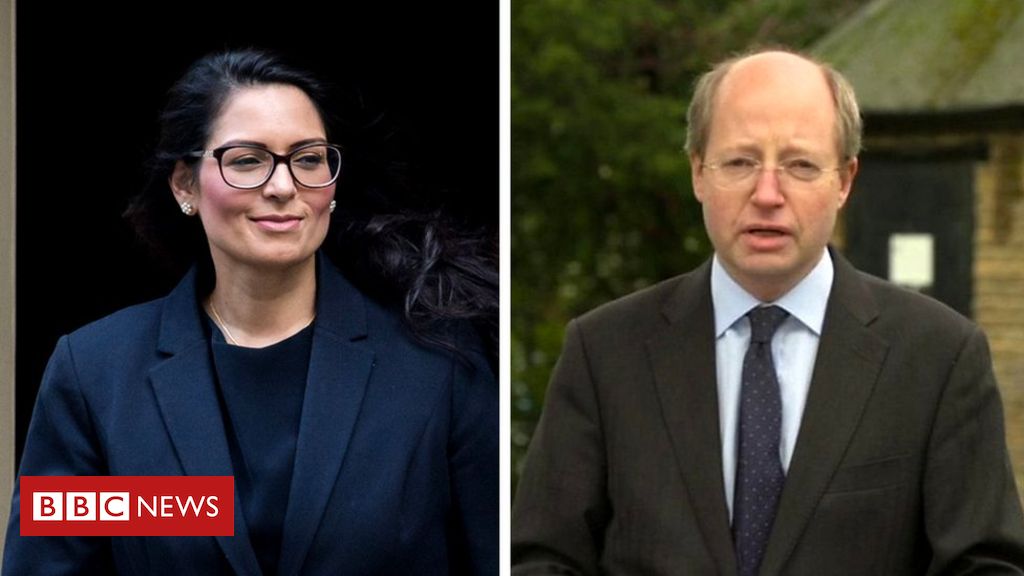 Health Secretary Matt Hancock has defended Priti Patel as “courteous” following bullying claims made by the ex-top civil servant in her department.

Sir Philip Rutnam, the Home Office’s most senior official, resigned on Saturday citing a “vicious and orchestrated” campaign against him.

The BBC has also learnt that a formal complaint about Ms Patel’s conduct was made when she was employment minister.

The home secretary has previously denied she mistreated staff.

Responding to Sir Philip’s departure, shadow chancellor John McDonnell told Sky News the situation was “unprecedented” and suggested that Ms Patel was “on the way out”.

He said he now intended to take legal action against the Home Office on the basis of constructive dismissal.

The BBC’s home affairs correspondent Danny Shaw has also learnt that a formal complaint about Ms Patel’s conduct was made when she was employment minister at the Department for Work and Pensions. The substance of it is not known, nor whether it was substantiated or followed up.

The complaint is believed to have been made by a member of her private office – a team of six to eight civil servants which works closely with an individual minister.

A spokesman for Ms Patel said she was “not aware” of the complaint and the government, while it did not deny the claim, said it would not comment on personnel issues.

One Whitehall insider said Ms Patel had created a “hostile and unhappy” environment for civil servants there by questioning their capability and undermining their performance.

“I felt very sorry for people in her private office – they felt bullied,” they said.

David Penman – head of the FDA union which represents senior civil servants – said no formal complaints had been made about Ms Patel in her time at the Home Office but added “that needs to taken in the context that there is no formal policy for making complaints against ministers: no code, no procedure, no transparency.”

“Staff will have zero confidence in a process which is basically ‘trust the Cabinet office behind closed doors to deal with it’.”

He added that she was “probably closer to where the public are on the issues of law and order than any home secretary in recent history”.

Labour leadership contenders have also commented on Sir Philip’s departure, with Rebecca Long-Bailey calling it “an example of this Tory government in disarray” and Lisa Nandy saying the Home Office was “in chaos”.

Labour’s Sir Keir Starmer called for an immediate investigation and said Ms Patel should come to Parliament to “explain the allegations”.

And the former head of the civil service, Lord Kerslake, argued that the home secretary might have to resign if Sir Philip wins his legal action.

Lord Kerslake, who has previously advised the Labour Party, said the resignation – and the way in which Sir Philip left – was “extraordinary”, adding that it will send “shockwaves” through most of the civil service.

According to BBC correspondent Iain Watson, allies of Ms Patel are privately suggesting that Sir Philip was not up to the demands of the job.

It will also have to respond to a soon-to-be published independent report on the Windrush scandal – which saw many of those who had arrived in Caribbean countries between 1958 and 1971 detained or deported despite having the right to live in the UK.

Head of the civil service Sir Mark Sedwill thanked Sir Philip for his “long and dedicated career of public service” and said he received the resignation “with great regret”.

He said Shona Dunn, who had been Sir Philip’s deputy, will become acting permanent secretary.

Sir Philip’s departure, and the manner of it, goes way beyond any normal policy problems or clashes.

He took aim not just at Priti Patel, but alluded to what he said was a “wider pattern” in government.

Add this to the resignation of Sajid Javid, the former chancellor who expressed concerns about how the government is behaving, there is mounting evidence of unhappiness with how Prime Minister Boris Johnson and his team are running things.

Certainly it is a government in a hurry, willing to rattle cages in order to get things done.

But governments who want to get things done need an effective civil service to make things happen. A very public breakdown in trust like this does not help that cause.

Indications at this early stage are that Ms Patel’s position is secure. But with an employment tribunal in the offing, pressure may well build in the coming weeks.

If Sir Philip pursues his case as he says he will, exactly what happened behind closed doors may soon be out there for all to see.