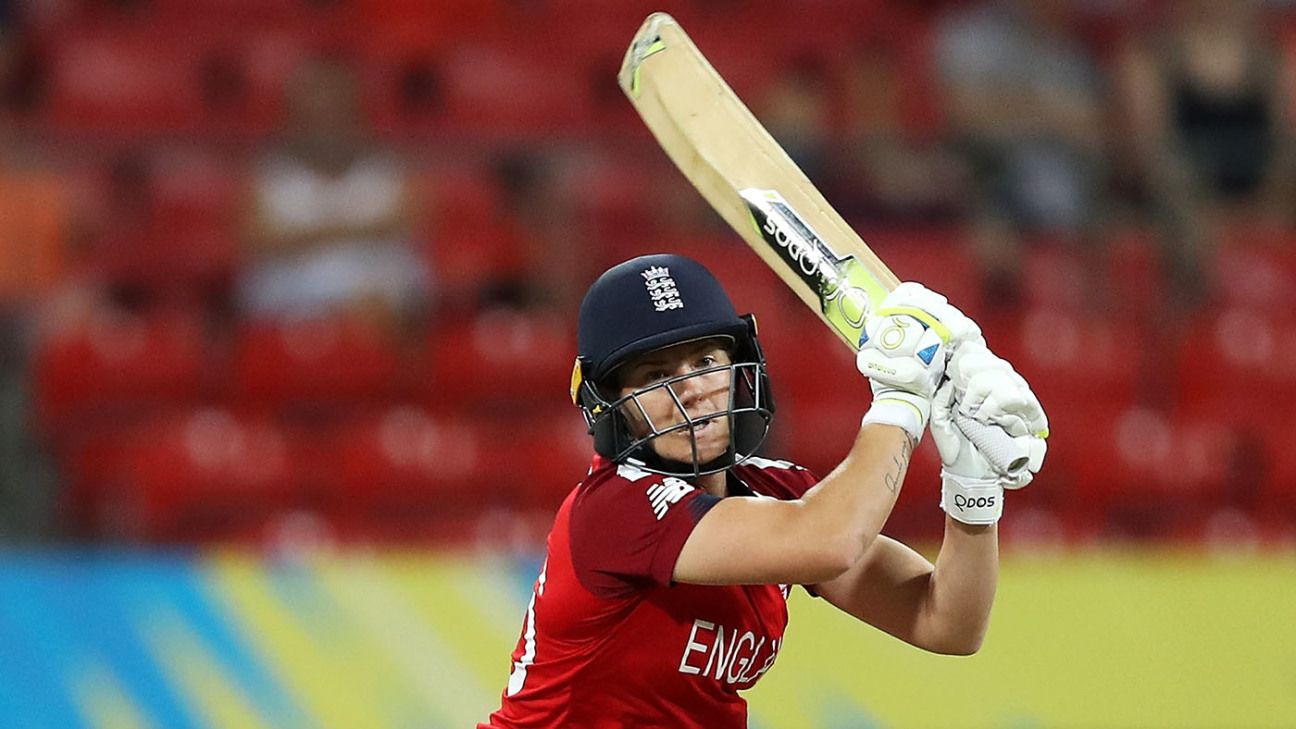 Heather Knight has praised Amy Jones‘ response to being demoted down the batting order, hailing her cameo in England’s 46-run victory against West Indies – which sealed a spot in the T20 World Cup semi-finals – as full of character.

England had been experimenting with Tammy Beaumont, traditionally a top-order batsman, at No. 6 or No. 7 through the tri-series against Australia and India in the lead-up to the World Cup and once the tournament began. But, with Jones having managed only 23, 0 and 2 as an opener in the first three World Cup fixtures, Beaumont was sent in to open with Danni Wyatt against West Indies.

Though Beaumont was out for a second-ball duck, Wyatt contributed 29 off 27 balls and Jones hit a fluent 23 not out off 13 at No. 6. Katherine Brunt added an unbeaten 10 off four balls to bump the England total up after Natalie Sciver top-scored with 57 off 56 balls.

“Amy’s had a few low scores and we felt like we wanted to change something,” Knight, the England captain, said. “In tournament cricket you have to react quite quickly and I think Amy showed amazing character to come out like that and play how she did today. She’s still a very important player for us. Obviously it didn’t come off with Tammy but that was the order we wanted to go with.

“We talked before the game about being really smart on a low wicket and having a batter bat through, which Nat did brilliantly. We had a few cameos at the end, which got us up to a really good score on that wicket – both Amy and Katherine did really well to add some late impetus.”

Knight admitted her side had been “playing knockout cricket” since losing their first World Cup fixture to South Africa, arguably the surprise packets of the tournament with three wins from three matches for six points, although England, also on six points from four matches, have a superior net run rate. Earlier in the day, South Africa, who play their final group match against West Indies on Tuesday, sealed their place in the semi-finals with a 17-run win over Pakistan on the same Sydney Showgrounds pitch.

“We knew it was going to be a slow wicket,” Knight said. “We’ve played a lot on slow wickets recently, we’ve been out in Malaysia before Christmas, so we knew we were going to have to be very clever, clever with the ball as well, and I think it was just very professional. We knew we had to keep it simple and that’s what we did today and I’m really pleased.

“I was getting a bit nervous watching Pakistan, getting our analyst to do a few calculations, but it was very simple, we knew we had to win.”

In another personnel change against West Indies, 21-year-old Mady Villiers came in for Lauren Winfield as England opted for an additional spinner. Making her World Cup debut in just her fourth T20I, offspinner Villiers claimed a wicket with her fourth ball, a sharp return catch dismissing Shemaine Campbelle in what turned out to be a wicket maiden. She finished with 1 for 30 from her four overs.

“Because of the conditions, we felt like we wanted another spin option and Mady’s been chomping at the bit to get out there,” Knight said. “She’s a very good fielder as well. She’s a great kid and I’m really pleased for her today. She put in a really good performance so we obviously have to sit down, have a look what our best line-up is for that semi-final.”

Sarah Glenn, the 21-year-old legspinner, took 2 for 16 off her four overs but it was Sophie Ecclestone who starred with the ball, taking 3 for 7 off 3.1 overs, claiming her 50th wicket in T20 internationals in the process.

Ecclestone, who holds vast experience despite not turning 21 until May 6, had a few words of wisdom for Villiers.

“She’s quite like me, quite a fiery character, and she gets mad at herself too easily,” Ecclestone said. “I told her to stick to her plans and stick to her strengths, and I think she did. The catch as well, I think she was really pleased.

“I’m really happy with how I’m bowling and hope it continues, especially with Glenny and Maddy in the team to have a spin companionship. I really get on well with them, they are some of my best friends now, and it’s really nice to have them performing well and winning games for England. It’s a dream come true really.”

England seamer Kate Cross was sent for scans after being stretchered off when she injured her ankle during the pre-match warm-up. Cross is yet to feature in the World Cup. West Indies captain Stafanie Taylor was also due to have scans after suffering an apparent groin injury which forced her to retire hurt and leave the field on a stretcher.