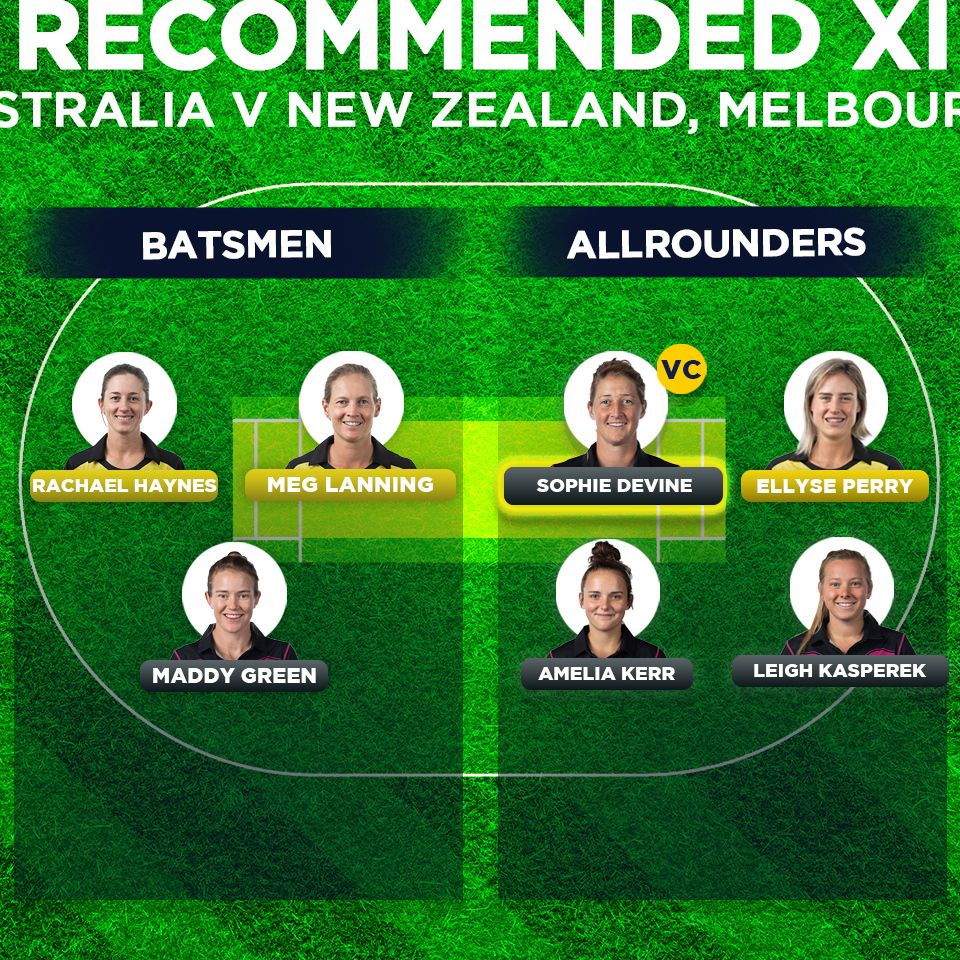 NOTE: Ellyse Perry did not train on match eve due to a sore hip and a call on her availability will be taken on the day of the match, so make sure to take a final call on your fantasy team only after the toss.

Healy found her feet against Bangladesh, scoring 83 runs off 53 balls. In a knockout fixture, you cannot look past an experienced player like Healy. Plus, she has enjoyed a good run against New Zealand in the last few years. Since the start of 2017, she has scored 208 runs at an average of 34.66 and a strike-rate of 137.74 against New Zealand.

Devine has had a fantastic year in T20Is. She has scored 398 runs and picked up 7 wickets in the format. Again, come the big match, we are backing her to deliver. Devine has featured in 7 knockout games (semi-finals or finals) in T20Is and averages 30.6, and this is a virtual quarter-final, afterall.

Haynes is the player to back in a crisis. She gets her team out of precarious situations more often than not. She has scored 221 runs against New Zealand, the most for her against a single opponent in T20Is. These runs have come at an average of 31.57 and a strike-rate of 120.76.

Lanning was the one who strung together a partnership with Haynes against Sri Lanka to get Australia out of trouble and eventually win the game. She has scored the most number of runs in T20I tournament semi-finals and finals – 410 runs at an average of 45.55.

Perry may not have done much of note in the World cup so far but you can’t look past her in a big game (if she’s fit and picked). She could be promoted up the order as well.

She is the second highest wicket taker in the format for Australia with 80 wickets. Since 2019, Schutt has picked up at least 1 wicket in all games that she has featured in except the game against India last week. So it is almost certain that she will pick up a wicket or two in this game as well.

This highly rated 19 year old has already risen up the ranks. Her ability with the ball is well known. She has picked up 7 wickets in her last 5 T20Is at an economy of 4.68. But she is also capable of scoring some runs lower down the order. Her unbeaten 34 off 19 balls against India is testament to her batting skills.

Jonassen’s 5 wickets are the most for Australia so far in the tournament. Her best figures in a T20I (5 for 12) came at the Junction Oval against India just a few weeks back.