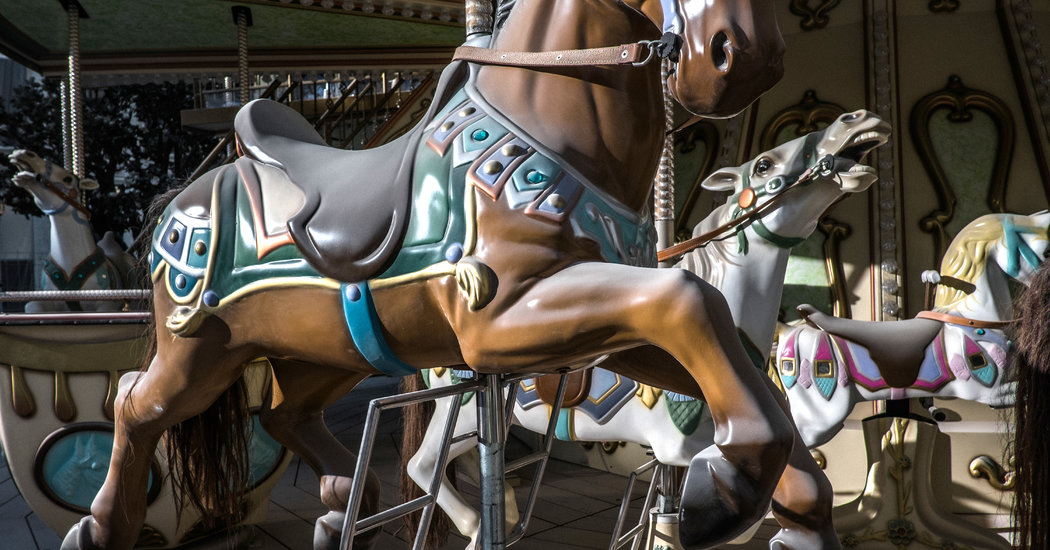 MOSCOW — A young girl finds a magic necklace made of mushrooms, but then an evil gnome steals it. Adventure ensues. According to her creators, Alfreya, the hero of a new children’s book who was conceived for Russia’s first theme park, is “an ordinary girl 10 to 12 years old with large, thoughtful eyes.”

One thing she is not is a Disney character. Opening a real international Disneyland in Moscow would be out of the question amid the current political standoff with the United States.

But Russia’s decades-long quest to build a theme park, which began during the Cold War rivalry with the United States, is finally reaching its fairy-tale ending.

The $1.5 billion Dream Island, when it opens on Saturday, may certainly remind some visitors of Disneyland. In place of Elsa from “Frozen,” there will be the Snow Queen, and in the Russian version of “The Jungle Book,” the jungle is populated by talking dinosaurs. Developers say the park will be inhabited by dozens of fairy-tale characters, all domestically produced.

Dream Island doesn’t mind if you invoke Disneyland to describe the park, but will point out that it has no connections to the Happiest Place on Earth.

“The word Disneyland is on people’s tongues,” said Alena Burova, a publicist for the site. “In Russia, we say Disneyland when we mean just a theme park.”

The park has been built only now because it will benefit from something more essential than snow queens and fairy princesses: a large pool of middle-class consumers in the Russian capital, something that was missing when two previous attempts failed.

So, some 60 years after the Soviet leader Nikita Khrushchev first floated the idea of building an analogue to Disneyland, President Vladimir V. Putin stopped by to inspect the park on Thursday.

For Amiran Mutsoev, a former shopping mall developer who is the park’s owner and director, the site is a major bet that middle-class purchasing power will hold up despite Western sanctions and low prices for oil, a major Russian export. That the opening coincides with the coronavirus outbreak, when some people may want to avoid crowds, is another concern.

“Will people come, or will they not come?” Mr. Mutsoev asked. “Of course, we are worried.”

The park expects five million Moscow residents and two and a half million tourists, mostly from elsewhere in Russia, to visit the animated dinosaurs and haunted houses each year, Mr. Mutsoev said. Tickets on a weekend cost 11,000 rubles, or about $163, for a family of four.

The average monthly pay in Russia last year was 46,073 rubles, or about $683. And it has been dropping in inflation-adjusted terms. The minister of labor recently proposed lowering the minimum wage — because the cost of potatoes had gone down. Over all, last year about 14 percent of the population lived on less than $160 per month, the official poverty line.

But Moscow and its 13 million residents are an exception. The average wage in the capital last year was about twice the national average. The trickle of oil money has already given birth to new businesses, some of the world’s largest malls and what sociologists see as pent-up demand in the Moscow middle class for better government services.

Well-to-do families, too, are a precondition for a theme park. Khrushchev proposed building one in Moscow called Children’s Wonderland after a 1959 visit to the United States when he sought to quickly replicate some American economic achievements, such as fast-food restaurants and widespread corn cultivation in the Midwest.

“He wanted to do it,” his granddaughter Nina Khrushcheva, a professor of international affairs at the New School in New York, said in a telephone interview. “It was an idea to mimic the soft power that America has to make people’s lives more interesting and better.”

But the project got bogged down in debates over which themes to promote. The military wanted a martial element, with tanks.

The Soviets eventually proposed a park around cultural, educational and scientific themes. The attractions, a Soviet magazine wrote, “will be designed so children can learn of conquering space, about radio electronics and amazing successes in chemistry, physics and other fields of knowledge,” while also somehow being fun. The government set aside land outside Moscow, but never broke ground.

In the early post-Soviet period, President Boris N. Yeltsin sought to revive the idea by forming a nonprofit organization to develop the still vacant site. This group enlisted children to draw their own characters and fantasy lands as a basis for a park, but it lacked financing and instead leased the land to an outdoor market, a motorcycle club and a cement factory.

The current iteration emerged as a partnership between the City of Moscow, eager to appease its politically important residents, and Mr. Mutsoev, the developer. The city provided the land for free. VTB, a state bank, kicked in a $600 million development loan.

Nadya Soloyeva, a Moscow mother of two daughters ages 8 and 4, said her job in public relations allowed her to afford the tickets, but she wondered whether the new fairy-tale characters would have the same emotional draw as Disneyland’s.

“Everybody is comparing these prices with Disneyland,” which now run $200 per person, she said. “But will they sell emotions, like Disneyland?”

Disney-like medieval towers rise at the entryway. But behind them lie gigantic, rectangular buildings recalling jumbo jet hangars, covering 74 acres. Glass cupolas enclose some areas. The developers say it is the largest covered park in Europe — and the only option for remaining open through Moscow’s long, grim winter.

The theme park has nine zones. Five were created by “Russian artists specifically for Dream Island,” according to a promotional brochure. The others are licensed attractions: Hotel Transylvania, from Sony Pictures; the Smurfs, from the Belgian company IMPS; the Teenage Mutant Ninja Turtles, from Viacom; and Hello Kitty, from Sanrio of Japan. The Cuningham Group, a Minneapolis firm that has designed a variety of theme parks, including Warner Bros. Movie World in Madrid, created all nine themed zones based on the Russian and foreign-licensed concepts.

One of the newly conceived zones drew from characters in a classic Russian adaptation of “Pinocchio.” The centerpiece zone is the Snow Queen’s Castle, ruled by a fierce and beautiful monarch “wielding power over snow and cold,” not unlike Disney’s princess in “Frozen.” Both characters are based on a Hans Christian Andersen tale.

Mr. Mutsoev said he had hired teams of artists and writers and was confident in the pull of his new characters. He has published new children’s books to flesh out the characters and tell their adventures.

“Disney has its snow queen, and we have ours,” he said.

And he said he was glad he had ditched previous Russian ideas of one-upping Disneyland by infusing a park with educational elements: “Not everybody wants to read Tolstoy, especially if you are 8 years old.”