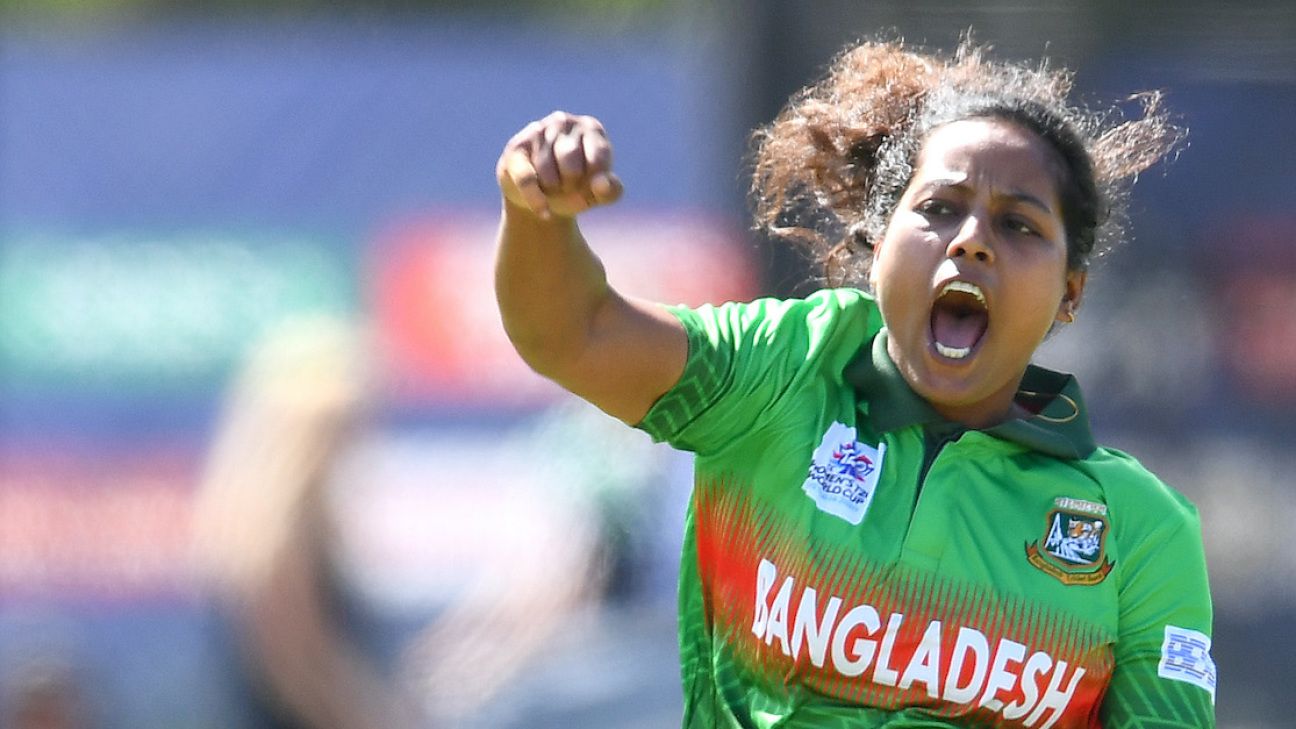 Tears streamed down Bangladesh medium-pacer Ritu Moni‘s face at the Junction Oval’s press conference room as she took her mind back to where her journey began – Bogra – and to Muslim Uddin, the man who helped her live her dream.

It is in Bogra, a northwestern city in Bangladesh, that the dreams of many of the team’s current women’s cricketers started taking shape under local coach Muslim. As Moni, one of Muslim’s students, reflected on the career-best 4 for 18 – also the best so far at the ongoing T20 World Cup – she picked up against New Zealand on Saturday, memories of a personal loss – Muslim’s death on February 10 – left her sobbing inconsolably.

“I started training under him and I am here today because of him,” Moni said after Bangladesh’s 17-run loss. “He passed away soon after we arrived in Australia for the World Cup. It is a big loss for all of us, considering how he helped so many of us to realise our dream of playing for Bangladesh. He was a great person, and has played a big part in my life.

“We were to play a practice match a few days after his death, and it was quite difficult for me to get over the shock. But I told myself, ‘Muslim sir showed a lot of confidence in me. I must try to do my best in the tournament because it would be the best I can do for him.’ If he were alive today, he would have been able to see this day in my life.”

In an international career spanning nearly eight years, Moni, now 27, has made 45 international appearances, scoring 292 runs and taking 17 wickets across the white-ball formats. The defining moment of her career, though, arrived on Sunday, her maiden four-for orchestrating New Zealand’s biggest collapse in T20Is – 8 for 25 – from the fall of the third wicket.

“Sometimes simple and uncomplicated bowling can get you wickets, break partnerships, so that has been one instruction from our coaches I have tried to respect.”

By the innings break, Moni’s exploits, complemented brilliantly by captain Salma Khatun’s 3 for 7, had begun inspiring hopes of an unlikely upset in Group A as New Zealand set Bangladesh a modest target of 92.

New Zealand’s slide began with the dismissal of Suzie Bates, their leading run-scorer in the format. Hurled at a gentle pace hovering just above 90kph, Moni’s inswinger on off had enough benignity to lure Bates to aim towards midwicket, only for her to lose her middle stump. Bates’ wicket in the 13th over was followed by Katey Matin’s in the next as she holed out to point, in a bid to force some pace on a slow, sun-baked Junction Oval track. It wasn’t long before Moni’s control and slowness through the air earned her two wickets in her fourth – and the innings’ 19th – over, with Fargana Hoque taking a stunning catch diving forward and Fahima Khatun gobbling up Amelia Kerr’s square drive with ease.

“I didn’t do much, to be honest; just maintained my line and length,” Moni said, praising the role played by head coach Anju Jain and assistant coach Devika Palshikar, both former India players, in her growth as a medium-pacer. “Devika ma’am has been of incredible help. She makes sure that at the nets I am focused on my line and length. She asks me to bowl in, say, one area over after over.

“And Anju ma’am says the same thing about bowling in my block, you know, to not try anything fancy. Sometimes simple and uncomplicated bowling can get you wickets, break partnerships, so that has been one instruction from our coaches I have tried to respect.

“And Javed Omar [the former Bangladesh men’s Test cricketer, who was appointed manager of the women’s team last year] has also encouraged me to believe in myself. I hope that the confidence I have got from today’s performance takes me ahead in the future.”