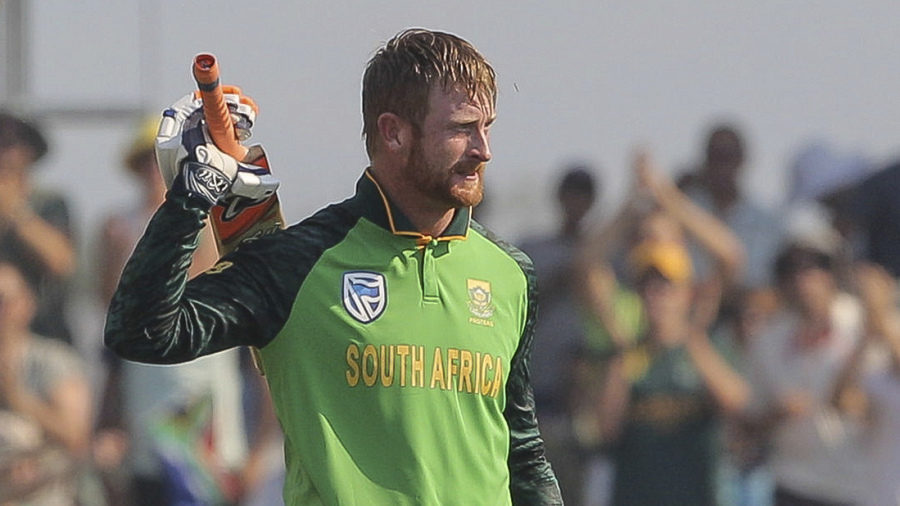 Heinrich Klaasen‘s maiden ODI century, David Miller‘s second successive half-century in this format and a collectively impressive South African performance in the field, led by Lungi Ngidi, earned the hosts a big win in their opening ODI against Australia. After two blow-out batting performances in the T20Is, South Africa put partnerships together to post a competitive total and held their composure to keep a strong Australia line-up largely quiet.

Steven Smith‘s 76 and his 84-run partnership with Marnus Labuschagne was Australia’s best hope of chasing down 292, but it was not enough. They needed at least another stand of significance, as South Africa had on a surface where run-scoring was hard work. After slipping to 48 for 3, Klaasen and debutant Kyle Verreynne laid the foundation with a partnership of 78, before Klaasen and Miller built on it with a 149-run stand that allowed South Africa to aim for 300. They did not manage that, but posted a decent enough score for their bowlers to have something to defend, and they did so with good discipline.

None of South Africa’s attack conceded at more than six runs to the over, while both Josh Hazlewood and Australia’s fifth-bowler, made up of D’Arcy Short and Mitchell Marsh did. South Africa opted for a combination of three seamers and two spinners, all frontline bowlers, which worked better than the four seamers, one spinner and maybe a part-timer that they have tried in the past.

Keshav Maharaj was recalled for his first ODI since 2018 and was entrusted with bowling the first over of the defence with a view to burrowing through Aaron Finch’s apparent weakness against left-arm spin. The experiment didn’t work and after two overs, Maharaj was replaced by Ngidi, who had Finch throwing his bat at a back-of-a-length ball and feathering an edge through to Quinton de Kock. But it was only four overs later, when David Warner was caught low down by Verreynne in the covers, that both Ngidi and South Africa seemed to believe, despite the pair they were up against next.

Smith and Labuschagne have enjoyed a golden summer together – since October, their partnership has averaged nearly 100 across formats – and they added the latest chapter in Paarl. Labuschagne was playing international cricket in the land for this birth for the first time and immediately showed what he is capable of. He hit Andile Phehlukwayo for back-to-back fours, taking advantage of width to cut and drive off the back foot. But he could not continue in that vein as South Africa used pace off the ball to slow the scoring rate.

Between the 11th and 27th over, South Africa did not concede a single boundary as they rotated between Phehlukwayo, Maharaj and Tabraiz Shamsi. In that period, South Africa were anxious for a breakthrough, so much so that they reviewed an lbw appeal against Smith, when he was on 14 off Phehlukwayo, that was clearly going down leg.

The required run rate was creeping towards seven an over when Labuschagne tried to launch Maharaj over long-on, but picked out Ngidi. Mitchell Marsh broke the boundary-drought with a four off Shamsi but breaching the rope was still a rarity. Smith managed two more – over mid-off off Anrich Nortje and through midwicket off Ngidi – before a twin strike that left Australia in trouble.

In the space of four balls, Ngidi bowled Marsh with a delivery that seamed back in to him and took off the top of off and Nortje had Smith pinned on the front pad and given out lbw. Australia were 177 for 5 after 35 overs, South Africa were 169 for 4 and it was all set for a thriller. But Australia managed only 18 runs in the 27 balls that followed before Alex Carey’s frustration bubbled over. He tried to hit Shamsi over long-off but Verreynne was stationed on the rope and took the catch that all but ended Australia’s hopes. Shamsi struck once more when he had D’Arcy Short stumped but left it to Verreynne’s catching to finish Australia off. He took a second stunner running in from long-on to cap off a fine debut.

Janneman Malan could not say the same. He became the first man to be dismissed by the opening (legitimate) ball of an ODI on debut and left the field with an injured hamstring in the 44th over of Australia’s innings. Malan had no clue when Mitchell Starc delivered a full, fast inswinger which hit him on the boot and was confirmed out on review. De Kock fell soon after, stuck in his crease trying to run a Hazlewood delivery behind square and nicking off.

Bavuma should have been gone two overs later when he lofted Hazlewood over mid-on but Starc, running backwards, managed to get both hands to the ball but could not hold on. It was not an expensive mistake. Five balls later, Bavuma played on as he tried to cut Pat Cummins but misjudged the bounce. South Africa ended the first PowerPlay on 50 for 3 and with a lot for their middle order to do.

Though known for their aggression, Verreynne and Klaasen only found the boundary four times in the 105 balls they faced together as Australia tightened the noose. Klaasen was on four when Short appealed for an lbw and Australia reviewed but replays showed the ball was missing leg stump. Adam Zampa, as he has done throughout the white-ball series, orchestrated the squeeze with tight lines as pressure built.

Eventually, it told and Verreynne became Cummins’ 100th ODI wicket when he pulled a short ball straight to Marsh at square leg two runs short of a maiden fifty. But Klaasen had grown in confidence through that stand and started to play more expansively, especially against anything short. He brought up 50 off 65 balls with a pull off Zampa.

South Africa were 145 for 4 after 30 overs, with Klaasen well set and Miller due some runs. Much like the previous pair, they could not bat with freedom though Klaasen nailed a straight drive off Hazlewood that was the shot of the innings until he tonked Cummins for six after reaching his century. Between those two points, there was a lot of hard work with Zampa and Starc proving difficult to get away.

Miller held his nerve well and made good decisions about which balls to hit. A touch of width from Starc went for four and he walked down the pitch to meet a Hazlewood delivery and cream it through the covers. Miller scored only two fours and a six in his 54-ball fifty and Klaasen seemed to think the century would evade him. He was on 87 when he tried to pull Starc over backward square, where a fielder was lurking, but top-edged him for six over fine leg instead. His hundred came with a single to square leg and was celebrated silently at first, with a prayer, before he acknowledged the crowd’s applause.

The milestone opened Klaasen up, as South Africa scored 29 runs off the last three overs to set them up for a convincing win. However, they will be careful not get too carried away. Three times before in this summer, in the Test, ODI and T20I series against England, South Africa won the first match of the series only to fall away as the fixtures progress. They have one more chance to claim a trophy before the season is up and it will come next week, in the last two ODIs of the 2019-20 season.