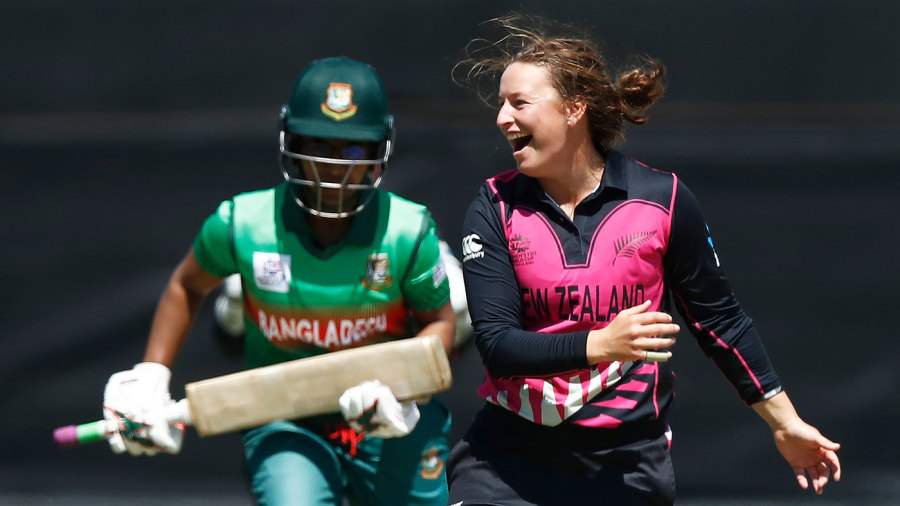 Tournaments are all about surviving and advancing.

New Zealand survived an almighty scare against Bangladesh at the Junction Oval, setting a new Women’s World T20 record for the lowest total defended, but will need to play much better to beat Australia on Monday advance to the semi-finals.

They were bowled out for just 91 having won the toss. It was their sixth-lowest score in T20 internationals and second-lowest total at T20 World Cups, with Ritu Moni taking a career-best 4 for 18 in her first game of the tournament while the skipper Salma Khatun bagged 3 for 7 including the prized scalp of Sophie Devine.

But Bangladesh imploded in the chase under the weight of history and an experienced and disciplined New Zealand attack. They failed to find the boundary or rotate the strike. Two calamitous run-outs triggered a collapse before Hayley Jensen strangled the tail with some wonderful stump-to-stump bowling to take 3 for 11 from her four overs and claim Player of the Match honours. Nigar Sultana fought bravely making 21 in an innings where she was forced to retire hurt for a period after a blow to the face but they came up short.

The result sets up a virtual quarter-final against Australia at the Junction Oval on Monday, with the winner to progress to the semi-final alongside India from Group A.

Having started the tournament with an unbeaten 75 to register a world record sixth consecutive T20I score of 50 or more, Devine’s run of form has come to a grinding halt, but her opening partner Rachel Priest was partly responsible. Bangladesh’s bowlers kept Devine from the strike in the powerplay just as India did in the previous game. She faced just 15 balls in the first 6.5 overs as Priest chewed up deliveries at the other end without doing any damage to the scoreboard. Panna Ghosh, who was strangely omitted from the game against Australia, Fahima Khatun and Salma Khatun bowled superbly to their fields on a surface that had plenty of grass. Priest and Devine could not find any timing against the slow pace and spin. Priest faced 15 dot balls while Devine was at the crease and the skipper eventually succumbed slicing a catch to point. Priest then fell lbw to Salma Khatun attempting a sweep, and burnt New Zealand’s only review as well, having made 25 from 32 with 18 dots.

Moni had not played in Bangladesh’s opening two matches and had not played an international since taking 3 for 1 against Maldives in December last year. But she immediately made an impact castling the world’s number one T20 batter in Suzie Bates with outstanding delivery that nipped back through the gate. New Zealand’s collapse then featured all the stereotypical panicked dismissals. Maddy Green was stumped trying a wild slog having not found the boundary in 15 balls, Hayley Jensen was run out in ridiculous circumstances next ball and Katey Martin offered a return catch to Rumana Ahmed which was dropped, but it bounced off her hands onto the non-striker’s stumps with Jensen unable to get back to safe ground. Moni then forced mistake after mistake through disciplined lines and lengths and her fielders backed her up with Fahima Khatun taking two more sharp chances at point while Fargana Hoque took a phenomenal diving catch running in from deep midwicket to dismiss Anna Peterson. New Zealand folded to be bowled out with 10 balls left in the innings.

Bangladesh’s required run-rate was just 4.55 for an historic victory. They started the chase well thanks to two classy strikes down the ground from Murshida Khatun, a dropped catch at slip from Amelia Kerr and a wayward over from Lea Tahuhu that featured four wides. At 0 for 17 from 2.5 overs, Murshida fell to a top edge trying to sweep Leigh Kasperek. Devine and New Zealand then squeezed Bangladesh over the next six overs. Devine took all the pace off turning to Hayley Jensen and her spinners. Ayasha Rahman holed out trying to clear the infield off Jensen. Devine attacked with her field, posting a catching cover, a short leg and a slip at different stages. Bangladesh faced 41 dots in the first nine overs and did not find the boundary in the first three overs after the powerplay. The rate slowed so dramatically that equation reached more than a run-a-ball in the 10th over.

Salt in the wounds

Sultana held the key as Bangladesh’s leading run-scorer in the tournament, but she was forced to retire hurt in the 10th over after being hit in the face attempting to sweep Peterson. She got a top edge that ricocheted into her jaw, just underneath the grill of the helmet and she was driven off the ground on a cart. Bangladesh then did their own damage with two horrible run-outs. Hoque attempted to drop and run to cover but Moni called no and Devine swooped to leave Hoque stranded. She gave Moni a verbal spray on her way off for not responding, which was ringing in Moni’s ears two overs later when she over-committed anticipating a tight drop and run from Rumana Ahmed. The call to run never came despite Moni running halfway down and she was left stranded and staring at a dumbfounded Rumana. Devine turned the screws. Jensen pinned Rumana plumb in front and Sobhana Mostary holed out as the rate got out of hand. Kerr then produced a stunning wrong ‘un to clean bowl Jahanara Alum for a first-ball duck. Sultana returned to bat with Bangladesh eight wickets down and 35 runs needed from just 20 balls. She found the boundary twice but picked out Devine in the last over with all hopes dashed.