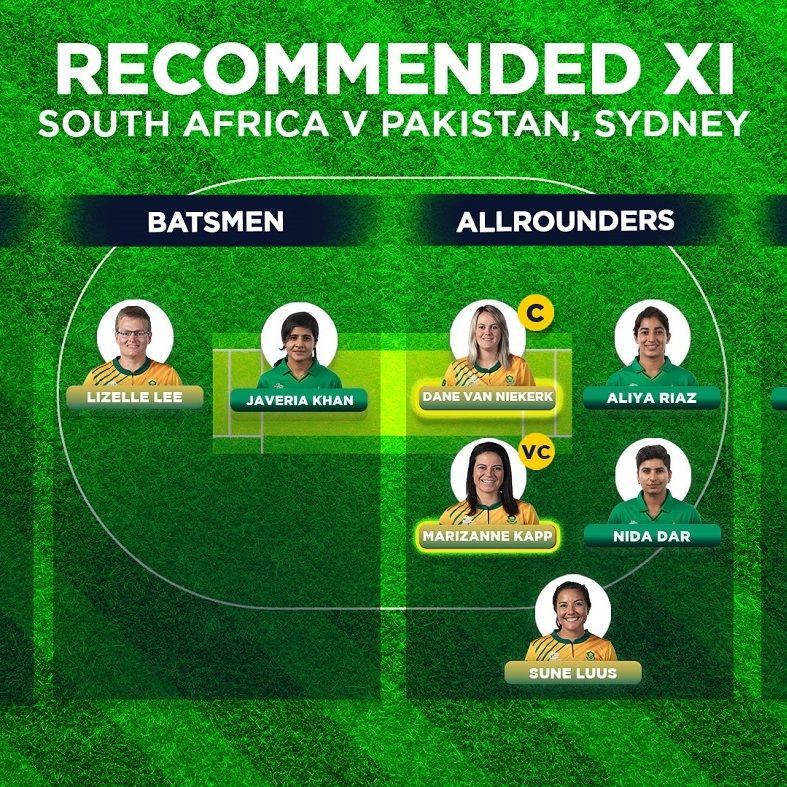 Van Niekerk had a rare failure in the last game against Thailand but we are sure it was a one-off. Van Niekerk has scored 209 runs against Pakistan in T20Is at an average of 69.66 and a strike rate of 102.95. She has also picked up seven wickets and has an economy rate of 4.22 against them, making her the obvious captain choice.

Kapp missed the last game but she should be back, and is an experienced player who should do well in big games. She has been in good form scoring 148 runs and picking up six wickets in her last five T20 matches, and being a top-order batter who bowls four overs, she is an excellent vice-captain pick.

Lizelle Lee: Lee has just scored her maiden T20I hundred and the game against Pakistan couldn’t have come at a better time for her: in the recent T20I series against Pakistan, Lee scored 193 runs in five innings at a strike rate of 140.87.

Shabnim Ismail: The spearhead of the South Africa bowling line-up has definitely lived up to her expectations. She hit the Thailand batters hard in the previous game and her figures in this World Cup so far are 7.1-1-34-4. She is a must-have.

Sune Luus: Luus got the opportunity to bat at No. 3 against Thailand in the absence of Kapp and grabbed it with both hands. She scored a blistering 41-ball 61 to help South Africa score that record 195, and also picked up three wickets.

Aliya Riaz: Riaz was the only batter who showed resilience against England, and also picked up the wicket of Natalie Sciver. She didn’t get to bat against the West Indies so we don’t have a large sample size when it comes to her, but her all-round abilities make her a value pick.

Diana Baig: Baig has easily been the pick of the bowlers for Pakistan. She has three wickets in the two games so far and has an economy of just 5.63 even though she bowls most of her overs in the powerplay. Two out of her three wickets so far have come in the first over of the game.