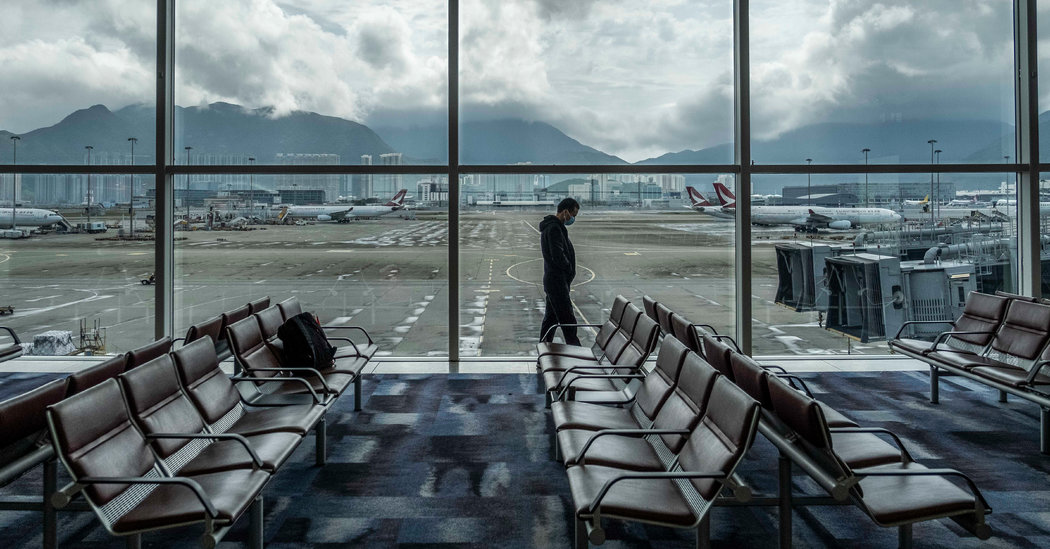 As the coronavirus outbreak spreads, the world’s biggest companies have begun painting a bleak picture of broken supply chains, disrupted manufacturing, empty stores and flagging demand for their wares.

The announcements by businesses like Mastercard, Microsoft, Apple and United Airlines offer a reading on how the virus is affecting consumer behavior and business sentiment. These corporate bulletins — and what executives do in response — could determine how much economic damage the outbreak inflicts and whether a recession looms.

Some companies have expressed optimism that governments will curb new infections and that consumer spending in Europe and North America will be largely unscathed. But if executives see a threat beyond the first three months of the year, they may pare planned investments and even start laying off workers. That, in turn, would further dampen economic activity.

The stock-market plunge this week, the steepest since the financial crisis, suggests that investors are bracing for a lot more bad news.

“Everything is slowing down even more — and that has not been fully appreciated,” said Michael O’Rourke, chief market strategist at JonesTrading.

The correction in the S&P 500 stock index — a decline of 10 percent or more from a recent peak — was its fastest ever. In the midst of the sell-off, analysts at Goldman Sachs said they expected that the companies making up the S&P 500 would collectively show no profit growth this year. The bank had previously forecast a 6 percent increase in earnings.

A major vulnerability for businesses in the United States and Europe is their increasing reliance on China as a supplier and customer over the last 10 or 20 years.

Since the Lunar New Year holiday in China a month ago, many workers have been homebound, disrupting factories that assemble electronics or make automotive parts. Microsoft said this week that the virus had hampered production of its laptop and tablet computers, and it cut its sales forecast for the division that makes those products, scrapping a projection it had issued just a few weeks earlier.

The supply-chain problems have started to affect American homebuilders as well. A senior executive at Toll Brothers said the virus appeared to have delayed the supply of lighting parts.

At the same time, Chinese consumers are buying less. Apple said the closing of stores in China would depress sales of iPhones and other devices.

Mastercard cut its growth forecast in part because people are taking fewer international trips. Fear of the virus has prompted companies like Amazon and Nestlé to suspend international travel by some employees. That drop in demand, combined with their own concerns about the virus, has prompted United and other airlines in the United States and Europe to cancel flights to cities in China and elsewhere in Asia.

On Friday, United said an investor briefing scheduled next week would be postponed until September. Citing concern over the virus, the airline said it “does not believe it is practical to expect that it can have a productive conversation focused on its long-term strategy.”

Companies may also struggle because investors are becoming more reluctant to lend them money. Appetite for new bonds, especially those issued by less-creditworthy businesses, has fallen off. Banks may also have to tighten lending standards. In a sign that investors believe the coronavirus concerns could hit banks hard, the stocks of the three largest U.S. banks — JPMorgan Chase, Citigroup and Bank of America — are all down by a lot more than the S&P 500 so far this year.

Of course, the coronavirus outbreak could end up resembling other brief shocks that have landed only glancing blows on companies and the stock market. These include the fiscal battles of the previous decade that consumed Washington and Wall Street for weeks at a time.

And as recently as Friday, some companies were predicting that their sales would hold up just fine. Volkswagen, the German auto giant, said it expected deliveries this year to be “in line” with 2019. And Apple said conditions were gradually returning to normal in China. “It feels to me that China is getting the coronavirus under control,” Tim Cook, Apple’s chief executive told Fox Business on Thursday. “When you look at the parts that are done in China, we have reopened factories.”

Some Wall Street analysts have expressed optimism that the Federal Reserve and other central banks will cut interest rates to help offset the economic stress caused by the virus. Such cuts would help lower borrowing costs, giving consumers a fresh incentive to spend and businesses to invest.

Those hopes were buoyed when the Fed chair, Jerome H. Powell, unexpectedly issued a statement on Friday saying the central bank would “act as appropriate to support the economy.” Economists at Bank of America wrote on Friday that they expected the Fed to cut rates by half a percentage point at its March meeting “as a way to stem panic.”

Some companies are already talking about how much business will come their way when the outbreak begins to recede — including Las Vegas Sands, which has major interests in the Chinese gambling haven of Macau.

Some analysts appear to be banking on warmer spring weather to curb the virus’s spread. “Fear will subside as the weather warms up, hopefully,” said Barry Bannister, head of equity strategy at Stifel.

For now, though, investors seem to be expecting things to get worse. After finishing down 0.8 percent on Friday, the S&P 500 lost about 11.5 percent of its value this week, its worst one-week performance since the financial crisis of 2008.

Some investors sit on the sidelines when they feel unequipped to assess financial risks.

A big concern is that the virus will spread quickly in Europe and the United States, forcing consumers to stay home from work, not to mention avoiding stores, restaurants or other businesses.

In that case, an economic contraction could become inevitable. Should a recession develop, the Goldman analysts said, profits of S&P 500 companies are likely to fall this year by 13 percent. Such a decline could force companies to lay off employees and put off new investment.

Even before the coronavirus outbreak, business investment was already pallid in the United States. It fell in the last three quarters of 2019. Some analysts now expect more companies could soon announce reductions in their capital spending. “I think you will see that when they report their Q1 numbers,” Mr. O’Rourke of JonesTrading said.