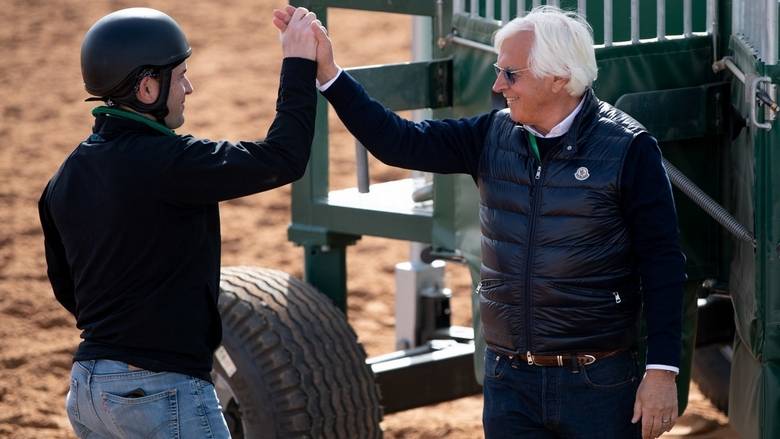 The line-up includes many big names

Each and everyone is eagerly looking forward to the inaugural Saudi Cup and while that will be the showpiece of the race weekend, the inaugural event will also witness an exciting appetiser.
Apart from top horse racing connections and horses and trainers that have assembled here in the Saudi Arabian capital, the King Abdulaziz Racetrack, on the outskirts of Riyadh, will host the $1.6m Kingdom Day STC International Jockeys Challenge on Friday.
The Challenge will see seven male and seven female top riders from around the world get things going ahead of the big event.
The stellar line-up includes the most successful Breeders’ Cup jockey of all time American Mike Smith, Italian superstar Frankie Dettori, 11-time British Classic-winning rider Ryan Moore, Japan’s Yutaka Take and Nanako Fujita, French sensation Mickaelle Michel, three-time New Zealand Champion Lisa Allpress and four-time Breeders’ Cup-winning Frenchman Olivier Peslier, and, from America.
Other contenders include USA Grade 1 winner Sophie Doyle as well as the reigning British all-weather champion apprentice Nicola Currie and the Swiss-born German-based Pattern-winning rider, Sibylle Vogt.
Canadian legend Emma-Jayne Wilson, winner of over 1,500 races in North America, completes the line-up alongside two top Saudi Arabian-based jockeys  Adel Alfouraidi and a second local rider that will be decided following the results of this weekend’s racing.
Panama’s Wigberto Ramos, the recent King’s Cup winner, had been due to ride but was unable to take up his spot after sustaining a fall on Wednesday.
The Jockeys Challenge, the first of its kind to be held in Saudi Arabia, is the main draw of Kingdom Day. It will be held over four races of an eight-race card. Each leg of the Challenge carries a prize fund of $400,000, while the overall winning jockey stands to earn a further $30,000 winner’s purse.
“We are delighted to welcome some of the best jockeys in the business to compete at the first STC International Jockeys Challenge,” said Prince Bandar Bin Khalid Al Faisal, Chairman of the Jockey Club of Saudi Arabia.
“Racing is a sport that routinely sees male and female riders compete on a level playing field and we are proud to continue this great tradition at King Abdulaziz Racecourse during Saudi Cup weekend,” he added.
Jockeys were assigned horses prepared locally by Saudi-based trainers, through a draw process held on Tuesday.
Races will be run on the dirt course and will be contested over 1400m, 1600m, 1800m and 1200m.
james@khaleejtimes.com
HOW THE INTERNATIONAL JOCKEYS CHALLENGE WORKS:
The following points will be given to each jockey according to the placing of his or her mount and the ranking of each jockey will be determined by the total number of points earned over the four races.
1st 15 points
2nd 10 points
3rd 7 points
4th 5 points
5th 3 points
The jockey with the most points after the four races will be declared the STC Champion Jockey.