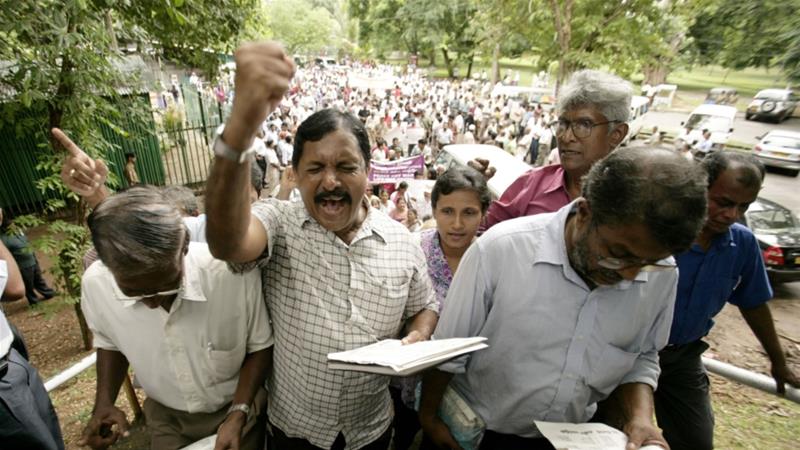 US imposed sanctions against Lt General Shavendra Silva for extrajudicial killings at the end of Sri Lanka’s civil war.

The United States has blacklisted Sri Lanka’s army chief, Lieutenant General Shavendra Silva, over accusations of human rights violations including extrajudicial killings during the country’s civil war. He is no longer allowed to enter the US.

“I am designating Shavendra Silva making him ineligible for entry into the US due to his involvement in extrajudicial killings during Sri Lanka’s Civil War,” US Secretary of State Mike Pompeo said in a tweet on Friday.

“The US will not waver in its pursuit of accountability for those who commit war crimes and violate human rights” Pompeo added.

In an earlier statement, he said that allegations of gross human rights violations against Shavendra Silva had been documented by the United Nations and other organisations.

US sanctions imposed on Friday by Washington bar both Silva and his immediate family members from entering the US. Sri Lanka’s Ministry of Foreign Relations urged Washington to review its decision, adding that there were “no substantiated or proven allegations of human rights violations against him”.

“The Government of Sri Lanka takes strong objection to the imposition of travel restrictions on Lieutenant General Silva and his immediate family members by the Government of the United States, based on independently unverified information,” the ministry said in a statement.

Silva’s appointment as army commander of the island nation in August drew sharp criticism from the US and the UN, which later suspended the Sri Lankan army from its peacekeeping operations.

Silva led an army division against Tamil Tiger rebels in the final phases of Sri Lanka’s 26-year-long civil war. The war ended in 2009. His victory, however, was highly controversial. Thousands of civilians were killed in the last phases of the conflict. The deaths also occurred in government-declared “no-fire zones”. Some of the zones – including hospitals – came under sustained army shelling.

A UN panel accused Silva’s division of suspected extrajudicial executions of unarmed rebels in the final week of the war. Silva is also accused of systematically torturing people in government custody.

In August, Michelle Bachelet, the UN’s High Commissioner for Human Rights, said that the promotion of Lieutenant-General Silva “severely” compromised Sri Lanka’s commitment to promote justice and undermined reconciliation efforts “in the eyes of victims and survivors who suffered greatly in the war”.